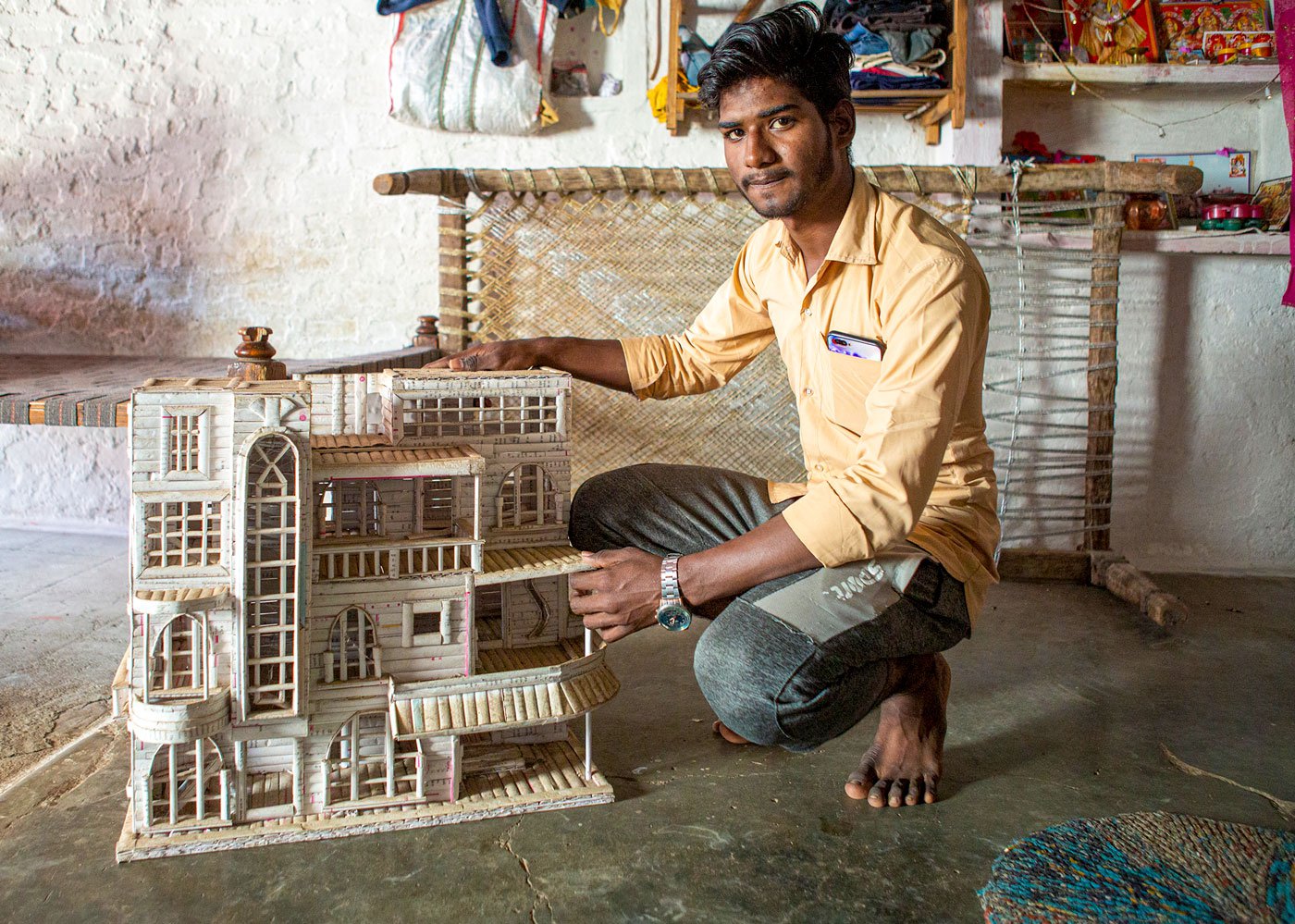 Displaced by design, architect by instinct

Jaypal Chouhan, 19, of Karoli village in Madhya Pradesh, makes elaborate self-taught models of houses using only paper and glue – and recalls how his own childhood home was submerged by the Omkareshwar dam

In Jaypal’s two-room brick house with a tin roof, there are several other more grand houses. These have multiple floors, tall columns, balconies and turrets.

And they are made of paper held together by glue.

For the last 4-5 years, Jaypal Chouhan, 19, has been spending some of his mornings and afternoons at home in Karoli – his village in Khandwa district of  Madhya Pradesh – carefully rolling paper tubes and placing them on top of each other like a stack of bricks to make walls, then joining them together with glue to create castle-like structures.

“I have always been interested in buildings and how they are constructed,” he says.

Jaypal began with making cardboard models of temples when he was around 13. He had attended a wedding in another village where he saw a small glass temple in someone’s house – and that intrigued him enough to try and put together one of his own using cardboard. He made a few, gifted them to relatives, and even won a prize for a model at a school exhibition in 2017.

He also won a prize in school for a cardboard motorbike. And his collection of such items includes a table fan, a race car, and a crane with wheels taken from an old toy. 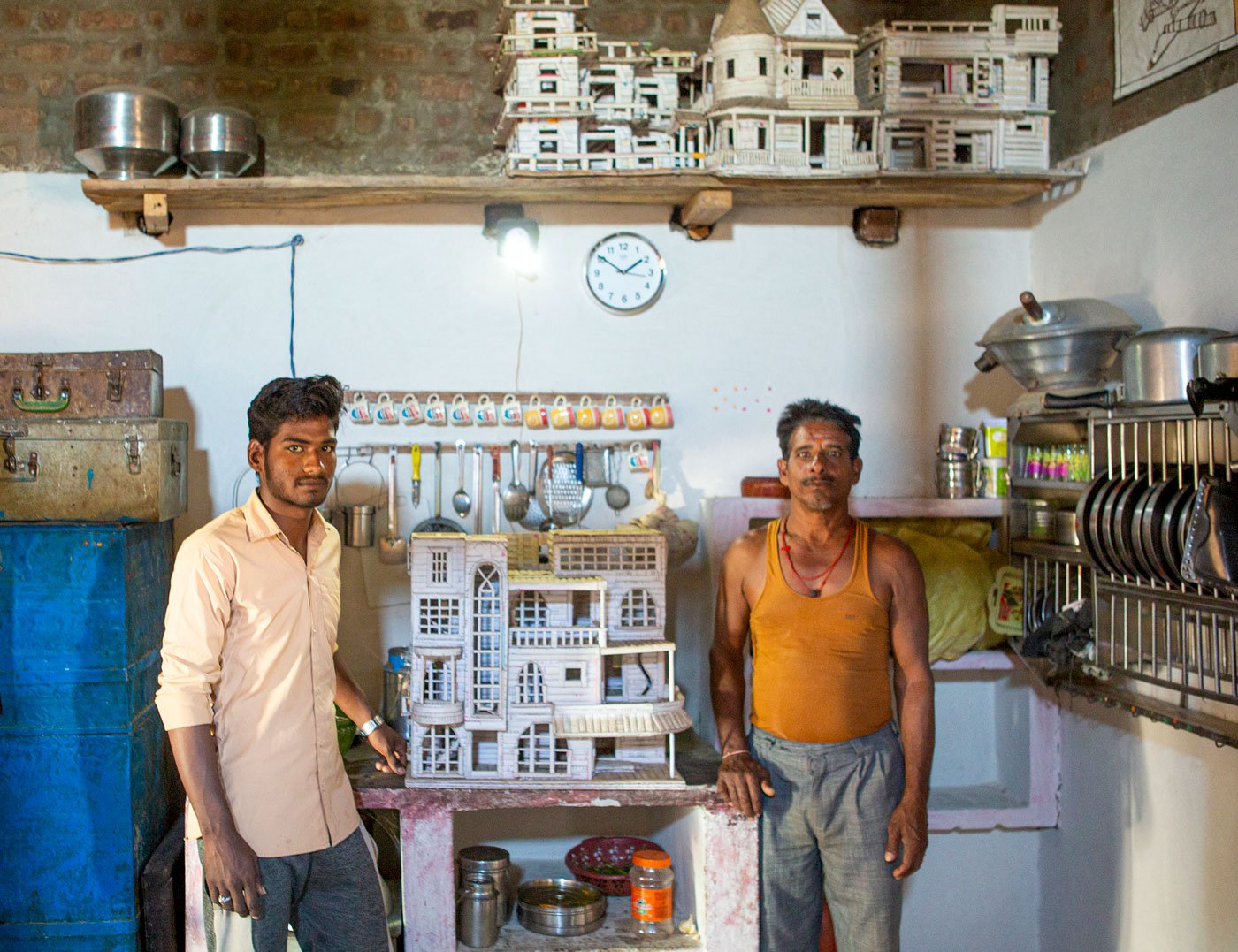 Jaypal with one of his paper creations; he also designs doors made by his father Dilawar Chouhan (right), a carpenter

“But over time the cardboard started to bend due to humidity,” Jaypal says. “Then one day I thought I would make better use of old [school] books kept in the house to be sold off as scrap. It was a sudden idea. I started rolling their pages into tubes and making these big [house] models.”

The new cement houses being constructed in Karoli, his village in Punasa tehsil , are his starting point for ideas. “The people who are making new houses are inside the village, while we [his family], and those who work on other’s fields are outside the village and still live in kaccha houses,” Jaypal says. “But I don't like the designs of any of the cement houses fully. So I mix and match two-three ideas. If the designs are simple, then it looks very plain, but if it’s an unusual design then I like to make it into a paper model.”

He looks for houses that don’t have just standard doors and windows but are embellished with cut-outs and ornamentation. For one of the models that he adapted, he says, “I made the top floor like a house in the village but the ground floor is different.” This design was inspired by the house of a local teacher who gave him waste notebooks from his school. But these had numerous pictures and cartoons, which Jaypal says looks odd on the paper models. So he got got old books and notebooks from another nearby government school.


“I don't make any [architectural] plans or designs, I just start making the houses directly,” Jaypal says. The first few were gifted to relatives, but when people started visiting his home to look at the models, he stopped giving them away. He has not sold any of them yet – and a few are now on display in his house. 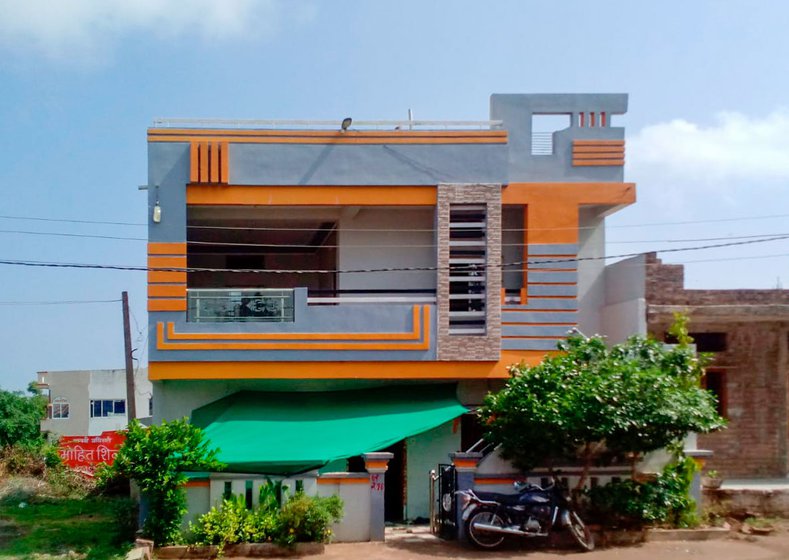 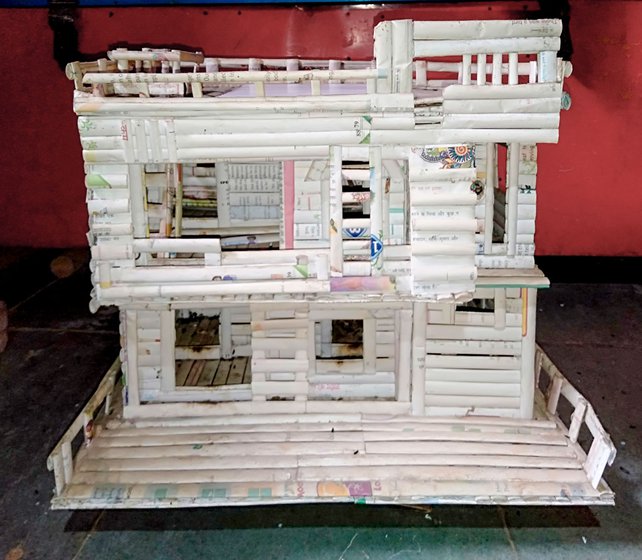 He looks for houses that have some ornamentation. This design (right) was inspired by the house (left) of a local teacher who gave him old notebooks

Depending on the intricacy of the model, and the time he gets to work on them, it takes Jaypal anything between 4 and 20 days to create a house out of paper – each around 2 x2 feet in height and depth, with a width of around 2.5 feet.

When not creating castles, Jaypal studies – he recently completed Class 12 [online during the pandemic] at a school in a nearby village. And he works with his father, Dilawar Singh Chouhan, 45, a carpenter who makes tables, chairs, swings for kids and other furntiure, as well as door frames and thresholds ( chaukhats ) in Karoli and in neighbouring villages and towns.

Jaypal says he is not interested in woodwork, but he helps with the designs of the doors and windows, with handling the tools and fixing corrugated roofs. “I have designed three doors in a nearby village, two in Karoli,” he says. “I take many references from the internet and online magazines and try to make a unique design – at times on paper, but most of the time directly on the wood – and my father then makes it.”

At other times, Jaypal also works with brother-in-law (sister’s husband), a tailor in a village around 60 kilometres away. He occasionally goes there and pitches in with cutting fabric or  sewing trousers.

Japypal’s mother, Raju Chouhan, 41, is a homemaker. In the past, she too worked on tasks in the family’s carpentry trade. “If they were making a charpoy , she used to make the legs while my dad worked on everything else,” Jaypal says. But the family’s economic condition has since somewhat improved, and she does not do this work anymore. 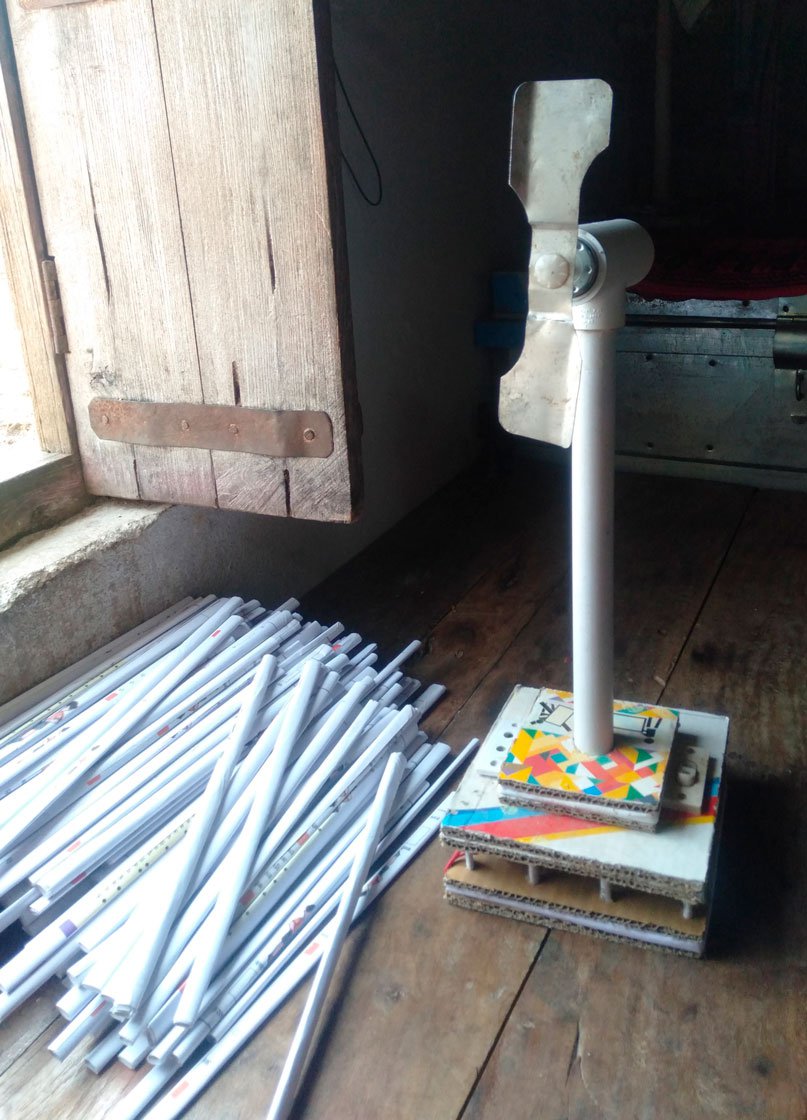 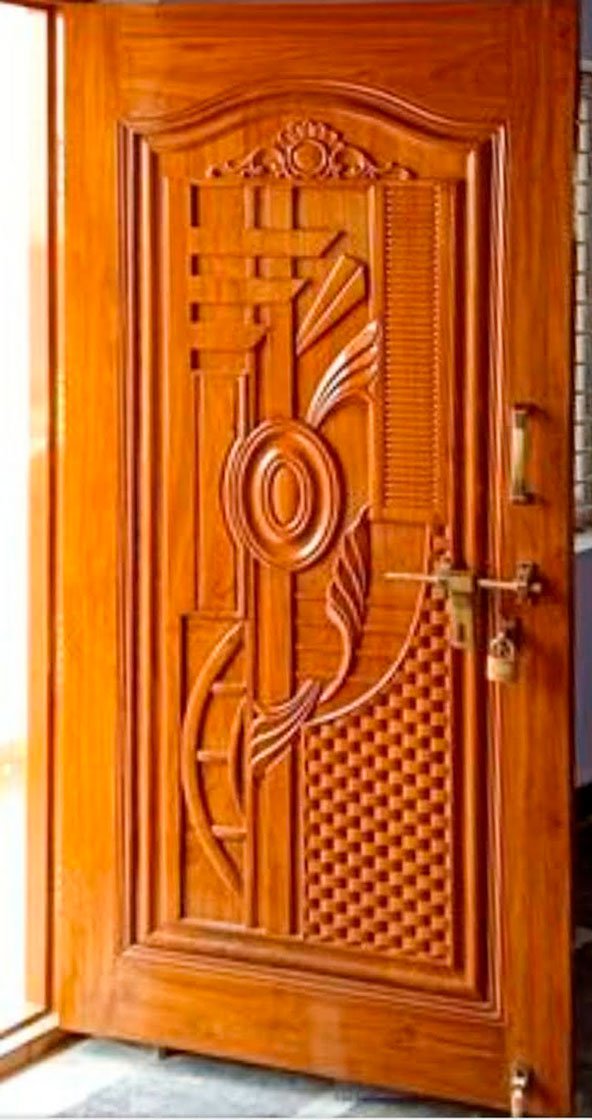 Japyal's collection of hand-made items includes a table fan; he also designs some of the doors that his father makes in wood

His mamaji (uncle), Manohar Singh Tanwar, a farmer, supported Jaypal’s model-making the most. He used to live next door and brought all his guests to show them his nephew’s work. This uncle passed away last year, possibly due to dengue.

Both Dilawar and Raju too support their son’s dedication to model-making. “I am not literate but I think he is on the right path, and many people come and see his work,” Dilawar says. “I want him to study for as long as he can and I will support him in whatever way I am capable of. I tell him that even if I have to sell my land and house to support his studies, I will. Because land can come again but his time to study won’t.” Raju simply tells me: “Please take care of him. We don’t have much, he is the only child with us, his [two] sisters are married."

While Jaypal models now adorn their home, his family’s journey is marked by displacement. In 2008, they had to leave Toki, their village around three kilometres from Karoli, when it was to be submerged by the overflow of the Omkareshwar dam.

The family was asked to relocate to another village around 10 kilometres away, but Dilawar refused to move there because it was remote and barren. “There were no shops there either, there was no work,” Jaypal says. His father then bought a small plot in Karoli with the compensation given by the government. That's the house they are living in now. Dilawar also inherited two acres of land from his father, located around 80 kilometres from Karoli, where the family cultivates mainly soyabean, wheat and onions. 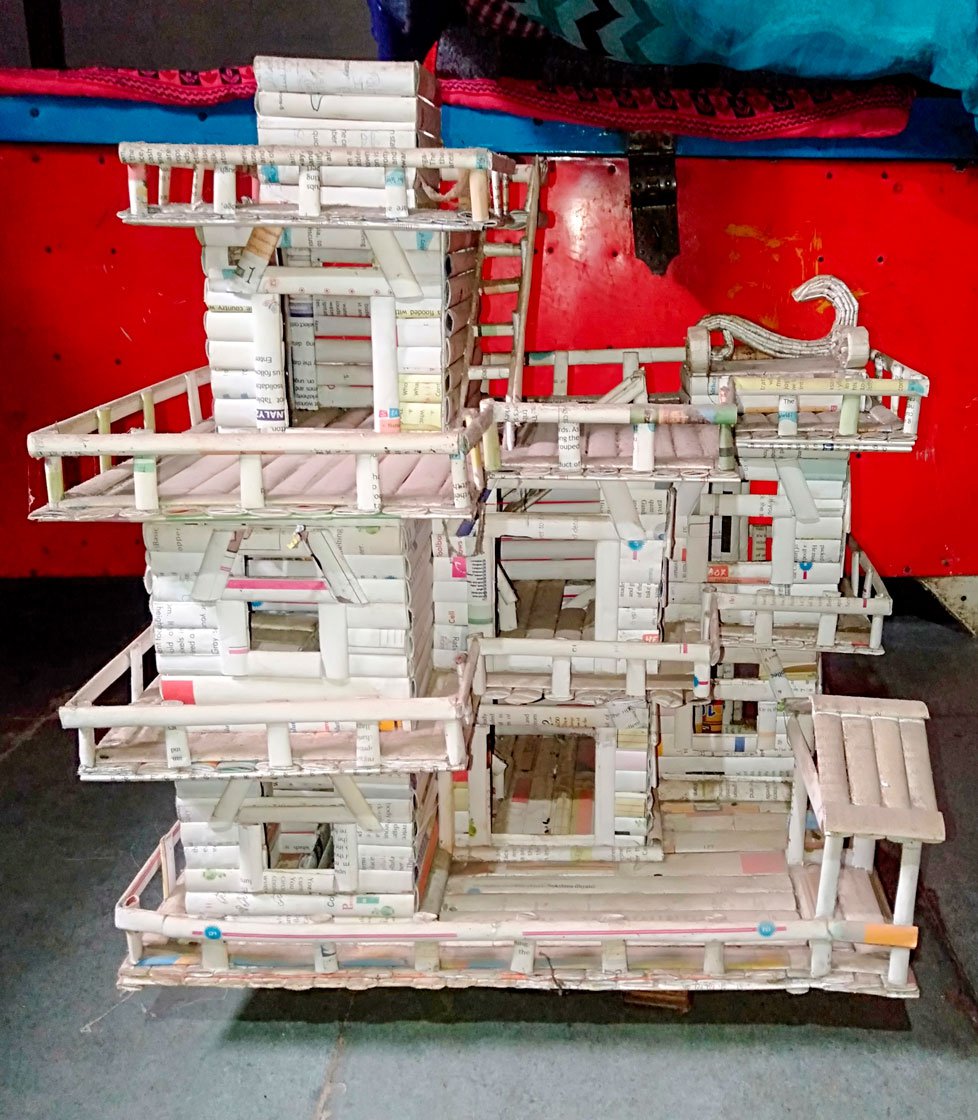 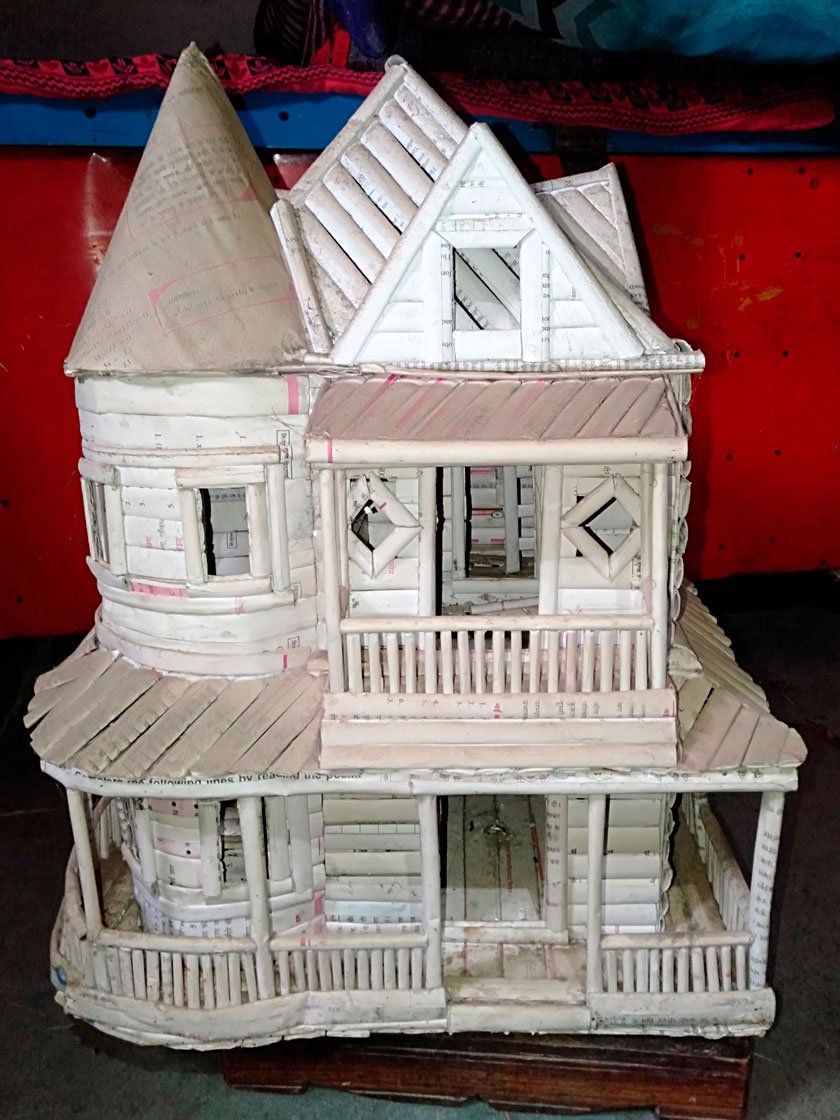 'I don't make any [architectural] plans or designs, I just start making the houses directly', Jaypal says. The first few were gifted to relatives, but when people started visiting his home to look at the models, he stopped giving them away

Jaypal has only a faint memory of the modest mud-and-tin house of his birth in Toki village. “I don't remember it much. Now when I am making models, I can't go back to see it because it's submerged. But I am thinking of making a model of my present, small house.”

The family could however could be displaced from this house too because the plot of land is near a street that the government reportedly has plans to expand into a six-lane road. “We will then have to once again go somewhere else,” Jaypal says.

He is planning to study further and wants to become a civil engineer because of his interest in building structures, and due to the prospects of getting a government job with that qualification.

Recently, he has started making a model of the Taj Mahal. “Anyone who came to our home and saw the models would ask me if I've made Taj Mahal or not,” he says. It will require a lot of paper – but the grand monument is taking shape. And over time other replicas will emerge too – each one created with skill and patience, and glue and loads of discarded paper.

Nipun Prabhakar is a documentary photographer based in Kachchh, Bhopal and Delhi. He is also a trained architect and works extensively with local communities.

Other stories by Nipun Prabhakar