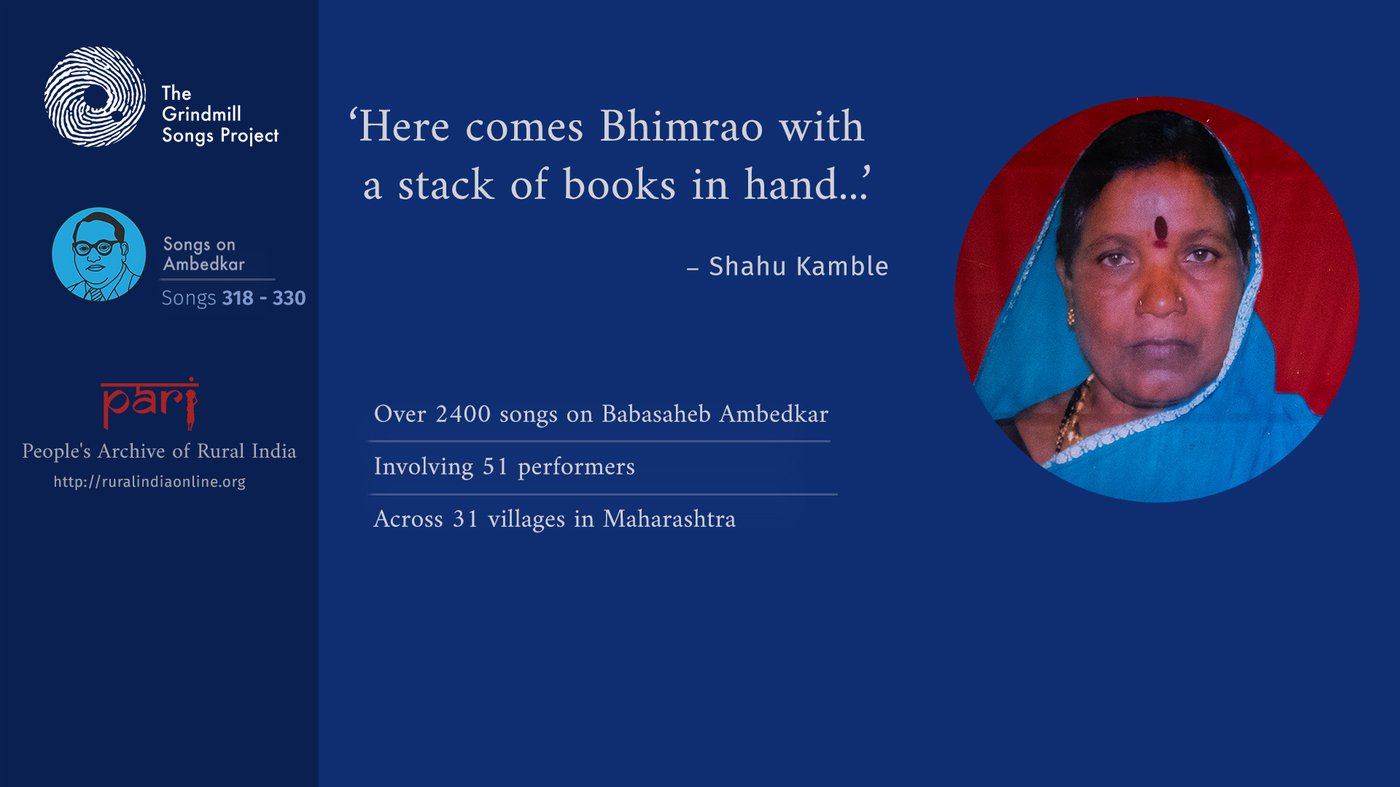 Bhimrao: 'A diamond born to his parents'

On the 130th birth anniversary of Dr. B.R. Ambedkar, this collection of songs by Shahu Kamble of Pune's Nandgaon village celebrates what he accomplished in his fight for social justice and equality

I’m sprucing up my home, the neighbour asks, “What’s so special today?”
Ambedkar and Ramabai have come as my guests, I tell her

In this ovi , Shahubai Kamble sings about the joy of having Dr. B.R. Ambedkar and Ramabai visit one’s home. Her songs in this instalment of Grindmill Songs Project, on Dr. Ambedkar's 130th birth anniversary, convey admiration and affection for him – the leader who fought for the basic human rights of people oppressed for centuries in a society structured by Hindu casteism.

Shahubai lived in Nandgaon village in Pune district. In mid-1990s, she performed about 400 songs for the original Grindmill Songs Project team. But, in September 2017, when the PARI GSP team went to meet her in her village in Mulshi taluka , we were dismayed to learn that Shahubai had died of uterine cancer a year earlier.

She was a farmer, a midwife and the mother of two daughters and two sons. A Dalit Buddhist and a follower of Dr. Ambedkar’s Neo Buddhism, Shahubai was not formally educated. “But she had a great talent to set songs to melodious tunes,” says Kusum Sonawane , her friend and sister-in-law, also from Nandgaon and a singer of grindmill songs.

Affectionately called ‘Babasaheb’ by his followers, Dr. Bhimrao Ramji Ambedkar experienced humiliating caste discrimination during his school years. He was made to sit on the floor outside the classroom’s entrance, away from the other students and was not even allowed to touch the drinking-water pot – only students of upper castes could drink from it.

Born on April 14, 1891, in Mhow, a garrison town close to Indore, now in Madhya Pradesh, Dr. Ambedkar was the 14th child of his parents Ramji and Bhimabai Sakpal. Ramji, his father, worked in the British Indian Army. The family was originally from Ambadawe village, Ratnagiri district, in Maharashtra’s Konkan region, where a young Bhim was sent to school. His teacher, Krishnaji Ambedkar was so impressed by the boy’s sharp intellect that he changed his student’s surname to his own – Ambedkar. 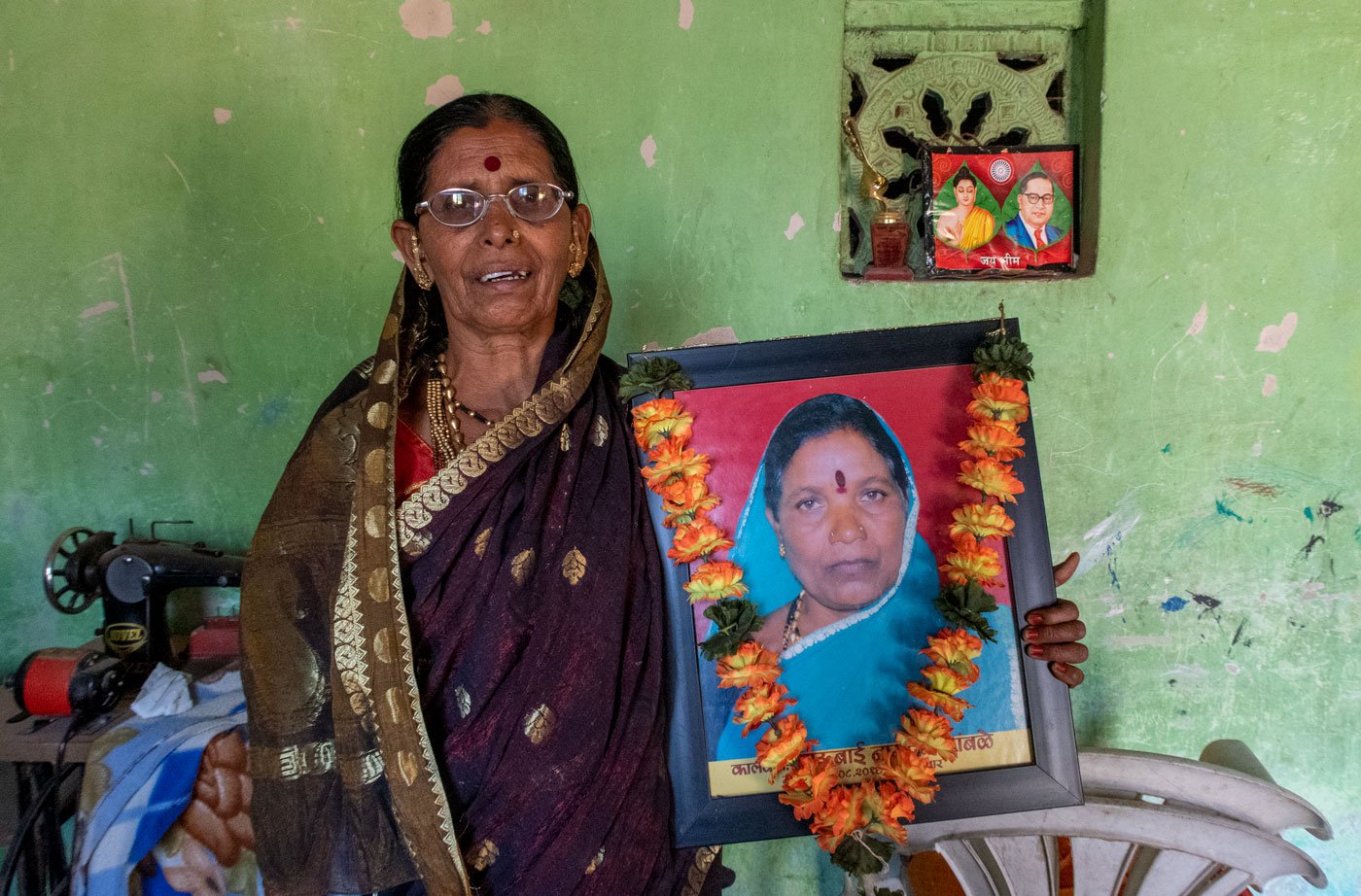 Kusum Sonawane (with Shahu Kamble's photo), says that the late Shahubai had a talent for setting songs to melodious tunes

Bhimrao completed matriculation from Mumbai at Elphinstone High School and then obtained a BA from Elphinstone College, University of Bombay. In 1913, he went to the United States, where he attained an MA, majoring in Economics at the Columbia University, New York. He returned to the university later to submit his thesis and received a PhD in 1927. In the years in between, he travelled to England, where he simultaneously worked on a doctoral thesis at the London School of Economics and Political Science and studied Law at Gray’s Inn.

His experiences and education would qualify and enrich him for the role he later played as a political leader and the chief architect of the Indian Constitution. Dr. Ambedkar led many fights for the rights of those ground down by caste. In one of the most famous protests he led, he broke the taboo of untouchability by drinking water from Chavdar Tale, a public water tank in Maharashtra’s Mahad district, on March 20, 1927.

Of the 13 ovi that Shahubai sings for the revered and respected leader, the first eight couplets applaud Dr. Ambedkar’s public persona and life. The singer admires the social status achieved by Bhimrao as he arrives in a car that has a bonnet with a front grill. She expresses her wonder that such a ‘diamond’ was born to his parents. His status, she describes, is almost regal, symbolised by the tassels on his umbrella as he leads 90 million Dalits.

Although he lives no more, the narrator pleads, “Don’t say ‘Bhim is dead’, for he has given us the sign of the blue flag”. The flag, with an Ashoka chakra at the centre, was chosen by Dr. Ambedkar for the All India Scheduled Castes Federation, a political party he founded in 1942. For Dalits, the flag is a symbol of political and social strength and unity.

The singer then says that Bhimrao comes with a stack of books, wearing suit, socks and shoes, to fight for 90 million people in court, while Gandhi is in jail. 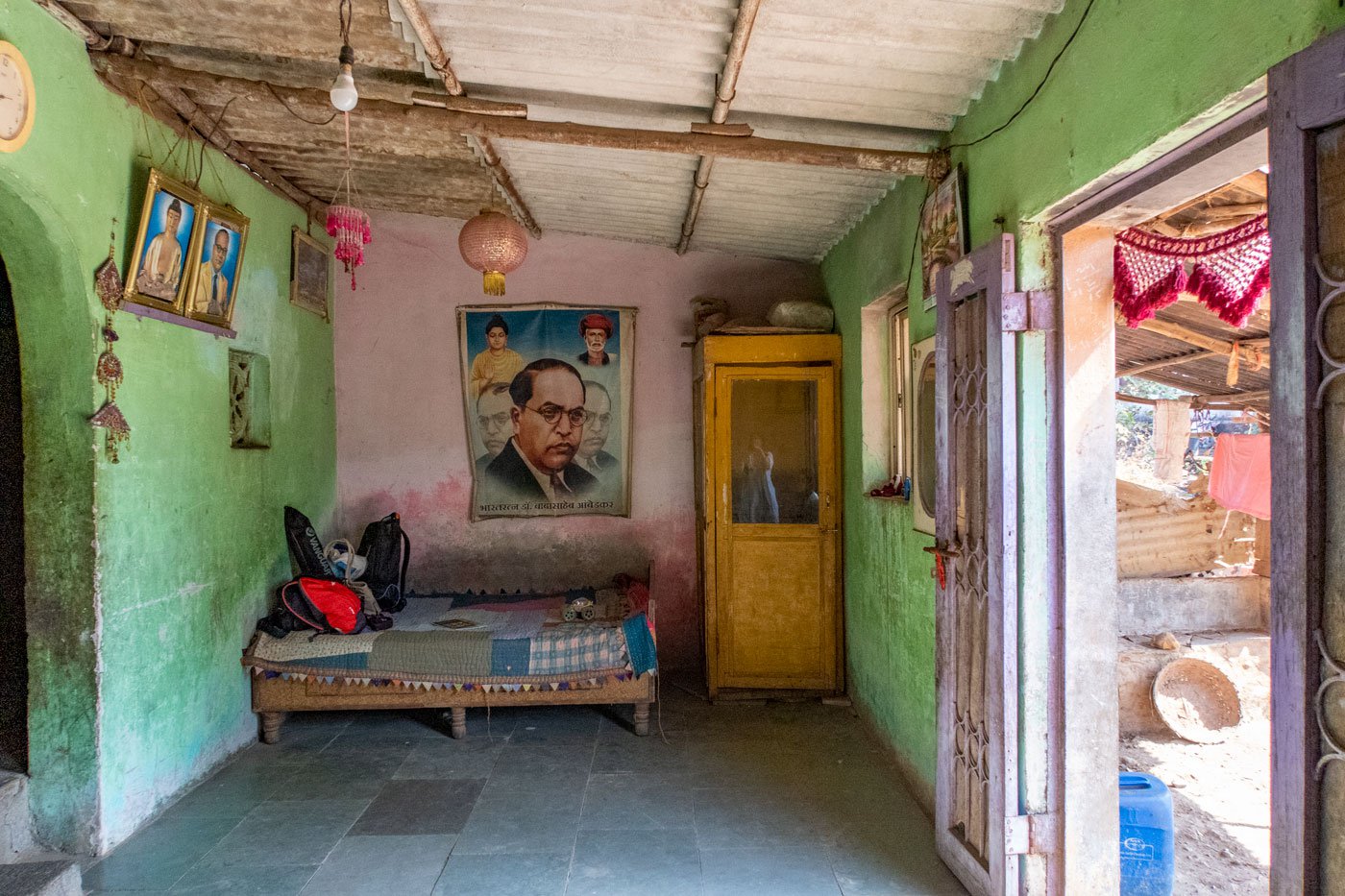 These songs probably draw from events around the Poona Pact, the agreement between Dr. Ambedkar and Gandhi signed in 1932 after the British administration in India announced a separate electorate in central and provincial legislatures for the ‘depressed classes’ (Scheduled Castes). Gandhi, who was in Pune’s Yerawada jail at the time, was against the idea of a separate electorate, fearing a fissure in Hindu society. He went on a fast to protest against the plan. But Ambedkar fought for the rights of the oppressed. The leaders eventually agreed on joint electorate, but with reserved electoral seats for the depressed classes in provincial legislative assemblies.

In the seventh ovi , the narrator says, Bhimrao gets a room to stay whenever he arrives. He has become close to a Brahmin girl (a reference to his second wife, Dr. Savita Ambedkar, a Brahmin by birth). He comes in a car that has mirrors, which impresses upper-caste girls, she says. These details evoke pride and admiration because people of the Mahar caste, into which Dr. Ambedkar was born, were treated as sub-humans in the casteist society. But a section of the society admired him for his achievements, which was a great source of pride for the Mahar people.

The public recognition achieved by Dr. Ambedkar meant that the leader of the oppressed people had broken the caste barriers that Dalits were struggling to overcome. The fight continues even today, in the 21st century.

The ninth song describes the narrator cleaning and sprucing up her home to welcome Babasaheb and Ramabai (Dr. Ambedkar’s first wife) as guests. And in the last four couplets the singer expresses her devotion to Gautam Buddha, whose teachings were adopted by Dr. Ambedkar. The singer sees Buddha at her doorstep when she opens the door in the morning. She tells her son that rather than worshipping idols made of gold and silver, it is better to follow his teachings. She says, “Remember Buddha in the morning before setting out for the day’s work.”

Listen to the 13 ovi sung by Shahu Kamble

Here comes Bhimrao, with tassels on his umbrella
For ninety million people, he is standing at the frontier

Bhimrao is no more, but don’t say “He is dead”
He gave the sign of the blue flag to ninety million people

Here comes Bhimrao with a stack of books in hand
For ninety million people; [while] Gandhi is jailed

This is how Bhim arrived, wearing a pair of shoes
For ninety million people, he went straight to the court

Bhimrao arrives, he has a room to stay
He has grown close to a Brahmin girl

Thus came Bhimrao, his car has a mirror
The Brahmin girls are fascinated with this sight

I’m sprucing up my home, the neighbour asks, “what’s so special today?”
Ambedkar and Ramabai have come as my guests, I tell her

O woman, I spread cow dung and sprinkle water over a distance
God Buddha, please wait a while, I will perform an arati for you

Early in the morning, I open the door
I see Gautam Buddha in my courtyard

O woman, what should I do with the silver and gold idols
I tell you, my son, start working in the service of Buddha

First thing in the morning, one should say the name of Buddha
I tell you my son, only then set out for the work you have in mind 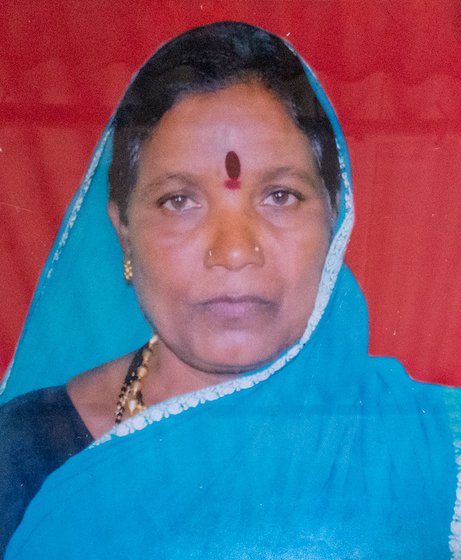