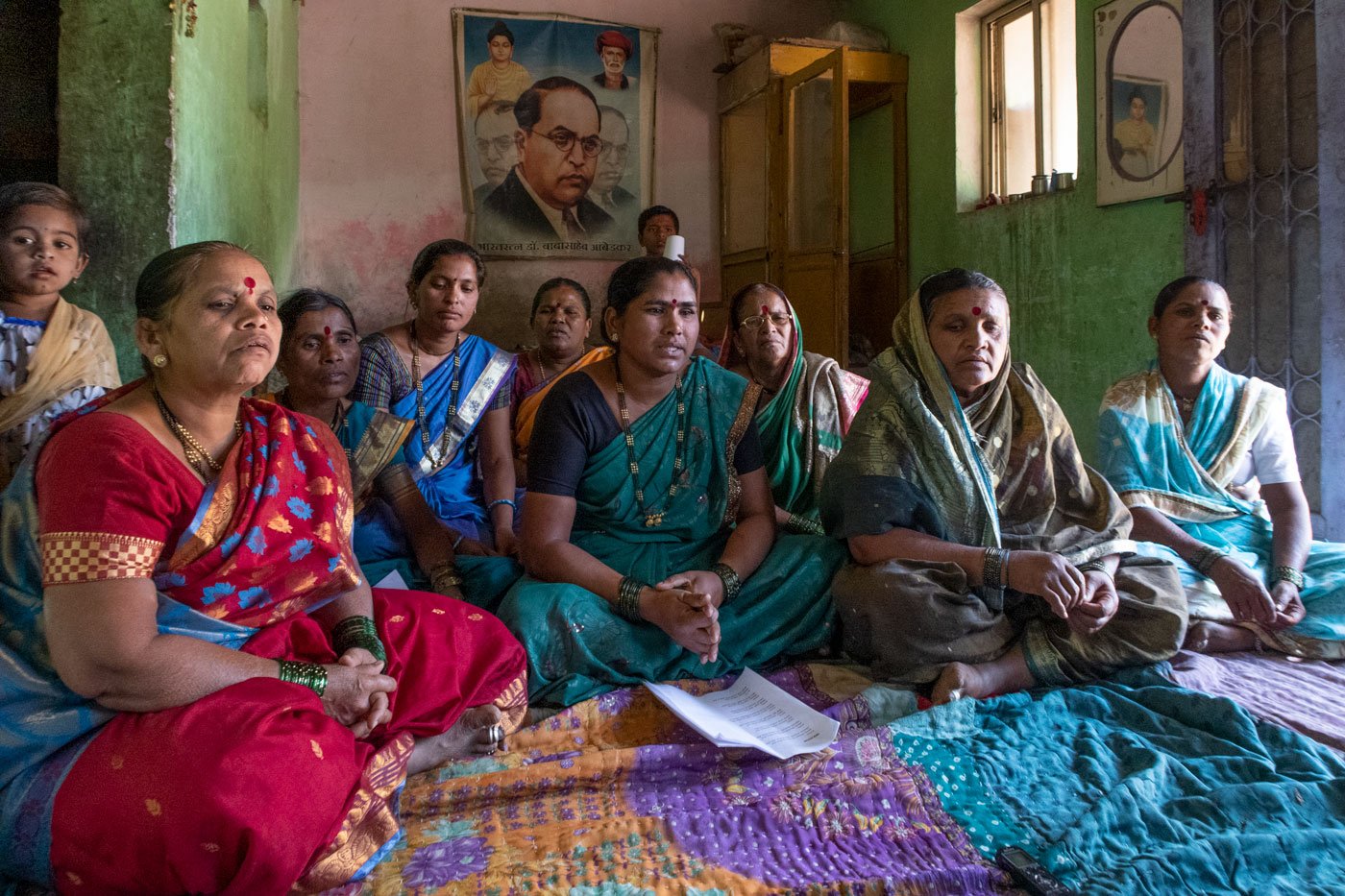 Ambedkar: ‘The diamond that lit up the sky’

Every year on April 14 – Dr. Ambedkar’s birth anniversary – women in Nandgaon village of Pune district sing a poem by Dhondubhau Shinde to mark an event that is important for all oppressed communities

“I’m feeling sad that this year there are no celebrations for Ambedkar Jayanti because of corona,” says Kusumtai Sonawane, in whose home we first recorded this rendition of the famous lullaby. That was back in March 2018 and it was sung by Pramila Kamble and others in Nandgaon village of Pune district’s Mulshi taluka .

Kusumtai, in her 70s, told me on the phone that the coronavirus crisis and the lockdown are most alarming. “I have never seen anything like this before. It really worries me. Our ration shops are open, but we have still not received any free rations that were promised.” On the day I talked to her, she was harvesting the crop of harbara (Bengal gram) in her field in the morning.

The women of Nandgaon sing these lines from a poem by Dhondubhau Shinde in a paalana (lullaby) about the birth of Dr. Bhimrao Ambedkar. The song brings to life the joys and aspirations of his parents Ramji and Bhimabai Ambedkar, and the celebrations in the village during the first 12 days in the life of the newborn Bhim, with a distinct verse for each day.

Dhondubhau lived in nearby Hadshi, his father Namdev’s village. But his mother, Bagubai Kamble, was from Nandgaon and inherited her parents’ home as she had no siblings. So Dhondubhau and his two brothers belonged to both Hadshi and Nandgaon. Dhondubhau passed away when he was in his 50s, over a decade ago. 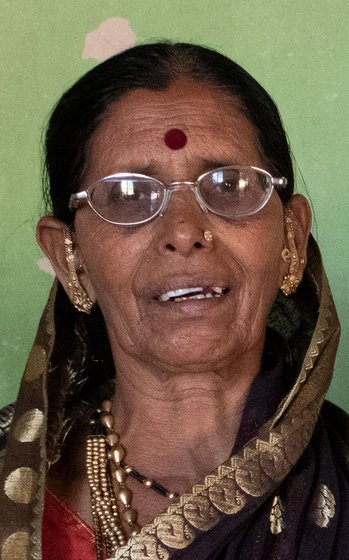 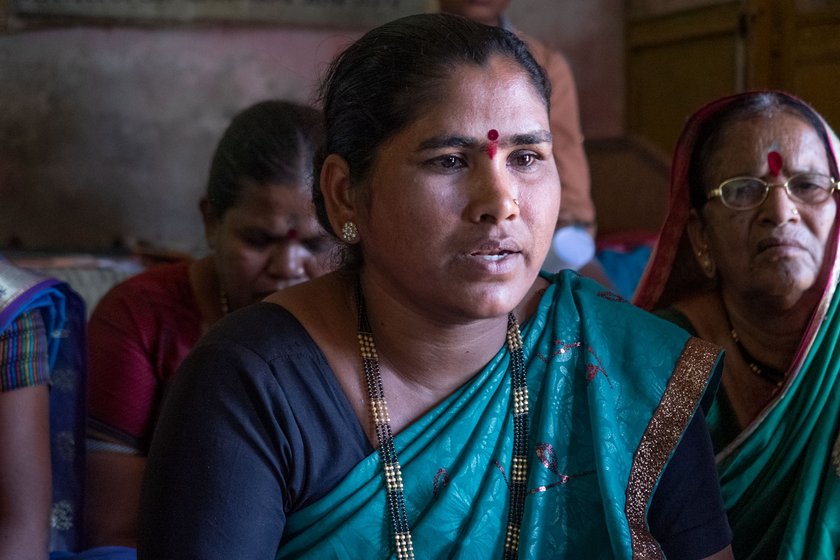 Left: Kusumtai Sonawane, in whose home the popular lullaby about Dr. Ambedkar's birth was recorded. Right: Pramila Kamble, lead singer of the group singing the paalana

“My uncle was a brilliant man,” says Bhau Shinde of the poet Dhondubhau, speaking on the phone from Nandgaon. “He went to school only till Class 4, but he wrote many poems, songs, folk songs, vag natya [folk plays]. In Nandgaon, we sometimes perform gharghuti tamasha [amateur plays] for our family, friends and neighbours. Besides being a farmer and a poet, my uncle was also very good with his hands – in gavandikaam [masonry] and sutarkaam [ carpentry].”

“A baby is not put into the cradle until a baarsa [naming ceremony] is performed on the 12 day after birth,” Kusumtai says. “On that day, the cradle is decorated and women sing this paalana as they put the baby in the crib.” Sometimes, they also sing it on a child’s first birthday.

(When we met them in March 2018, as part of the Grindmill Songs Project on PARI, the women also sang ovi , couplets in Marathi, about Babasaheb Ambedkar’s struggle for equality and on the Mahad Satyagraha and the fight against untouchability.)

Every April 14, the women sing this song, among many others, at events to mark Dr. Ambedkar’s birth anniversary. The celebrations go on in village after village until Buddha Purnima (Gautam Buddha’s birth anniversary) in early May. School children from Dalit communities also participate in the singing and in giving speeches about Babasaheb during these weeks, as well as on India’s Independence Day and Republic Day.

“We tell the children in our families the life story of Babasaheb,” says Kusumtai. “About his childhood, and how he faced discrimination. He could have just taken up a job and earned money for himself, but he didn’t do that. He worked day and night and brought our people together to fight for their rights, to be treated as equal human beings.” 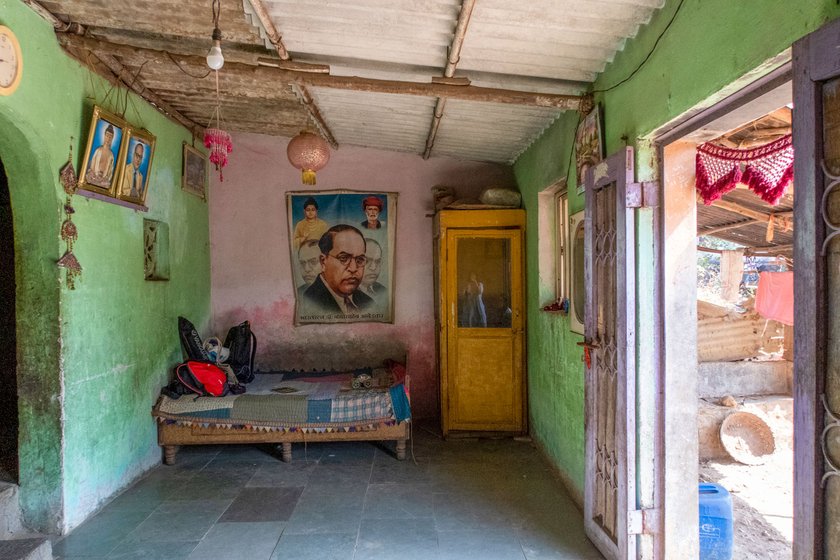 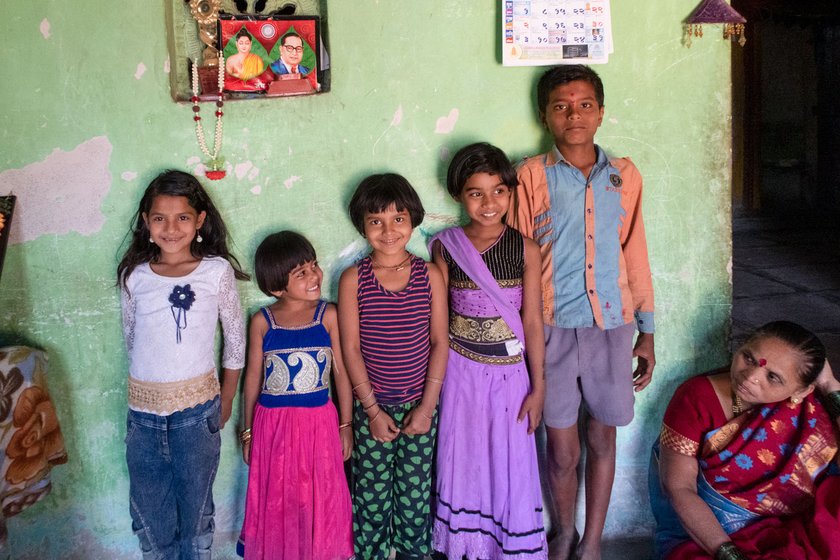 Left: A poster featuring Dr. Ambedkar in Kusumtai's home in Nandgaon. Right: Her granddaughters (second and fourth from left) with other children from the neighbourhood. 'We tell the children the life story of Babasaheb', says Kusumtai

An activist of the Garib Dongri Sanghatana, an organisation working with the poor in the hilly areas of Pune district, Kusumtai is deeply involved in community activities. “We teach our children everything,” she says, “so that they don’t forget how important Babasaheb is for us and for India.”

Dhondubhau Shinde’s poem on Babasaheb Ambedkar takes us through his birth on April 14, 1891, in Mhow (a town and military cantonment in the Central Province, now in Madhya Pradesh), the moments of joy for his father Ramji Ambedkar, mother Bhimabai and her sister-in-law Miratai, and the playing of the bugle and the blow-horn to celebrate his birth.

Telegrams are sent to people in cities and villages to convey the news. In this poem, Bhimrao’s father Ramji dreams of his 14th child doing great work for the country – as the architect of India’s Constitution and also a Bharat Ratna (the highest civilian award). The newborn Bhim is likened to a light from the ‘diamond mine’ of Ambadawe – the native village of the Sakpal family.

(The family’s original name was Sakpal. Bhimrao’s father changed that to Ambadawekar after their village Ambadawe in Ratnagiri district. While in school, the young Bhim’s teacher Krishna Keshav Ambedkar registered him under his own surname – Ambedkar.)

The poet calls the Sanatani, referring to the caste-driven Hindu society, the enemy of the Bahujan communities – the underprivileged or ‘backward’ castes within this hierarchy, oppressed for centuries by the upper castes. He says that Bhimrao’s rising to unite their communities against such treatment will strike fear in the heart of the oppressors and they would be overwhelmed by him. This alludes to the achievements of Dr. Ambedkar, including a place at the table of political leaders in the country’s capital. In the last line of the poem, Dhondubhau Shinde bows his head three times to Babasaheb Ambedkar.

The song brings to life the joys and aspirations of Ramji and Bhimabai Ambedkar, and the celebrations during the first 12 days of newborn Bhim's life

Watch video: ‘Bhimai has given birth to a diamond’

Here's Dhondubhau's untitled poem, sung by the women of Nandgaon:

In 1891, on 14 April, in the month of Chaitra
Mhow village was filled with joy
Sleep baby sleep…

On the tenth day, in ten directions
There was a broadcast in the skies
A radiance shone all over India
Sleep baby sleep…

On the eleventh day, came the affirmation
A blow will strike at the root of slavery
Showing panic in the Sanatani community
Ramji’s dream was taking shape
Sleep baby sleep…