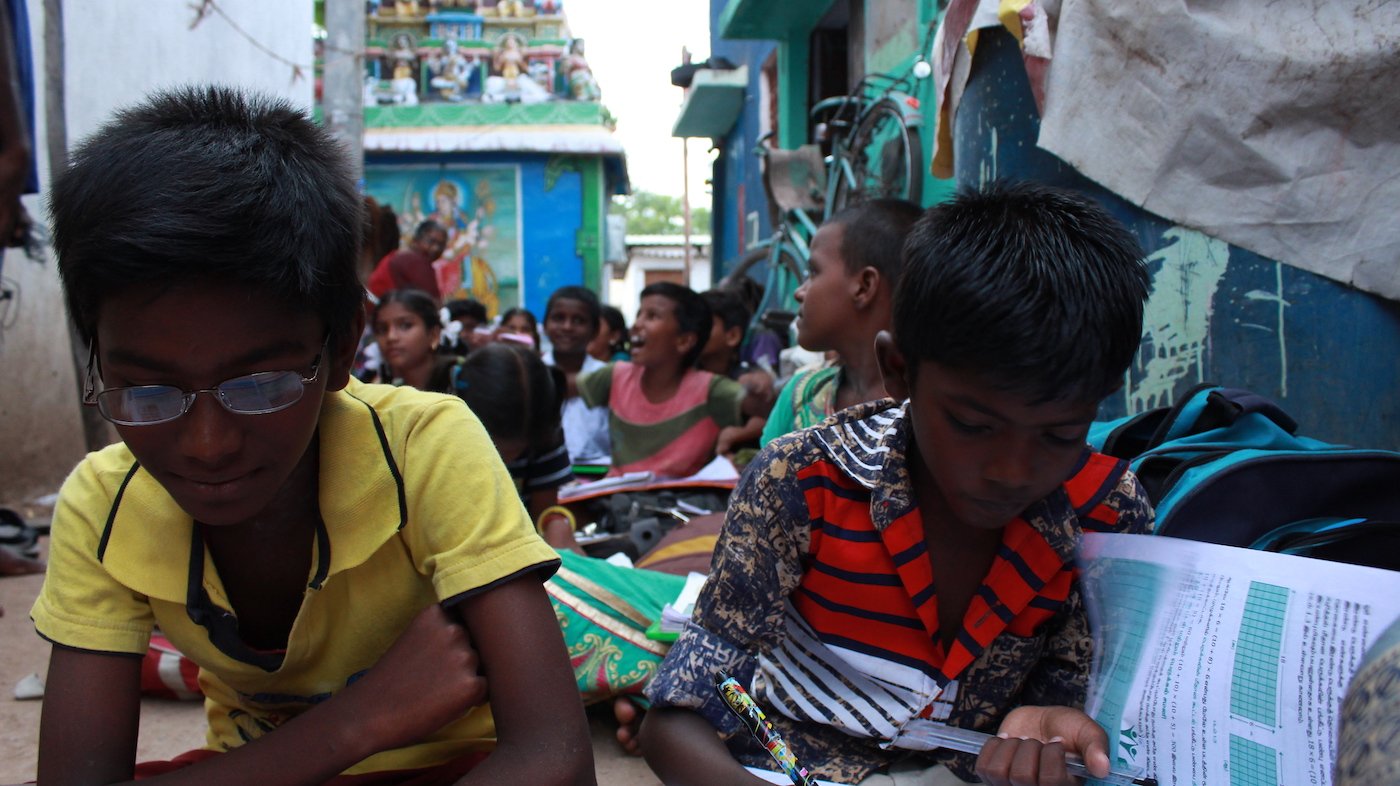 In a slum colony in Madurai, a teacher juggles three jobs to still make time to run a tuition centre for the children of manual scavengers and others – exhorting them never to think of doing their parents’ job

She fights for her community – but often against their beliefs. She battles for their dignity, but against their daily jobs. Those jobs, she wants to destroy. She thinks she may have alienated the older generation of her people,  so focuses on the younger one. She is Kalpana*, just 33, but running a free tuition centre for children in Gomaspalayam. That is perhaps the oldest slum in Madurai in Tamil Nadu – with nearly 700 families crammed into 230 houses – right at the centre of a city more famous for its tourism destinations.

These are families of manual scavengers, sanitation workers (street cleaners) or domestic labourers and caretakers. All of them are Arundhathiyars, a group on the lowest rung of the Dalit social ladder. Many, particularly the elderly here, think it is hard to get rid of ‘scavenging’ from their lives. “Somehow, my people think it is difficult to change,” she says. “They hate it when I campaign about it. They do not want to rub anyone on the wrong side.”

So Kalpana tries to sow different ideas in younger minds. She runs a tuition centre – on her own resources – for 40 students, five days a week. Occasionally, it has classes on Saturdays, too. The centre is located at the community hall in Gomaspalayam and functions from 5.30 p.m. to 8.30 p.m. Here, she constantly exhorts the students never to “think of doing their parents’ job” and helps them with their studies. “I have been doing this for three years,” she says, “and will continue to do it as long as I am around.” It was three years ago that concrete houses were first constructed for the inhabitants of the 50-year-old slum. “Since this so-called renovation, I have been using this community hall [that came up at that time] to teach the kids.” 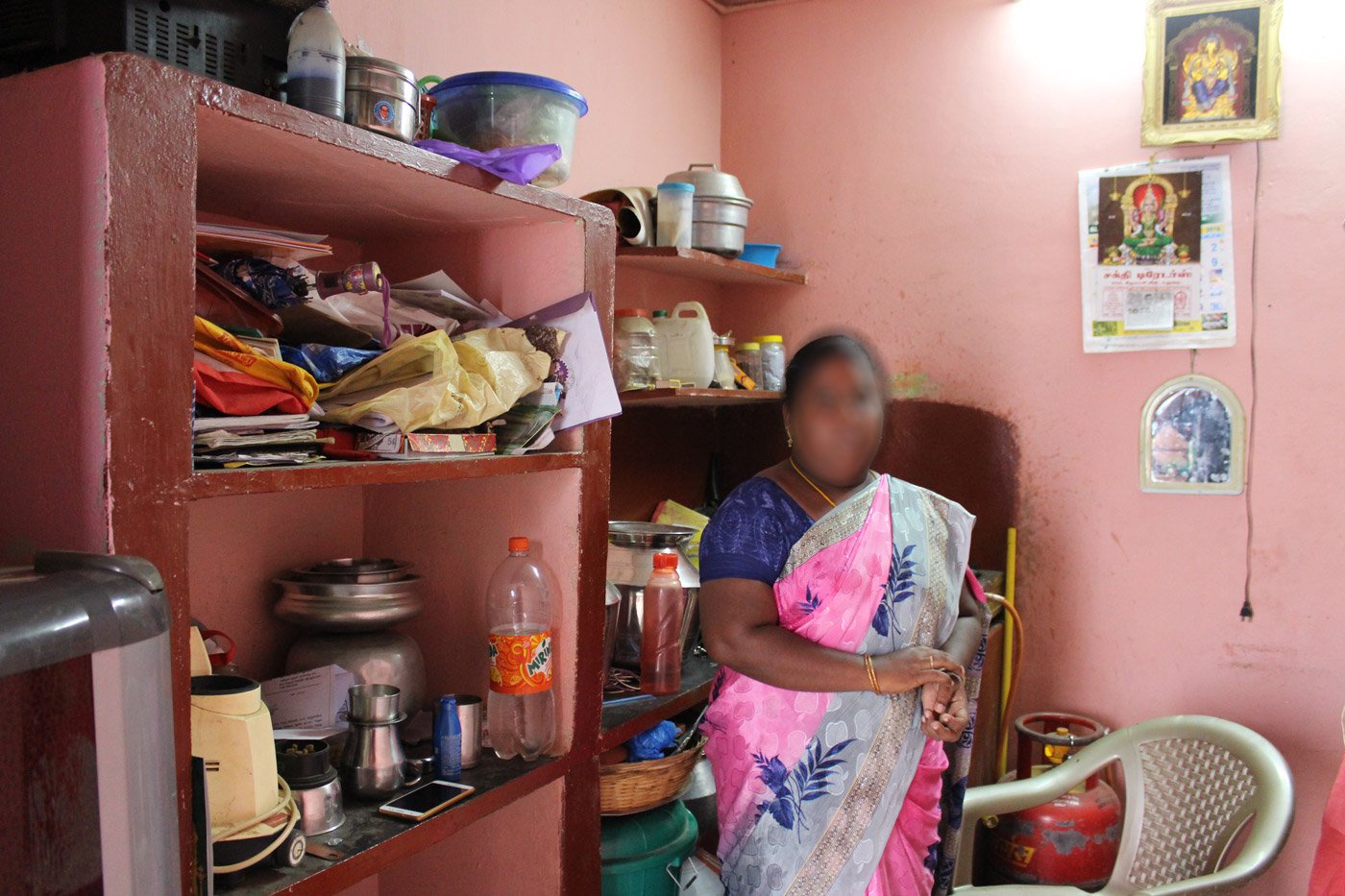 Many here think it is hard to give up sanitation work, says Kalpana, who crossed the boundary and is helping others do the same

This, even as her mother continues to clean streets day in, day out. “My father died when I was very young. If I tell my mother not to do this job anymore, she gets upset. She thinks it is only because of this job that our family could survive. She doesn’t understand that it is inherently humiliating. That we are doing this only because we are born into a particular caste.”

Kalpana’s tuition centre comes in handy for students like 14-year-old Kausalya, who finds it difficult to keep up with homework in her crowded and cramped home. “Ever since I began attending the classes there, I have been making it to the first 10 ranks in school,” says Kausalya, whose father Ramesh is a sweeper in Madurai. “I study hard because otherwise I will, like my father, end up earning only Rs. 6,000 after staking your dignity. I respect my father, he gives me everything. But I want him to come out of this vicious circle.”

Kalpana often spends from her own pocket to pursue her mission. She earns Rs. 250 per day working as a community organiser in the women's section of the Madurai Municipal Corporation office. “It is not a regular job, so I also teach women tailoring at the Loyola Institute for Rs. 3,000 per month.” 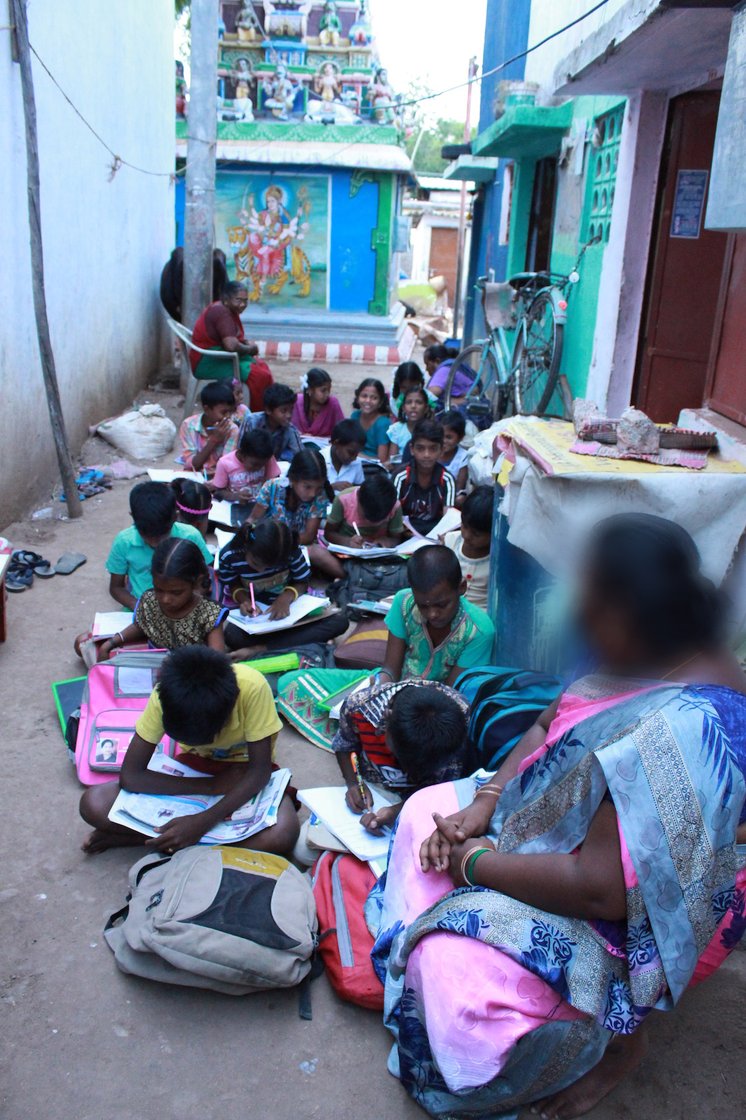 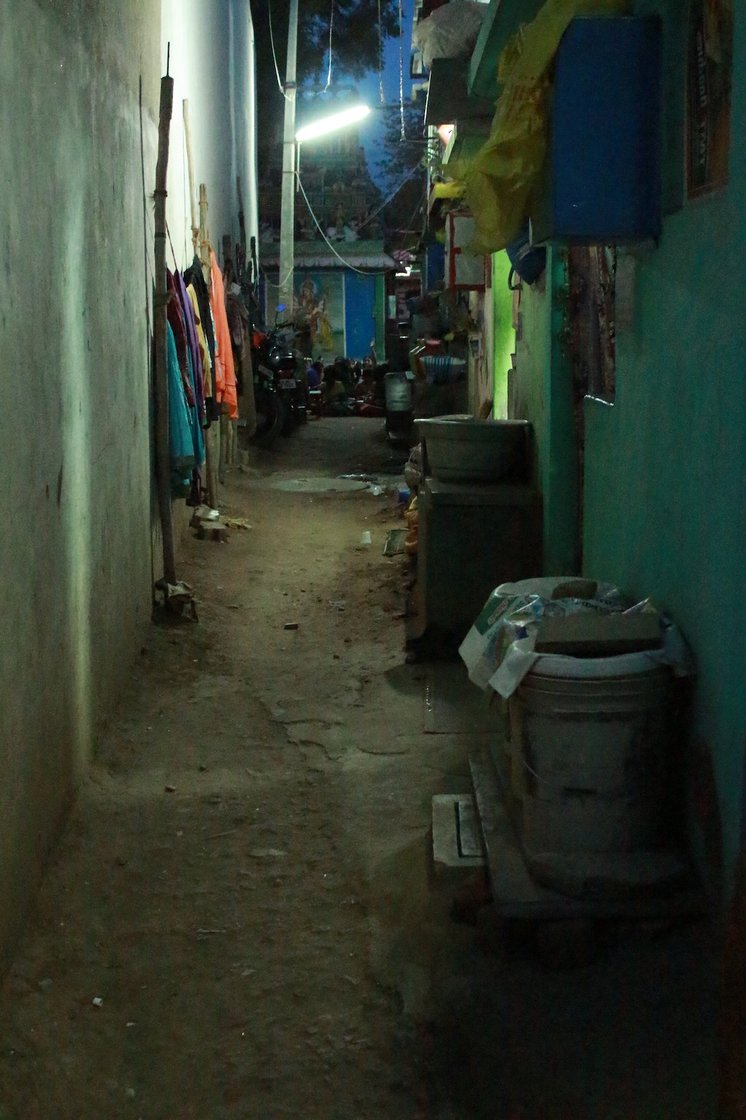 'She teaches us so many things that will help us face life better', says a 15-year-old student, whose grades have improved after attending Kalpana's classes (left) in the Gomaspalayam colony (right)

Besides these jobs, Kalpana also works as a helper in a school van picking up and dropping government school students in the mornings and evenings, earning an additional Rs. 3,000 per month. Of this, she spends Rs. 500 once every two months to pay the electricity bill of the community hall. “The director of the institute I work for gives me Rs. 1,000 every month. I add some money to it and buy activity materials for the children. Sometimes, I take them on trips. Their parents pay for the bus fare. I take care of other expenses – food, toys, entry tickets to a park or the zoo, and so on.”

That perhaps explains why the 40 children in her tuition centre keep coming back for more. “Someday, I will become a teacher like Kalpana akka [elder sister]” says 15-year-old Akshayasree, whose father Alagiri is a cleaner at a hotel in Madurai. “She teaches us from textbooks, but does not stop with that. She teaches us so many things that will help us face life better. I have always scored first or second rank at my school since I started coming to the tuition centre.”

Guna Vincent, founder executive of Mahalir Sakthi (Women Power) – a Madurai-based non-governmental organisation that helped Kalpana to step out of the occupation her community is trapped in – says the idea is to “liberate more Kalpanas from cheris [slums] and caste. Many people do not want to step out of the boundaries that their community or society has set for them. Kalpana dared to do that. Yet, she does not stop with that. She wants many more to cross those boundaries.”

Someday, Kalpana hopes, at least one of those children will stand up and say no when handed a broom or a bucket.

Kalpana's real name has not been used, and her photograph has been blurred, on her request.

Krithika Srinivasan is a Chennai-based freelance journalist with a master’s degree in sociology. She is a trained shadow puppeteer.

Other stories by Krithika Srinivasan