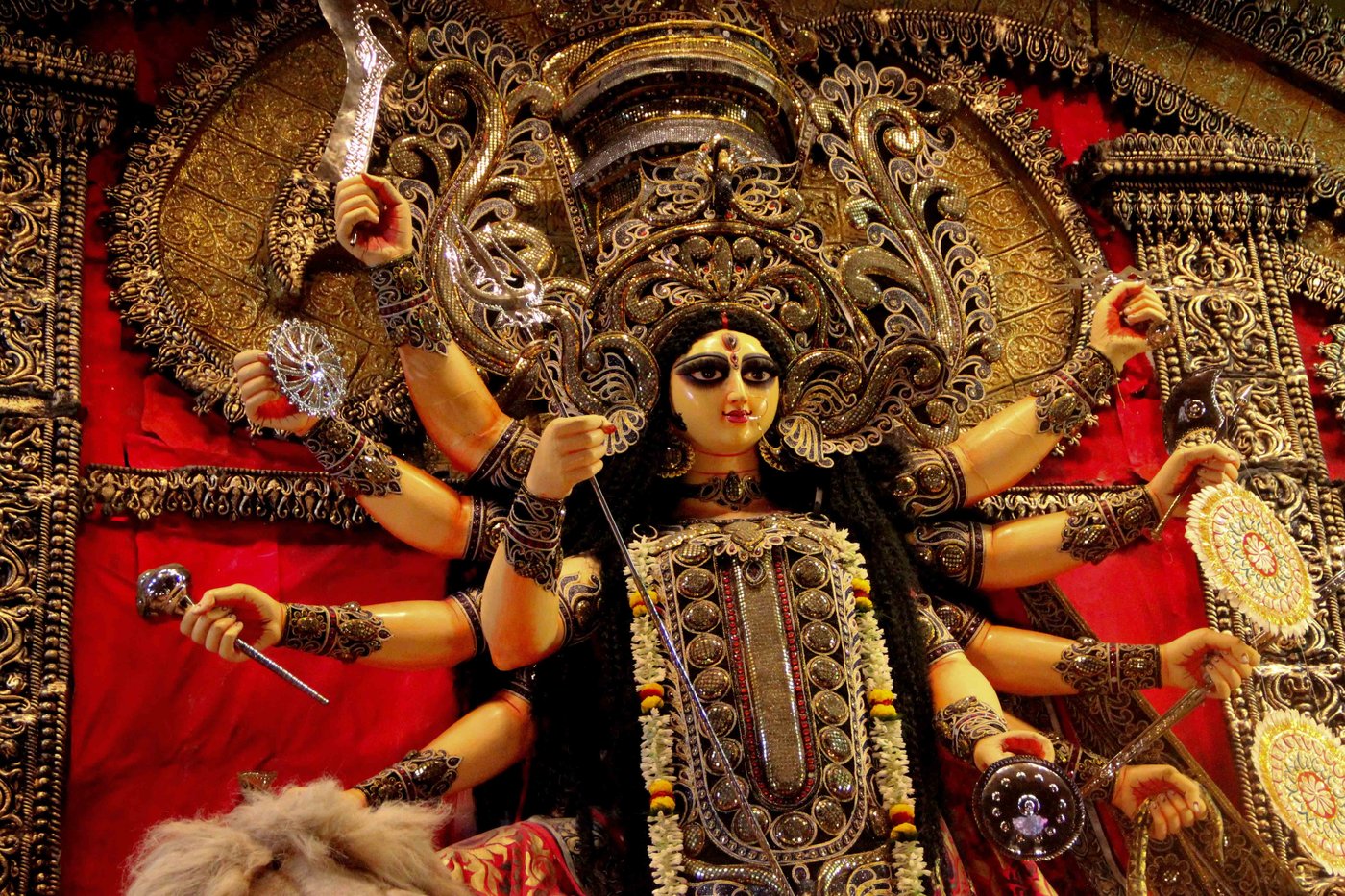 At the centuries-old potters' colony in Kolkata, artisans work through the night on the clay idols that they will soon send out to the city for Durga Puja

In the narrow lanes of Kumartuli in north Kolkata, barely wide enough for a hand-pulled rickshaw to pass though, the only people you will usually meet are the Kumars – the idol-makers of the city. It is from here that idols of Goddess Durga and other deities make their way into Kolkata every year. 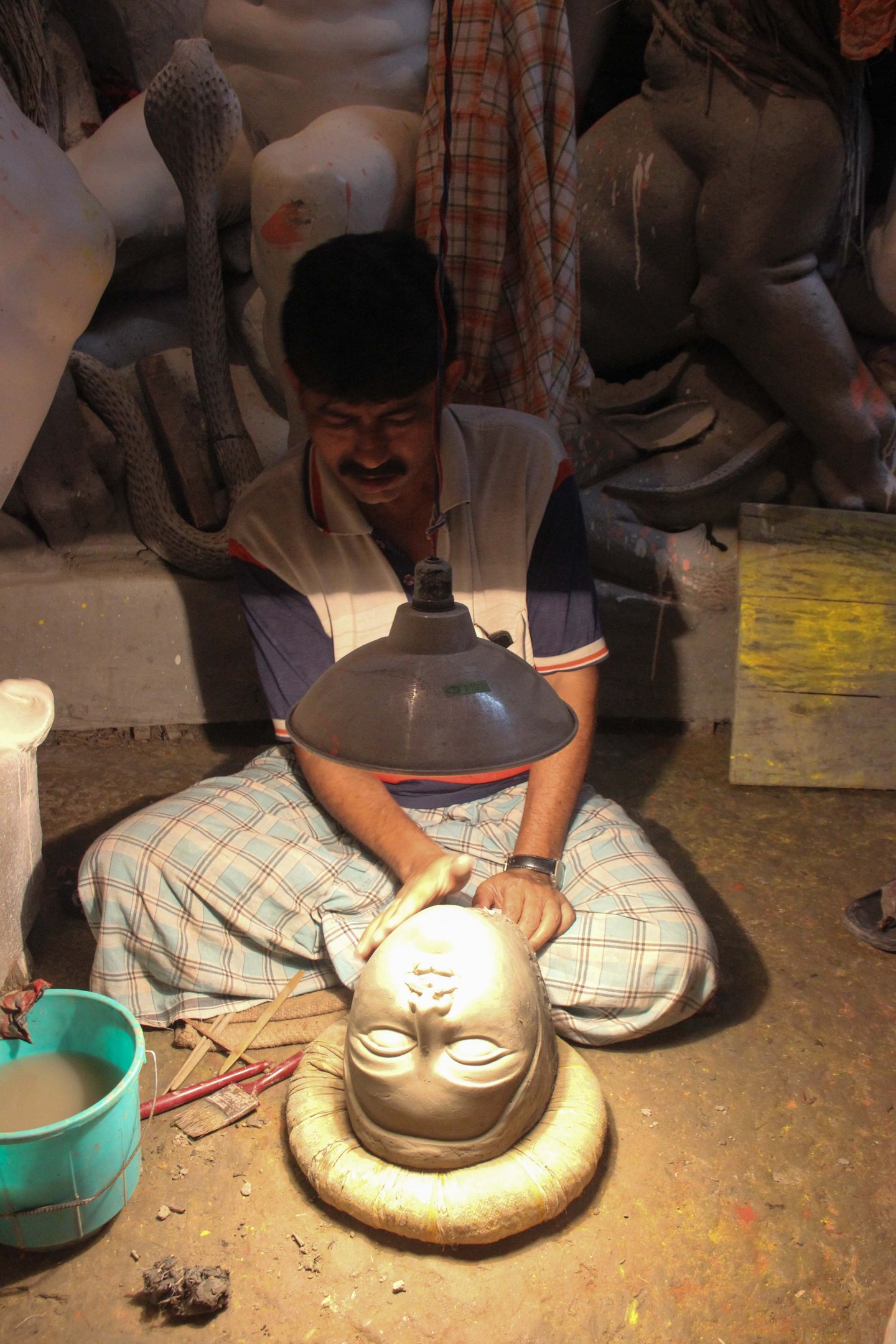 Karthik Paul at his workshop in Kumartuli

Karthik Paul has a workshop here, a shed really of bamboo and plastic sheets, called 'Brajeshwar and Sons' (named after his father). He tells us about the long and layered process of making an idol. Various mixes of soil like Gangamati (mud from the banks of the river) and path mati (a mixture of jute particles and Ganga mati ) are used during the different stages of making an idol. 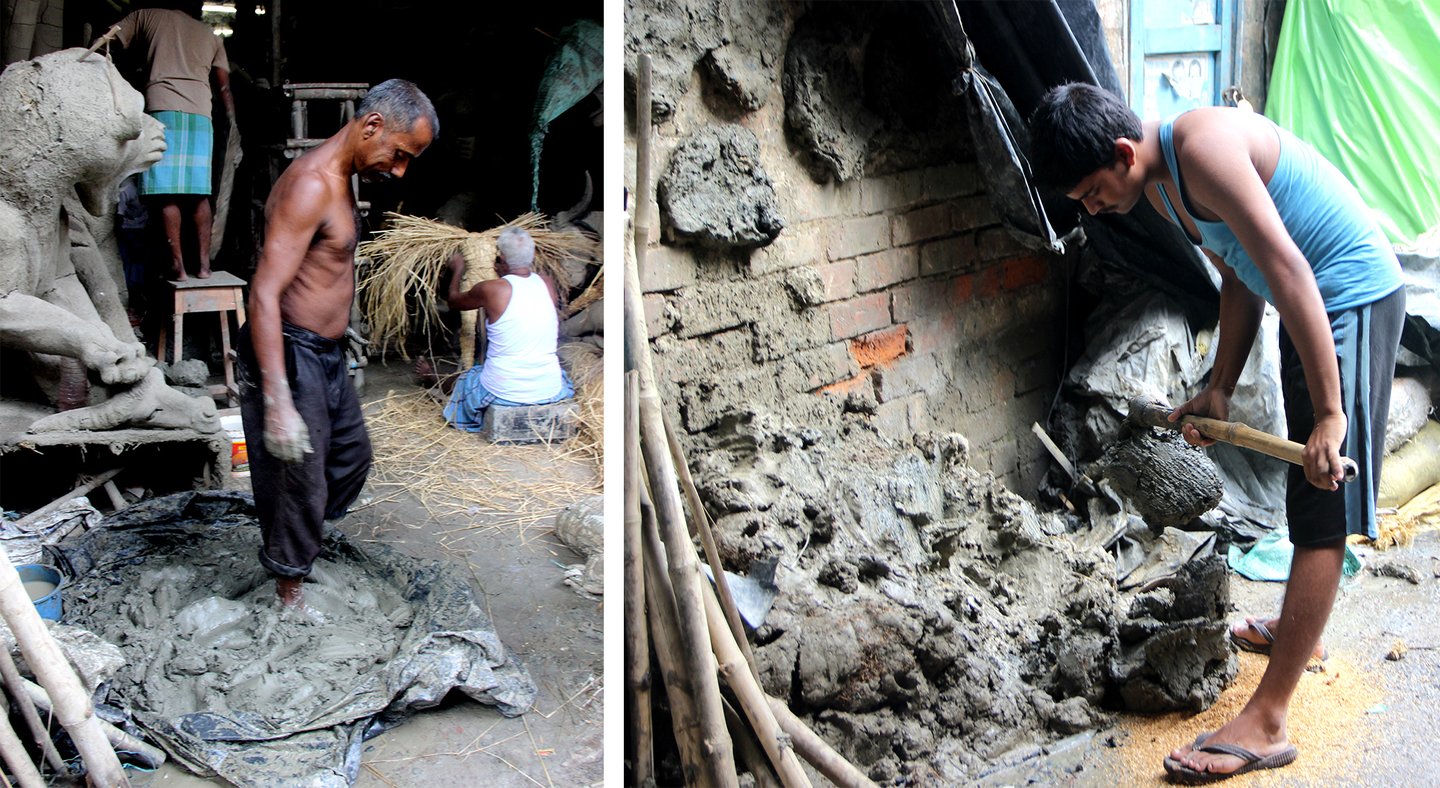 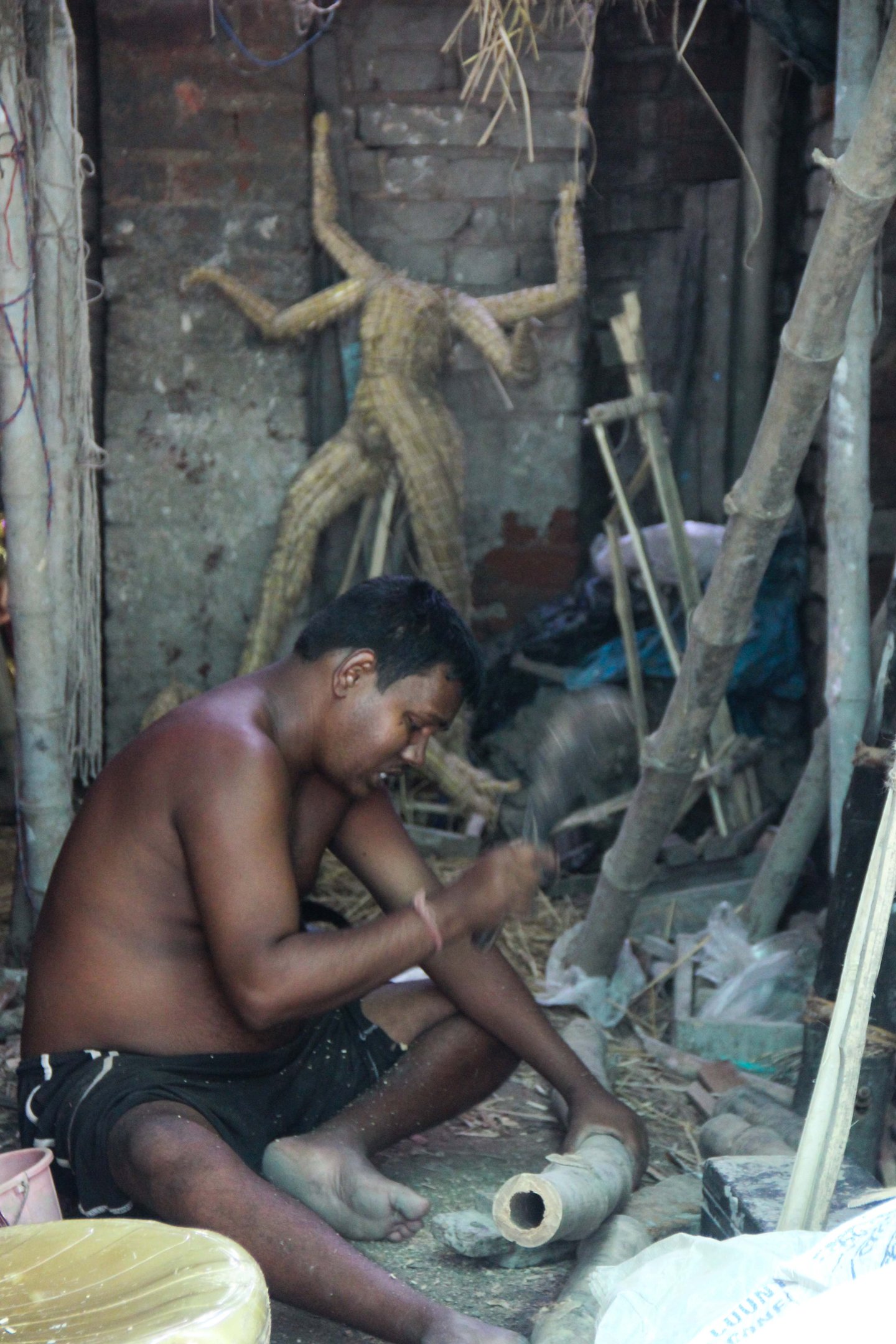 The process of making an idol starts with the 'kathamo' , a bamboo structure to support the idol 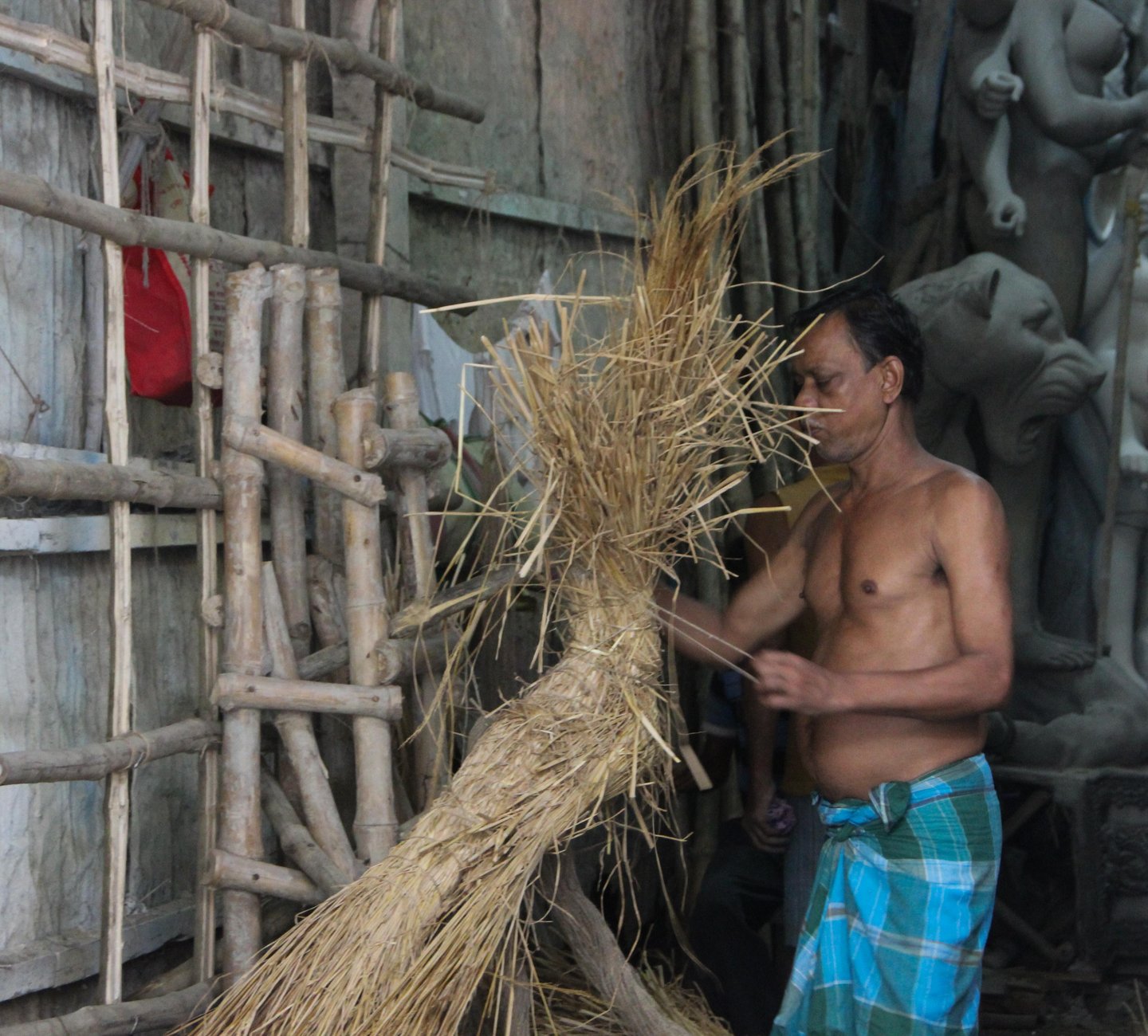 Once the bamboo structure is ready, straw is methodically bound together to give shape to an idol; the raw materials for this come from the nearby Bagbazar market 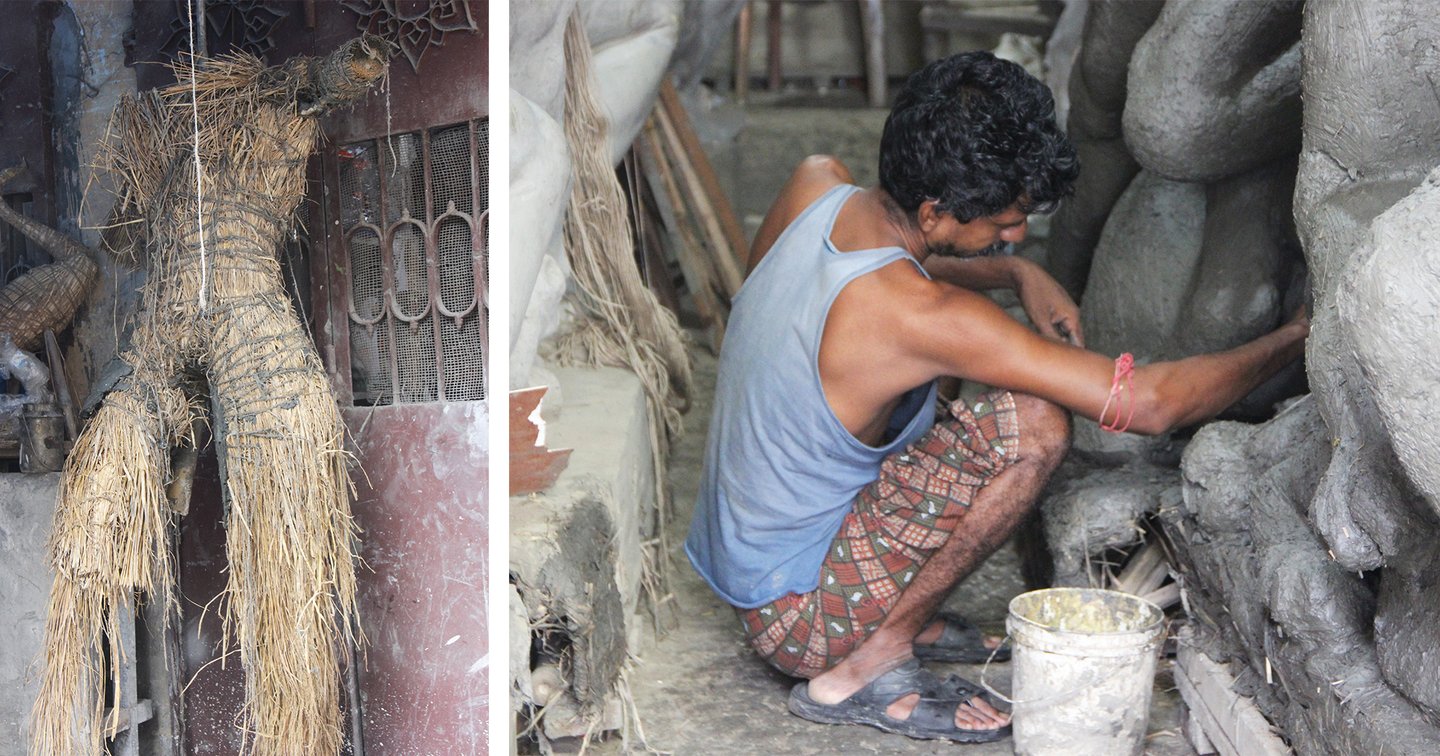 An artisan applies sticky black clay on the straw structure to give the idol its final shape; the clay structure is then put out in the sun to dry for 3 to 4 days

As we talk, Paul is moulding the face of Lord Kartik with wet clay and detailing it with his expert hands. He uses a paint brush and chiyari, a hand-polished sculpting tool made from bamboo. 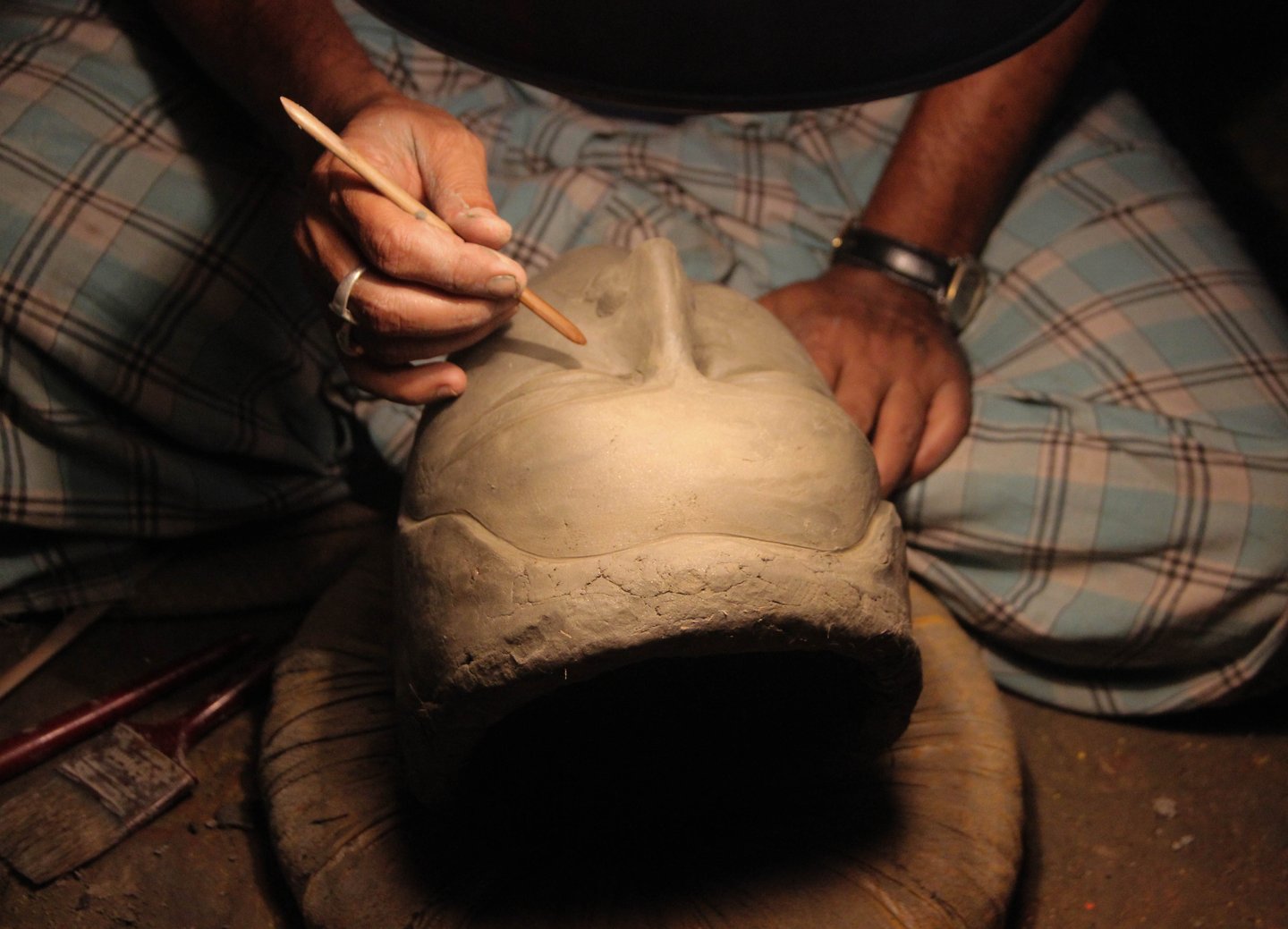 At another workshop nearby, Gopal Paul has prepared a glue to stick a fine towel-like material onto the clay structure, to give it a skin-textured finish. Gopal is from Krishnanagar of Nadia district, around 120 kilometres north of Kolkata. Many of the workers here – all men – are from the same district; most of them stay in quarters in the same area provided by the workshop owners . The workers are hired months before the peak season. They work in eight-hour shifts, but just before the autumn festival these artisans work through the night and get paid for the overtime. 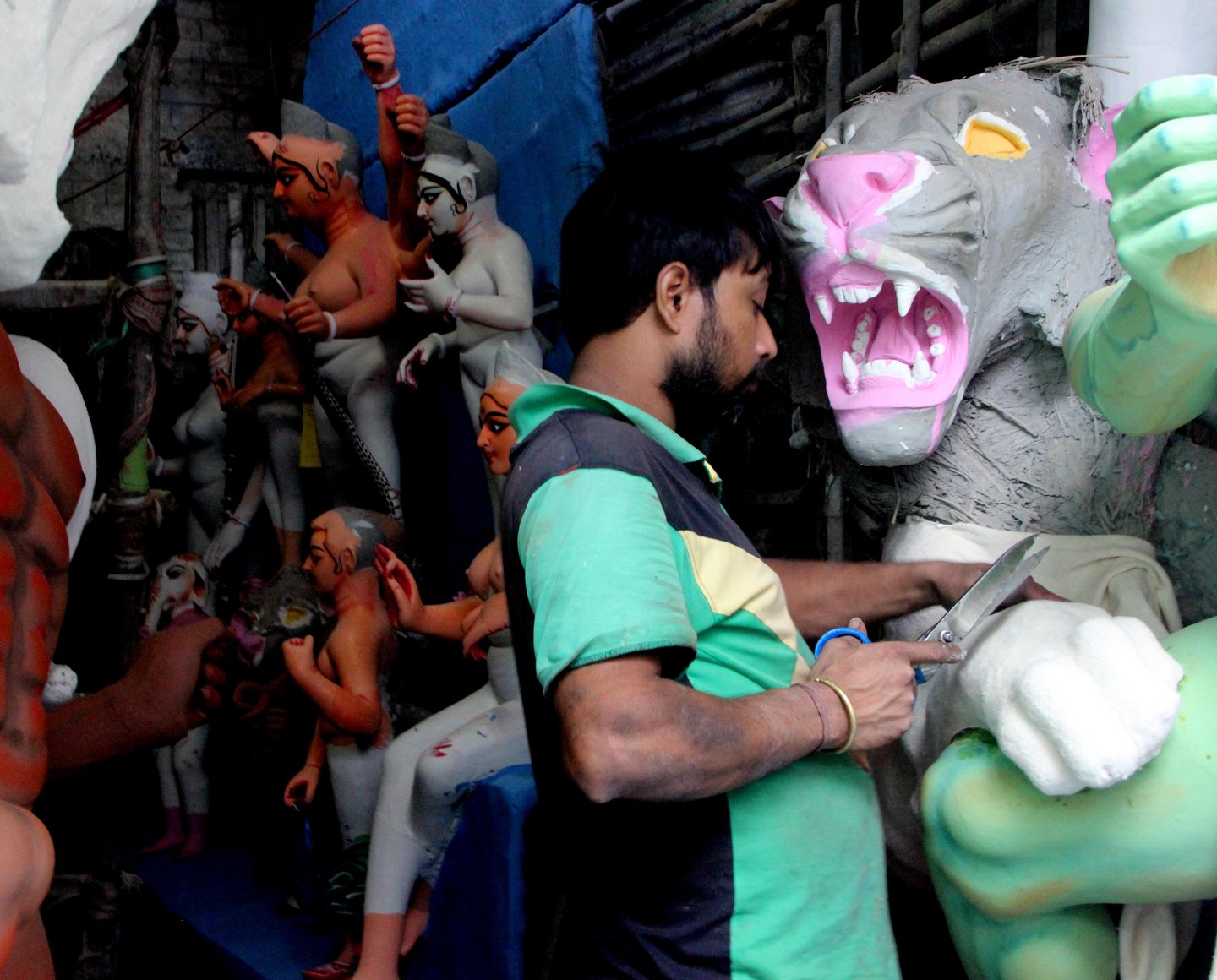 At another workshop nearby, Gopal Paul uses a fine towel-like material to give idols a skin-textured look

The first potters in Kumartuli migrated from Krishnanagar some 300 years ago. They stayed in the then newly-forming Kumartuli for a few months, close to Bagbazar ghat , so that clay from the river could be procured easily. And they worked in the homes of zamindars, making the idols at the thakurdalans (demarcated areas for religious festivals inside the zamindars ’ residential premises) for weeks before the Durga Puja festival.

Before and during the partition of Bengal in 1905, highly skilled artisans from Bangladesh – from Dhaka, Birkampur, Faridpur – made their way to Kumartuli. With the decline of the zamindari system after India’s Independence, thesarbojonin or community puja became popular. This is when Maa Durga shifted out of the cramped thakurdalans to the wide pandals on the roads, with elaborate and separate backdrops for the goddess and other idols. 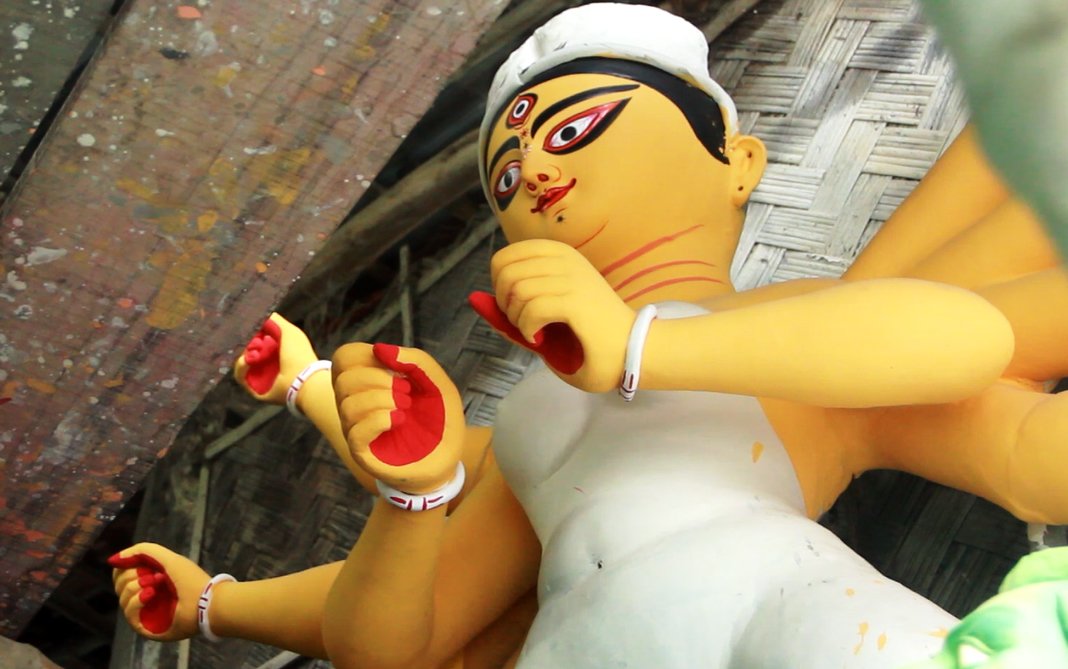 With the painting of Maa Durga’s eyes on the auspicious day of Mahalaya, the clay idols are finally brought to life

Durga Puja is the biggest festival in West Bengal. It starts with Mahalaya, usually in late September- early October. On this day, thousands offer prayers to their ancestors at the banks of the Ganga (locally, the Hooghly) in a ritual called tarpan . The inauguration of the idol takes place on the days of Choturthi, Panchami or Shasthi. The main puja goes on for three days – Maha-saptami, Maha-astami, Maha-nabami. The puja rituals are long and detailed. After the three days, on Dashami (the last day), many in Kolkata offer an emotional farewell to the goddess by immersing the idols at Babughat and other spots on the Hooghly.

At his workshop in Kumartuli, still giving the finishing touches to an idol, Karthik tells us that he and his workers make the colours themselves. They mix khori mati (a special clay prepared from sea froth) with colouring chemicals and a glue prepared from khai-bichi or tamarind seeds. Tamarind seed powder helps to keep the colour on clay models for a longer period of time.

After a while, the idols are ready, all decked up to start their outward journeys into the city. The dimly-lit studios of Kumartuli will soon say goodbye to their works of art, which will find newer homes in the brightly-illuminatedpandals in Kolkata.