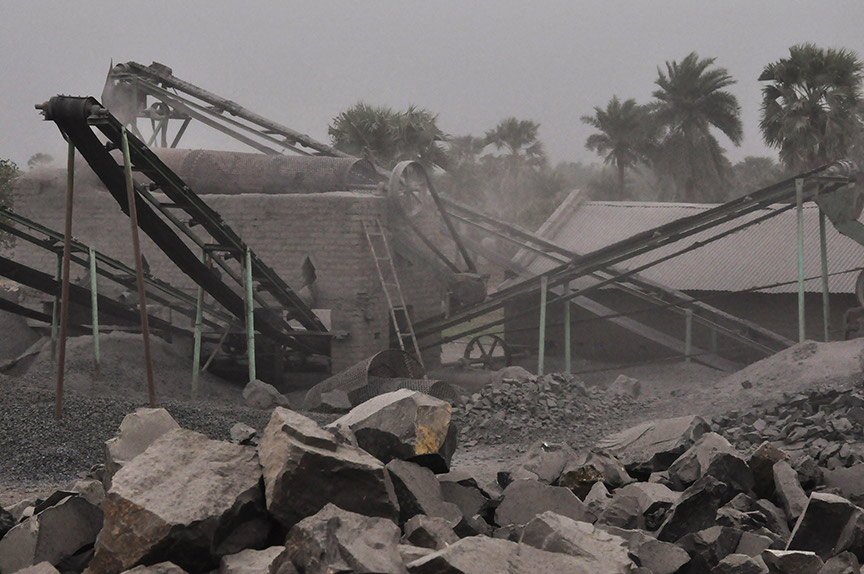 In Birbhum district of West Bengal can be found the eastern edge of the Rajmahal Hills, which are flat-topped outcrops at most 500 metres in height, created by ancient flows of lava over the flat, fertile plains. The hills consist of volcanic rocks such as basalt. In the distant past, the region was home to elephants, tigers, bears, leopards, deer and a variety of other creatures. It also had, and still has, many villages of Santals, mainly in the rocky upland areas.

Borudi Pahar is one of these basalt hills rising up from the plains, in Birbhum's Nalhati block. The rock is used for road-building, for strewing between railway sleepers, and, crushed into finer grades, as a construction material for buildings. Until about 30 years ago, the hill's flat top was either forested or occupied by fields cultivated by Santals. Since then, however, the hill has been quarried for the rock, which is in high demand because of India's road-building and construction boom. Once blasted out by dynamite, the rock is broken into rubble at nearby crushers and then transported out of the region.

This tour will take us from Bhabanandapur village, at the base of the hill, up to the top of Borudi Pahar, as witnessed on an overcast day in April 2015.

The labourers are mostly Santals – men, women, and teenagers – from villages that have had their fields destroyed by the industry. Most are local, but many also come from Jharkhand, which is just a few kilometres away and is also ravaged by mining, so that their agricultural livelihoods are all but eradicated. Whatever protective gear they wear is makeshift. The owners provide no boots, helmets, masks, toilet facilities, drinking water, medical care or compensation for accidents.

According to social worker Ghasiram Hembrom, in June 2014 a Santal woman from Bhabanandapur village was passing along this road when she was caught in broad daylight by a crusher manager and raped for three hours. She was too frightened to press charges.

After this point on the road, the vehicle passed some quarry offices, where it was not advisable to take pictures. The region is controlled by a stone quarry "mafia" that could deal violently with outsiders with cameras. So the next picture is taken from the first village on top of Borudi, named Chandannagar, looking back toward Bhabanandapur. 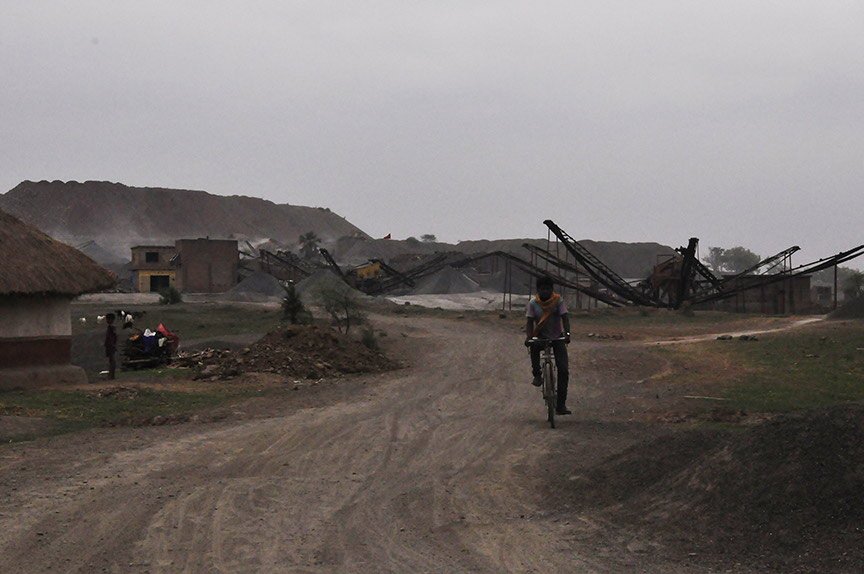 The road from Bhabanandapur to Borudi Pahar, which can be seen rising to the left in this photograph. Eventually the road curves around to the right, passes through a region of crushers, and ascends the hill 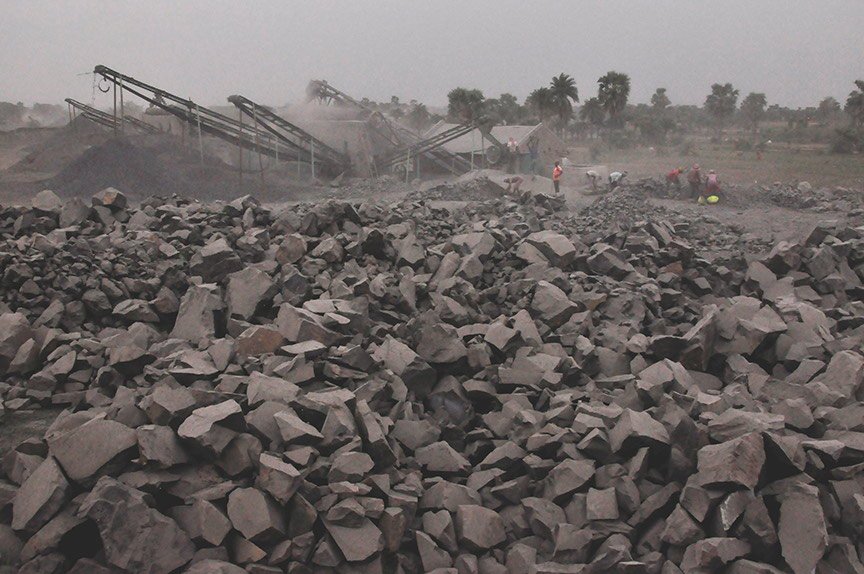 View back toward Bhabanandapur, from the right of the road to Borudi Pahar. The rocks in the foreground have been quarried on Borudi and dumped here, awaiting crushing into stone chips 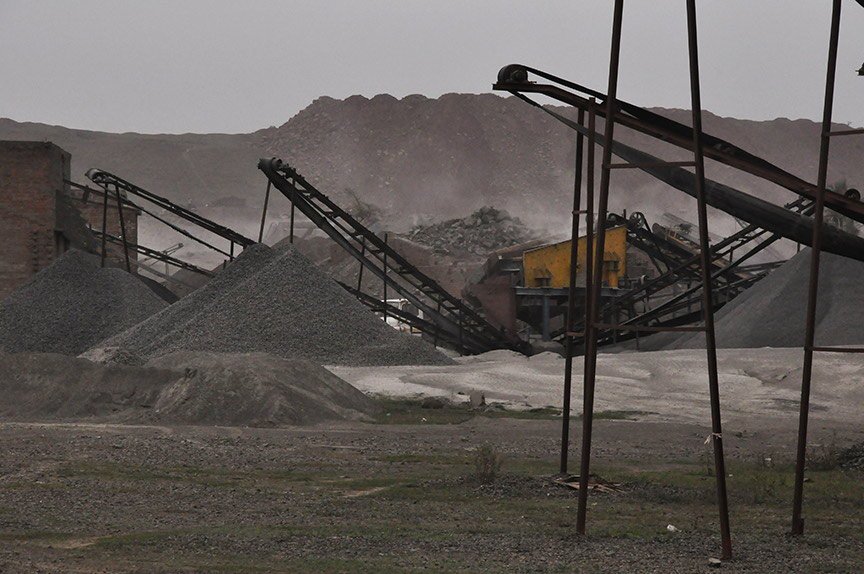 The view from the left side of road (above) shows Borudi to be covered by overburden – earth that was excavated from within it and has been dumped wherever possible, so that the hill looks like a pile of rubble 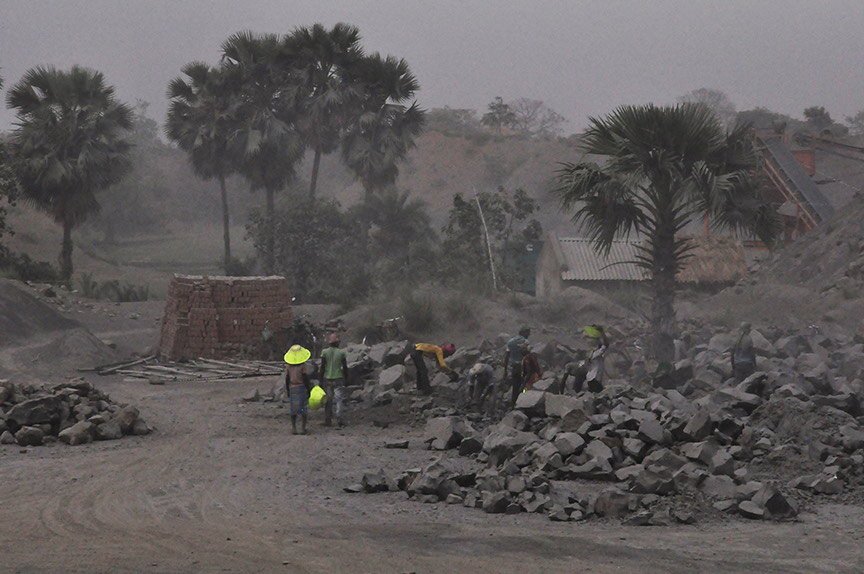 The crusher (in the cover image), has conveyor belts that carry the rocks to a central piston, which breaks them. Labourers have to pile the rocks onto the belts; they can and do get caught in the belts and are crushed themselves 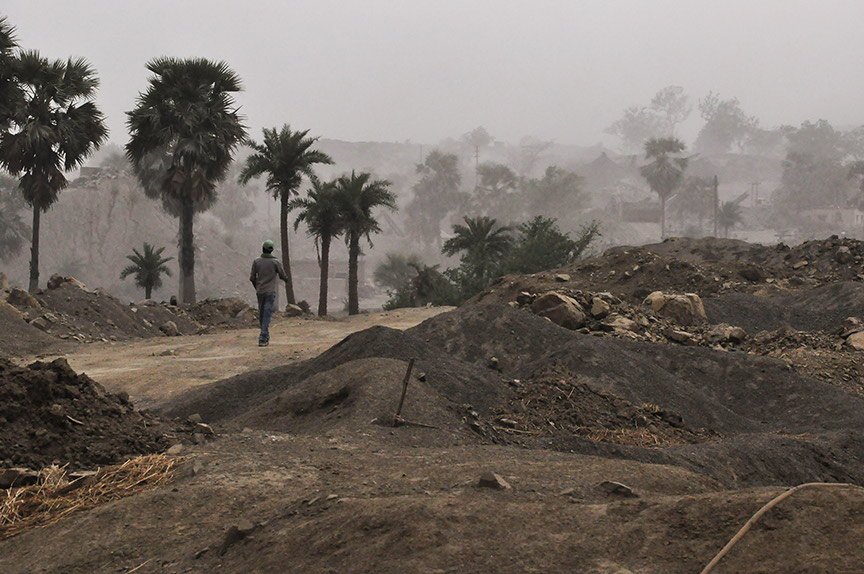 Just off the above picture, to the right, are the steep walls of a quarry. The dust in the distance is rising from the crushers we have just seen 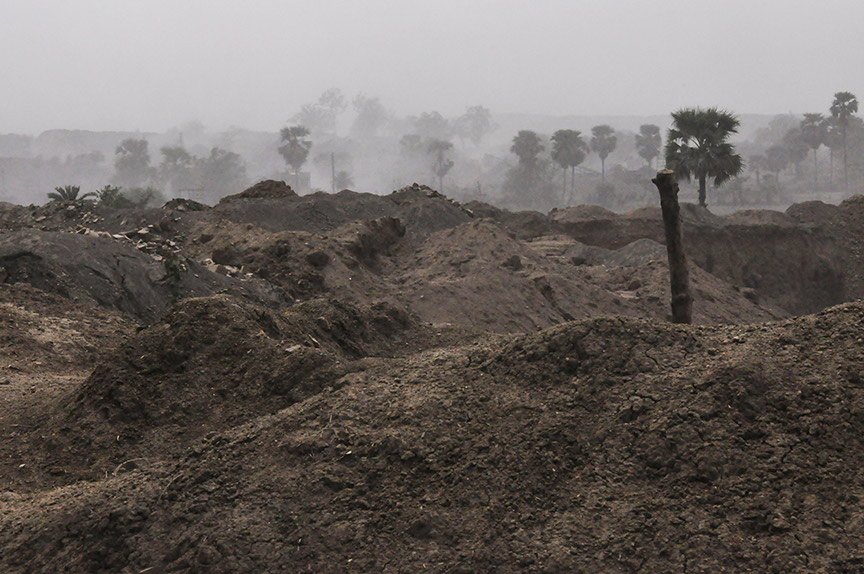 The piles of rock and earth are overburden, dumped wherever possible. These used to be fields. It had rained the night before, so the dust is less than normal 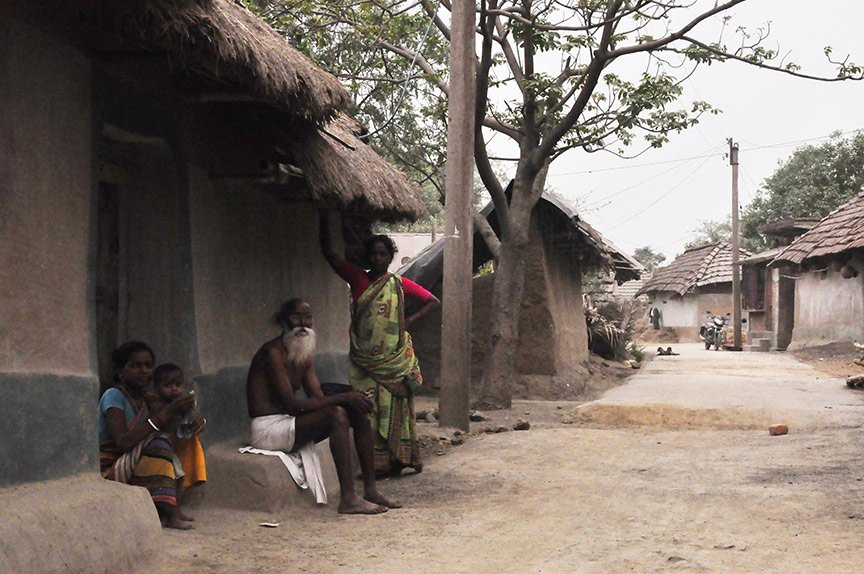 Chandannagar village is an island, hemmed in by a quarry separated from the village only by the road – which lies behind me as I take this picture – and crushers on all other sides. As many as 66 families live here. The village has six 'TB' patients, because doctors in this region invariably diagnose silicosis as tuberculosis. Kala azar and jaundice are also common. Astonishingly, I hear a coppersmith calling, the bird having taken shelter on one of the few patches of "green" left on the mountain 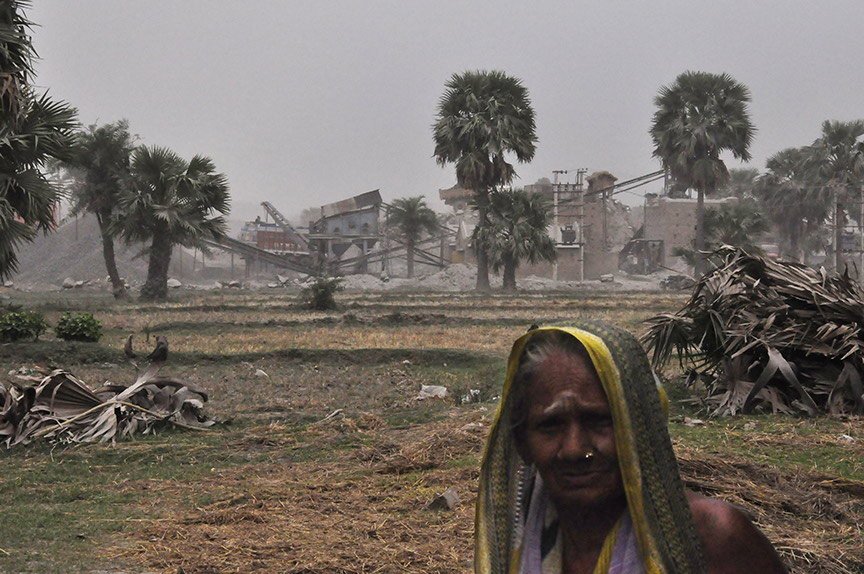 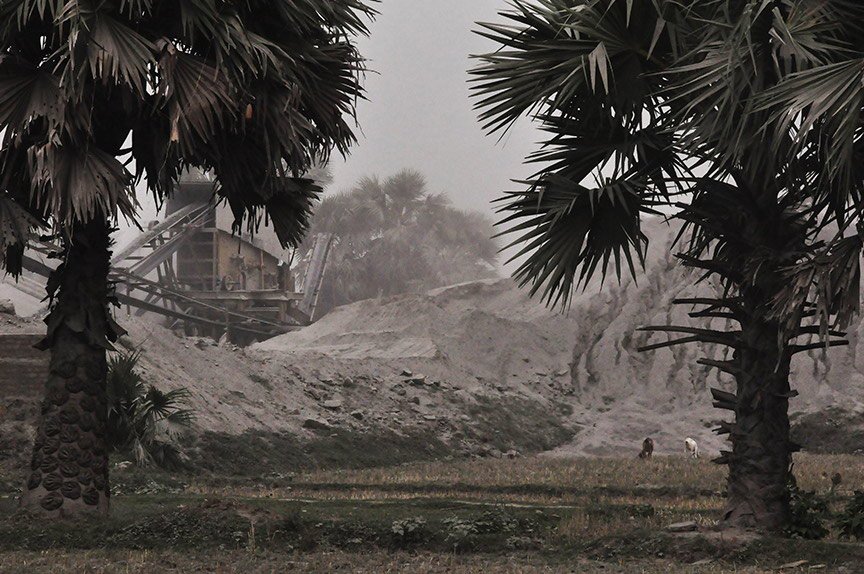 View from Chandannagar's sacred grove, where religious ceremonies used to be performed. The primary school is to the left of this picture, also nestled up against the crushers. The din is continuous and deafening. The finely-crushed rock seen in the piles in this picture is mixed with cement to make a strong construction material. As a result, real estate developers also have a deep interest in this industry 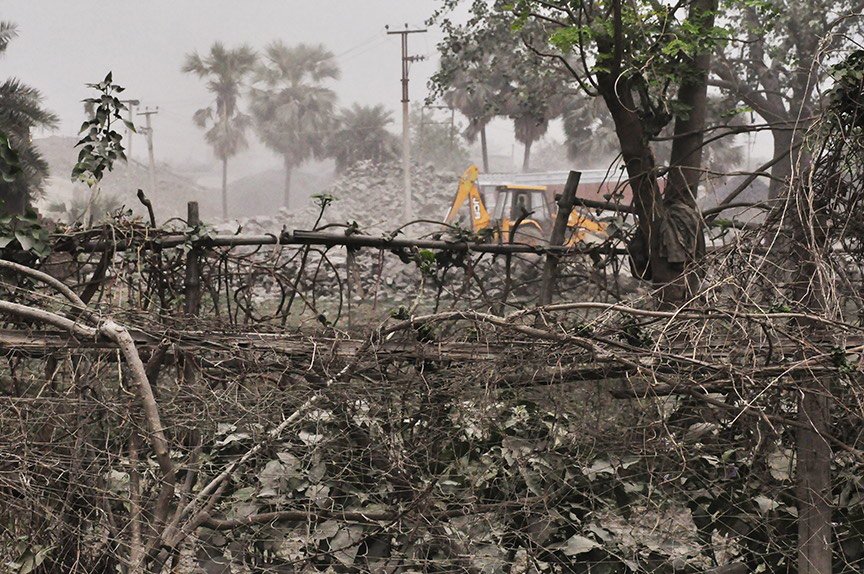 Vegetable plot in Chandannagar. The plants within the fenced plot seem to be brinjal 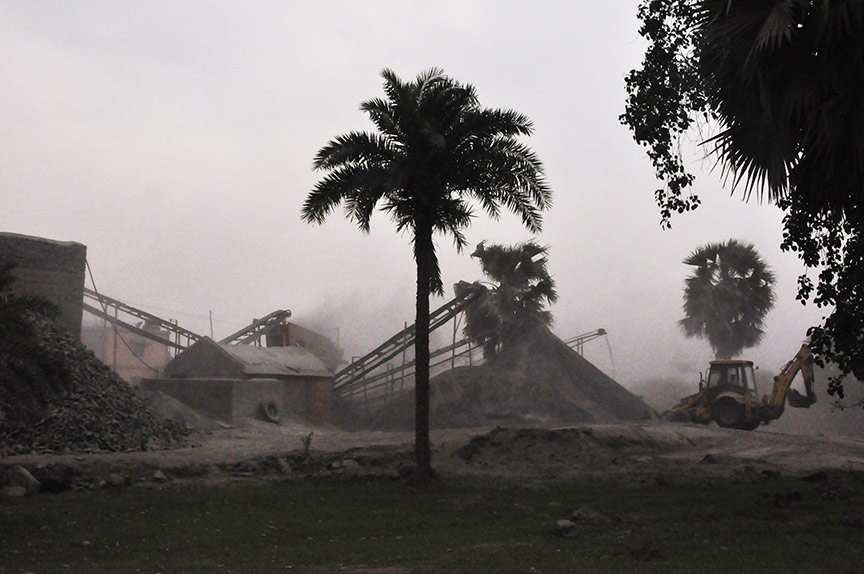 The village also has some fields on the other side. These lie across the road along which we travelled, and past some 50 metres of overburden. This is the view from the fields. Needless to say, only the hardiest grass survives here. The dust is lethal to almost all life forms, and where it is most dense, nothing at all can live for long 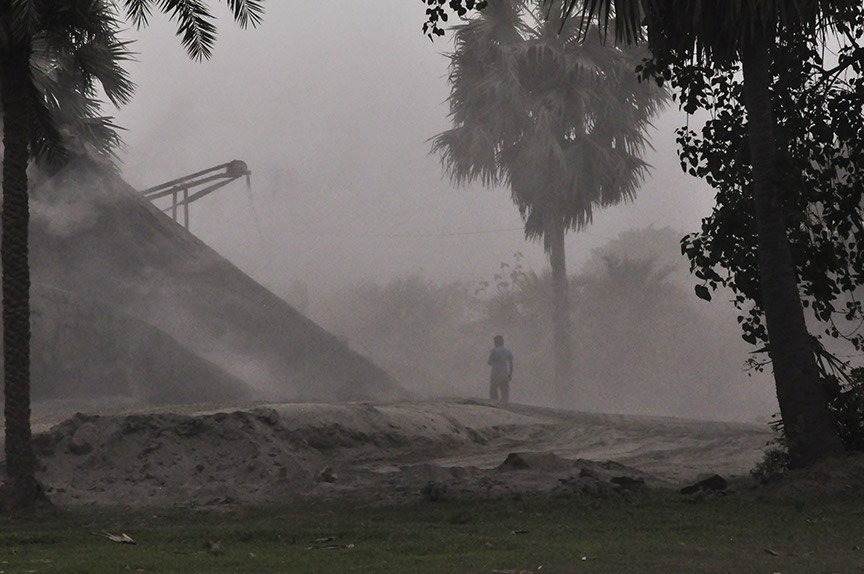 View from the edge of the field. I did not dare to step out of the field, for fear of the dust, but even so I was soon coughing 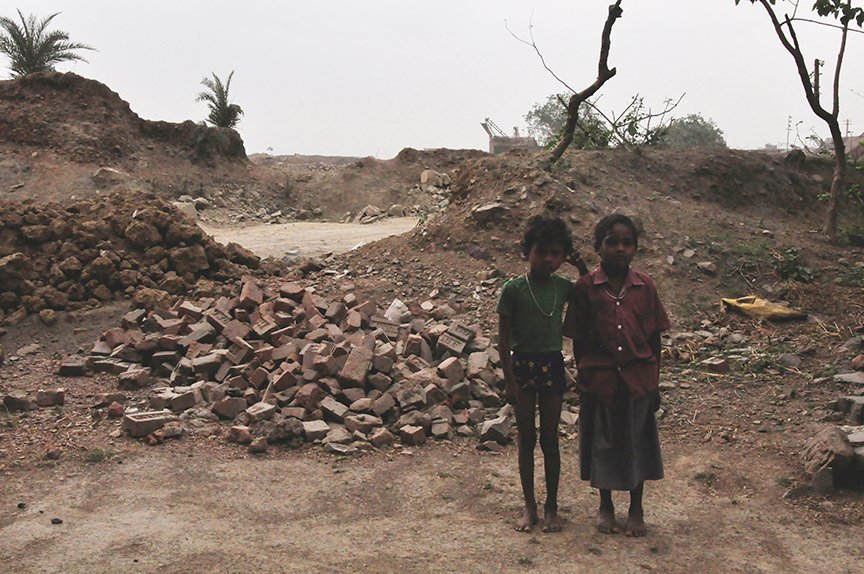 The children are standing on the road side in Chandannagar. Behind the overburden that is choking the two young palms in the background, lies a quarry. On the road between the quarry and the village, seen through a gap in the rock piles, rock-laden trucks pass by all day 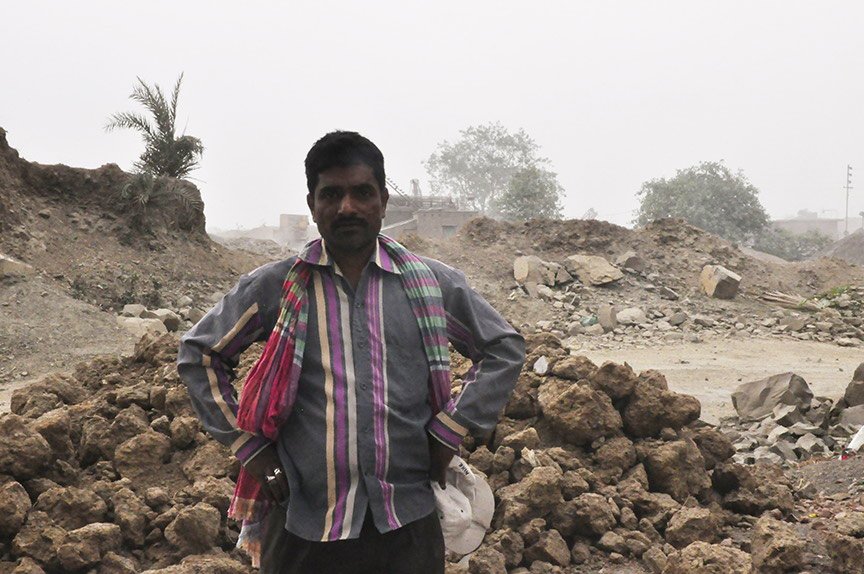 Paran Maddi stands in front of what used to be his family's fields, all 100 bigha (roughly 33 acres) of them. The mafia simply started digging there, and when his brother complained, they said to his father, "Which do you want, your land or your son? We'll give you one." The family received nocompensation 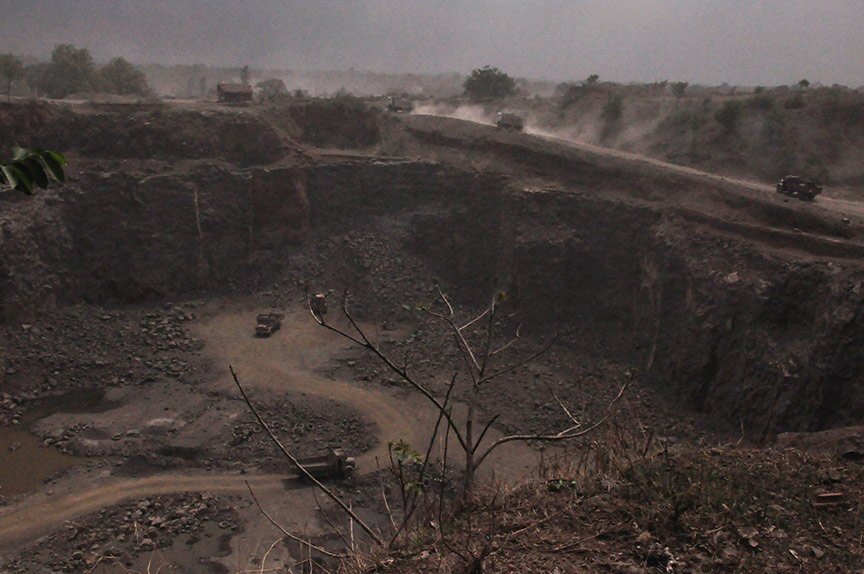 This is what became of Paran Maddi's and others' fields – a quarry more than 100 metres deep. The road seen in the upper right corner has a similar quarry on its other side. Borudi has been gouged out by these quarries to such an extent that the hill resembles an open cardboard box with internal partitions, of the kind in which one buys a set of glasses, with the rims or the partitions serving as roads. We will be traveling along this road to a hamlet of Lokhnamara village, which perches on a junction between four quarries, all equally deep. The level of the villages and roads are, of course, what used to be the normal, mostly flat, top of Borudi Pahar, now paving roads and building malls all over India 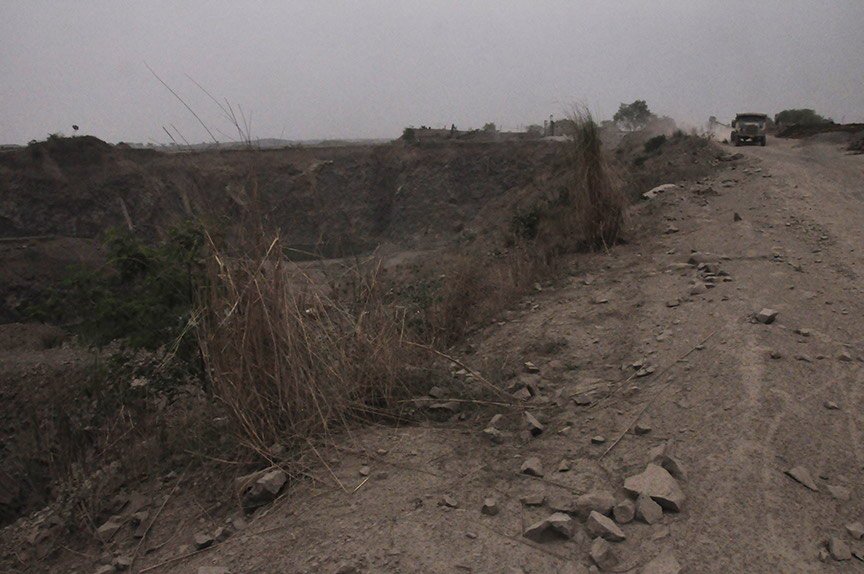 On the road to Lokhnamara, with quarry cliffs also to the right of this photograph. Ghasiram Hembrom says that last year alone, six people from Chandannagar and Lokhnamara died by falling into a quarry. Some were stepping aside to make room for the trucks, which don't slow down for anyone. They have holes for headlights and no number plates 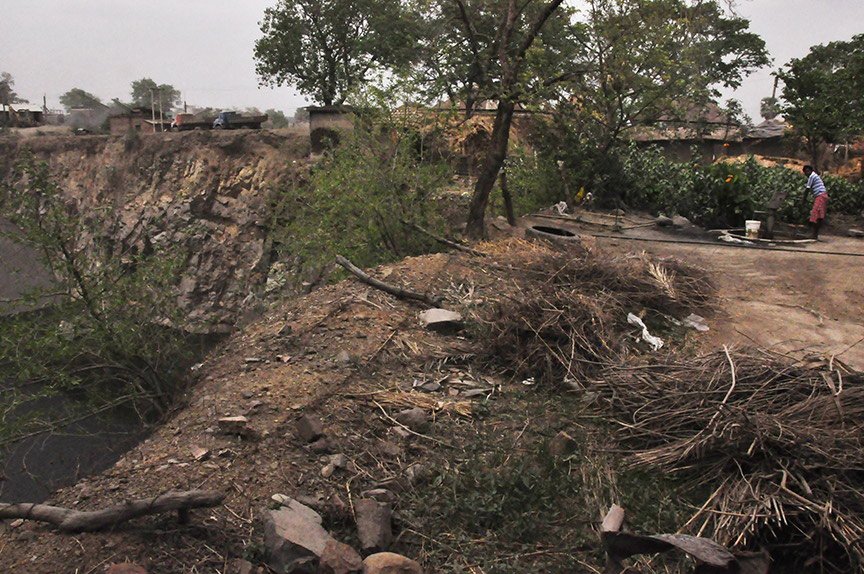 Lokhnamara, bordered by quarries on all sides. This hamlet has 50 households, while another, which we do not visit, has 100. Overall, Lokhnamara has twelve "TB" patients, but another ever-present danger is falling into a quarry 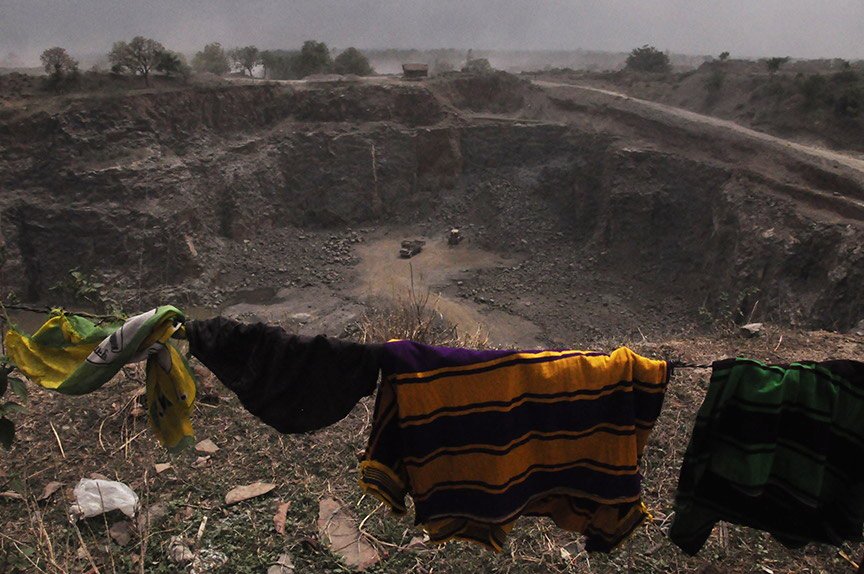 The quarry has cut into the hut in which I stand to take this picture. The residents have erected a precarious tin fence for protection 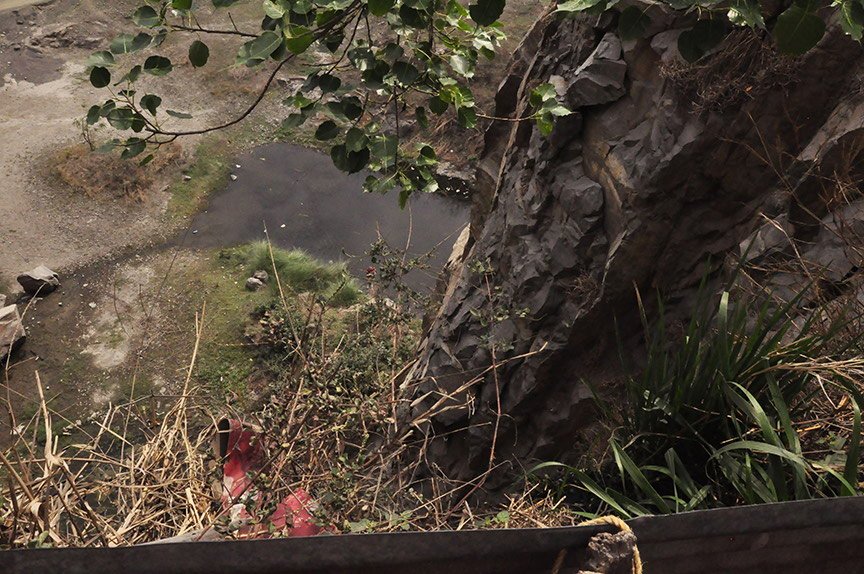 Looking straight down over the fence 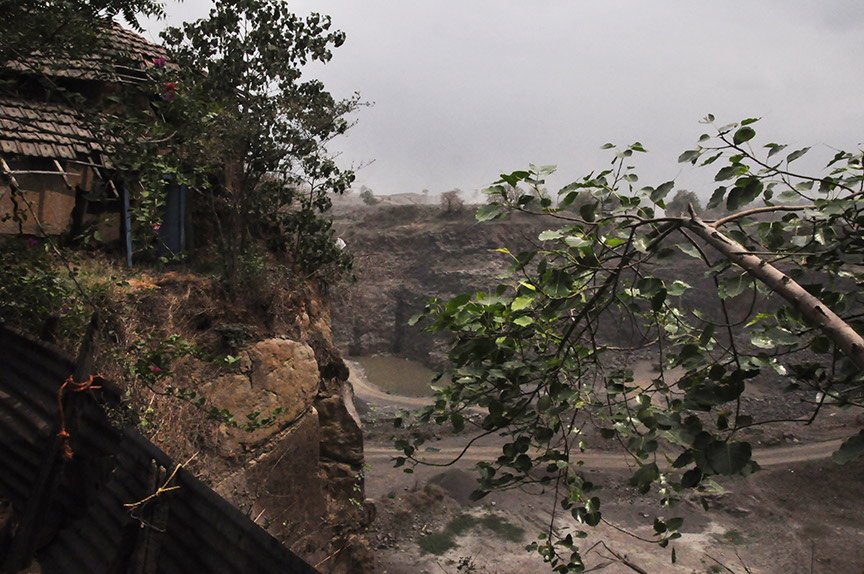 Looking back toward Chandannagar, on the horizon. The recent rain has cleaned the leaves of dust 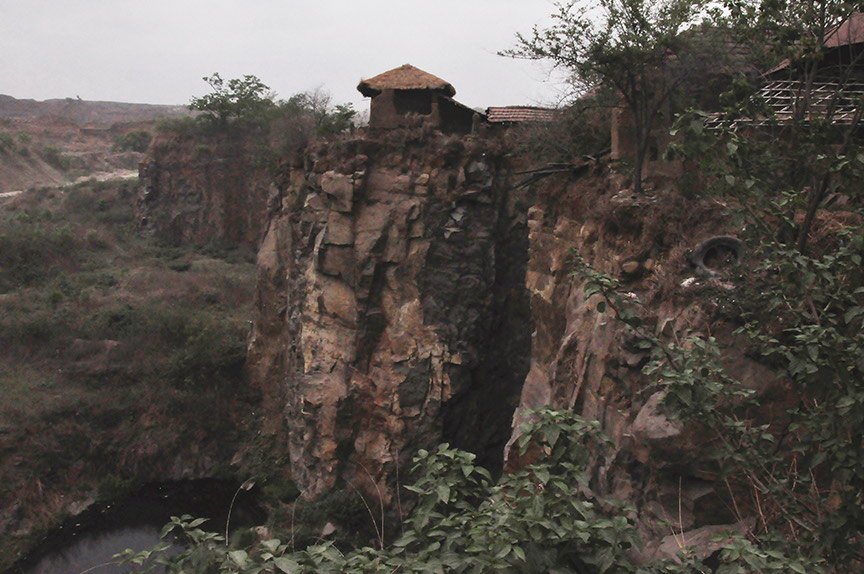 More of Lokhnamara, as seen from Lokhnamara. The trees in the centre left of this photograph are growing on what used to be the village cemetery 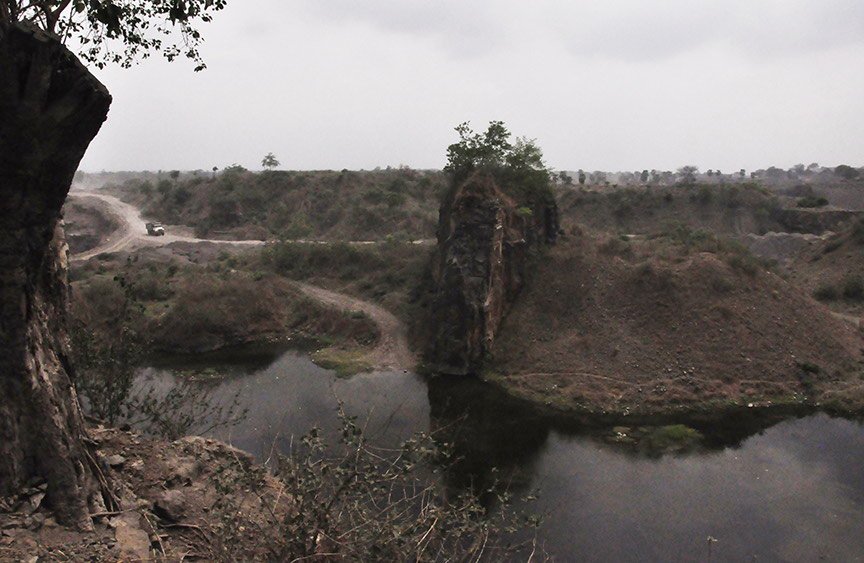 The cemetery of Lokhnamara village, which for some reason the quarry owners spared. It is separated from Lokhnamara's huts, to the left, by an abandoned quarry that has accumulated some water. Since the cliff face is 100 metres or more deep, no one can visit the graves. Nor does the village have anyspace to bury the dead – let alone a sacred grove for performing ceremonies 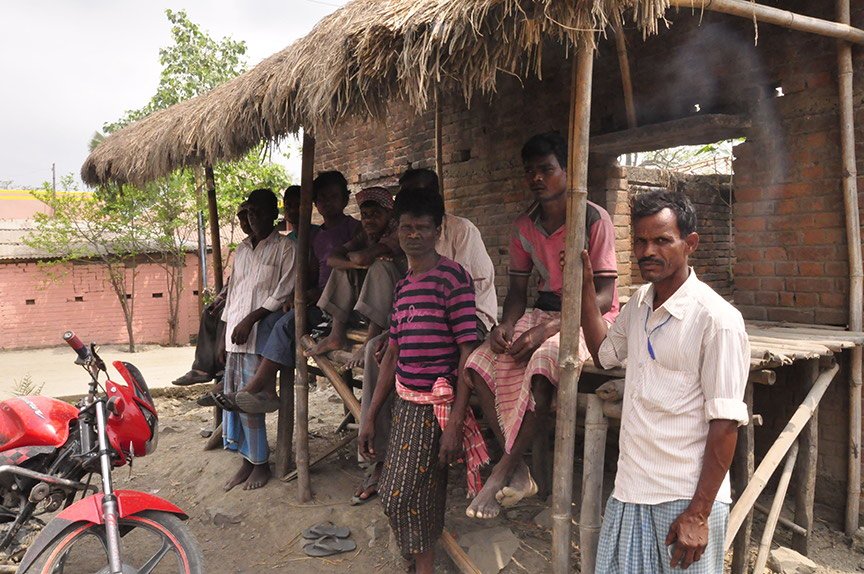 Lokhnamara men receive payments from quarry owners, enough to buy motorcycles, smart phones and alcohol, but not enough to provide hope. It is midday, but most seem drunk or drugged. This hamlet of Lokhnamara has only 50 homes, but some 30 widows, their husbands having died of alcoholism, falling into quarries, or disease. Oddly, few women are visible; most of them work in the crushers to support their families. At this point we are approached by men who aggressively ask what we are doing there, so we leave, back along the same road 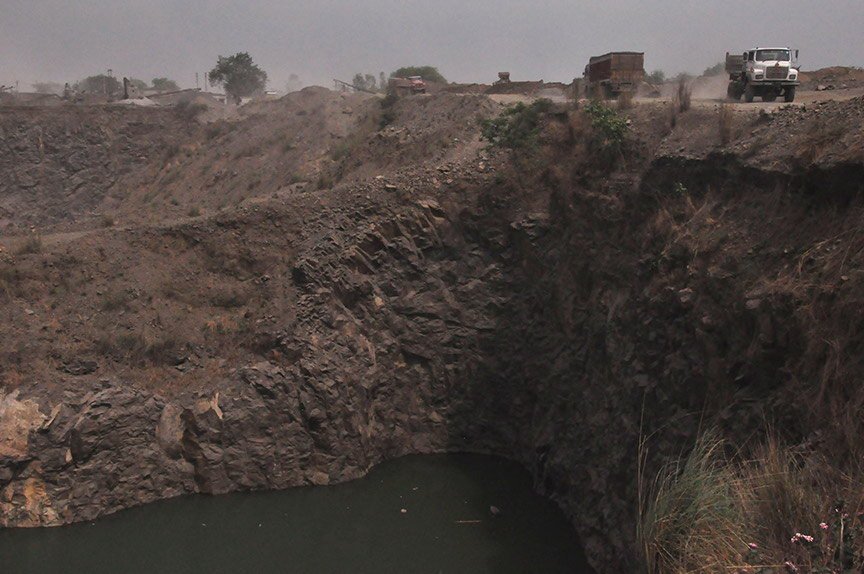 View of the road, this time on the way back toward Chandannagar, as seen from a crossroad, which too has a quarry on its other side. The quarry in this picture is abandoned, so that rain water, and possibly some seepage from elsewhere, has partially filled it. The water lies too deep to be of any use to the villagers 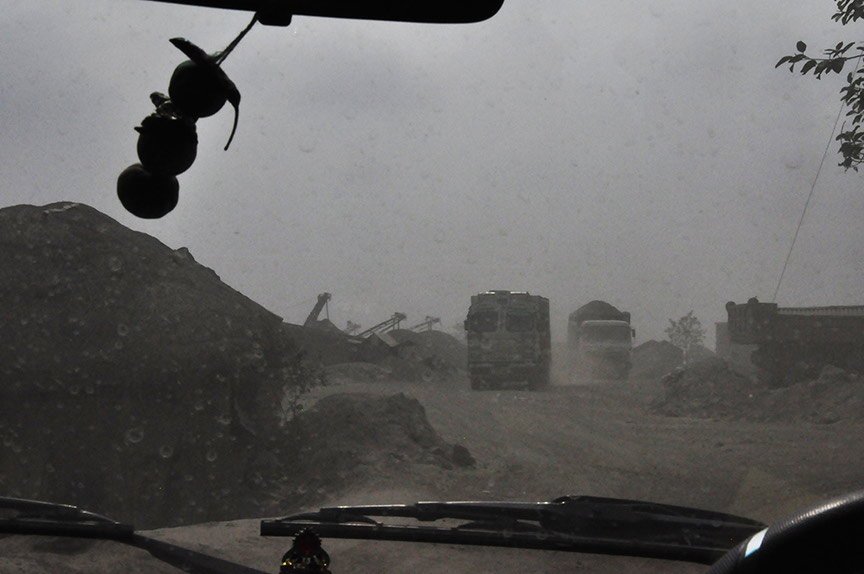 Back in the crusher area near Bhabanandapur, it is not safe to stop because of the quarry mafia, and I can only take pictures through the vehicle windows 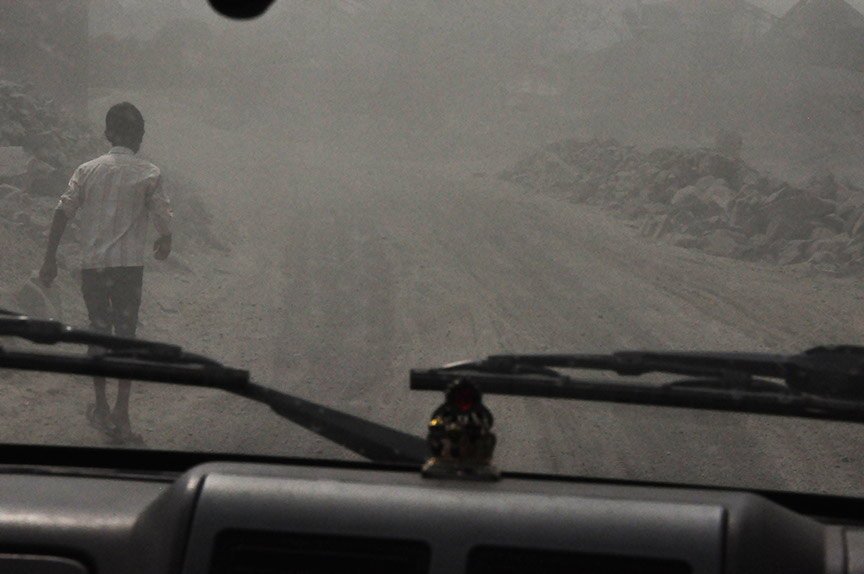 Some of the labourers are so slight, they may be children 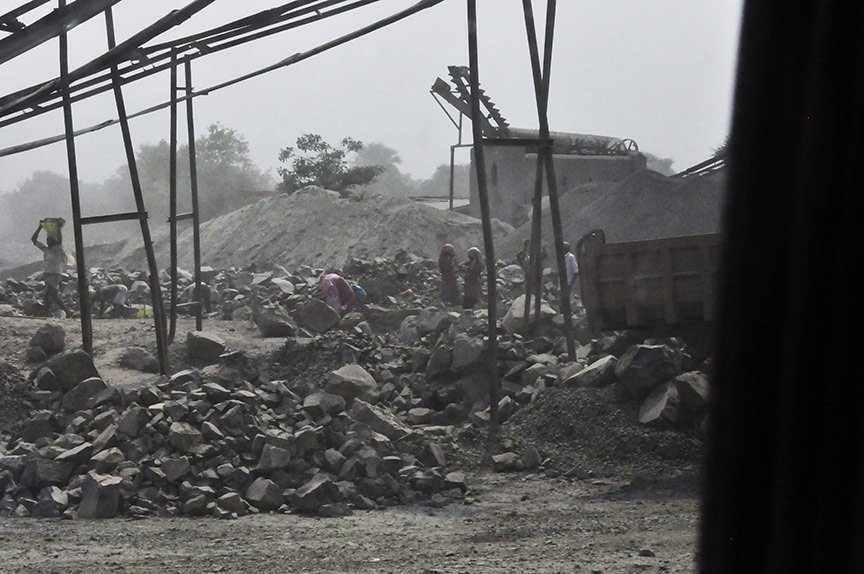 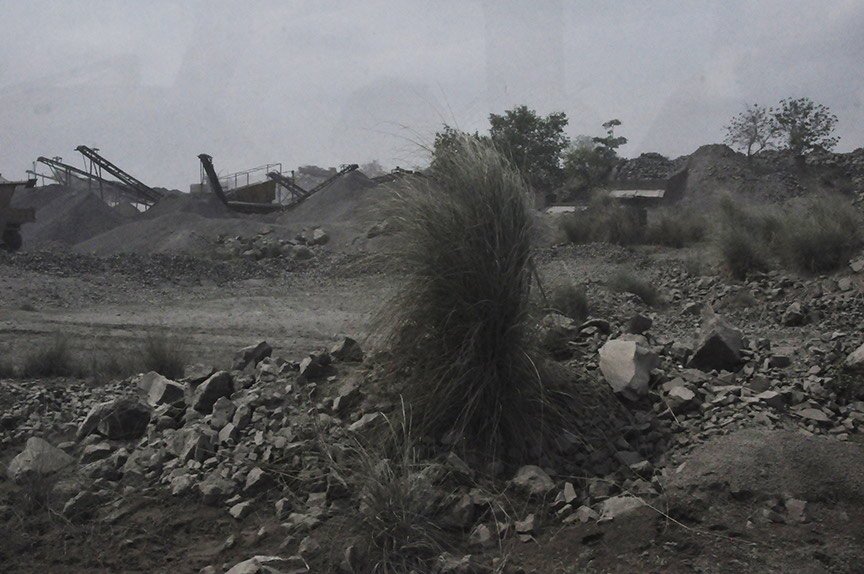 At this point we enter Bhabanandapur, which lies just beyond the quarry and crusher area, and leave behind what used to be Borudi Pahar. We pass fields, tubewells, goats, children – the normal east Indian countryside. Soon the hill of death lies far behind us and out of sight, so that we need not be disturbed by the reality behind the high-rises in which we live and shop, and the four-lane highways on which we race into India's glittering future

Madhusree Mukerjee is a journalist and the author of 'Churchill's Secret War: The British Empire and the Ravaging of India during World War II' and 'The Land of Naked People: Encounters with Stone Age Islanders'. She is also a physicist and has served on the board of editors of 'Scientific American' magazine.

Other stories by Madhusree Mukerjee