‘We don’t fear coronavirus or the heat now’

When their wages stopped and then food ran out, workers from Gaya, Bihar, employed in restaurants in Varanasi, made their slow way home – while others from the district remain stranded in faraway Tamil Nadu

“In the village school here, the quality of education is not good. So I took my daughters to Varanasi. Who knew I would have to take them back to the village within three months of their admission in a city school?” says Arun Kumar Paswan, who worked in the kitchen of a restaurant in Varanasi city, Uttar Pradesh, earning Rs. 15,000 a month, until it closed in March due to the Covid-19 lockdown.

In early May, when it was no longer possible to procure food for his family, Paswan decided to go back to Mayapur, their village in Gaya district of Bihar – around 250 kilometres from Varanasi. “I will be leaving with my family and a few others tomorrow at 3 a.m.,” Paswan told me on the phone on May 8. “We will walk to the [UP-Bihar] border and take a bus. It seems buses have been arranged from there. If we find a truck on the way, we will ask them to drop us to the border.

Paswan and his wife, 27-year-old Sabita, along with their three little children – daughters Roli, 8, and Rani, 6, and son Ayush, 3 – left the next morning. They walked to the Karamnasa check-post, across the state border, 53 kilometres away. There, they had to clear thermal scanning at a health camp set up by Bihar’s Kaimur district administration before being allowed to board a bus. “Luckily, we got a state-operated bus from there, which ferried us to Gaya,” he told me after reaching Mayapur on May 11. Once they reached Gaya, they waited for another bus to get to the village, where they have been in self-isolation since their arrival.

While Rani was happy to return to their old home, Roli complains that she misses the uniform of her ‘ sheher wala school’ (city school), says Paswan.

The Varanasi restaurant, where Paswan was working since August 2019, first shut on March 22 for the Janata Curfew, and then again on March 25, after the nationwide lockdown was imposed. He received his last salary in mid-March, but by the second week of April the situation became difficult. He stood in long queues, twice a day, to collect food packets distributed by district officials in Varanasi.

But on May 8, Paswan had told me, “We have stopped receiving the food packets since the last four days. We have nothing to eat. We have no option but to leave.”

While Arun Paswan and Kameshwar Yadav had to cover about 250 kilometres to reach home, Amarit Manjhi is stranded in Tamil Nadu – 2,380 kilometres away

Watch video: A lockdown journey from Varanasi to Gaya

It took Kameshwar Yadav two days too, to make his way home to Ghatera village in Guraru block of Gaya. He was the head chef at a restaurant in Pandit Deen Dayal Upadhyaya Nagar (DDU Nagar; formerly known as Mughalsarai), located about 17 kilometres from Varanasi, in the adjacent Chandauli district.

Yadav set off from DDU Nagar on April 15, when the first phase of the lockdown was extended. “The shutdown of the restaurant emptied my savings and my family here had started running out of rations. I had to reach them at the earliest.” After a two-day journey, of about 200 kilometres, mostly on foot and the rest on a truck, Yadav reached his village on April 17.

When UP sealed its borders on March 23, Yadav had moved into the restaurant with three other colleagues, where their employer provided them with food. But he was worried about his children – Sandhya, 10, Sugandha, 8, and Sagar, 3 – who were in Ghatera with his wife, Rekha Devi, and his parents. “My kids used to cry on the phone. The lockdown was extended and the wait seemed longer,” says Yadav.

He had hoped to rely on the green gram and wheat growing in the family’s 3 bigha (1.9 acres) farm, looked after by Rekha Devi and his parents. But rainfall earlier in April had destroyed the crop. The wheat was also affected by the rain, reducing the yield from an expected 70 kilos to 40 kilos – which he has kept aside for his family’s consumption. “Now all my hopes are on the new batch of green gram to be harvested in June,” says Yadav. 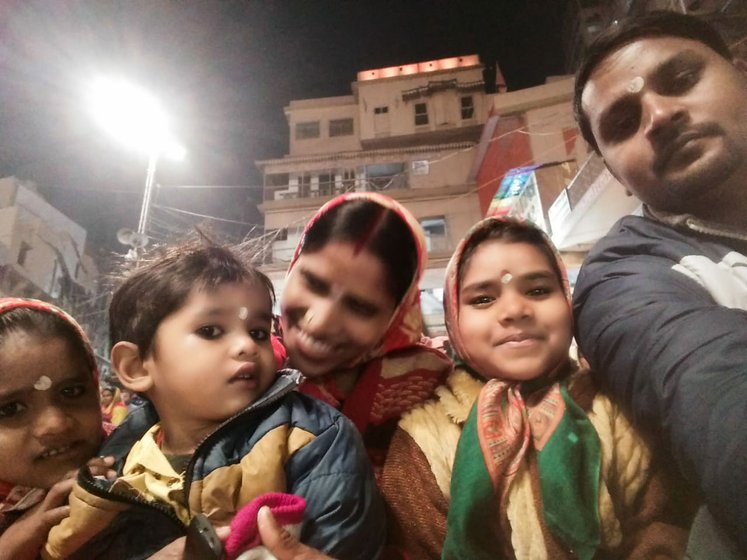 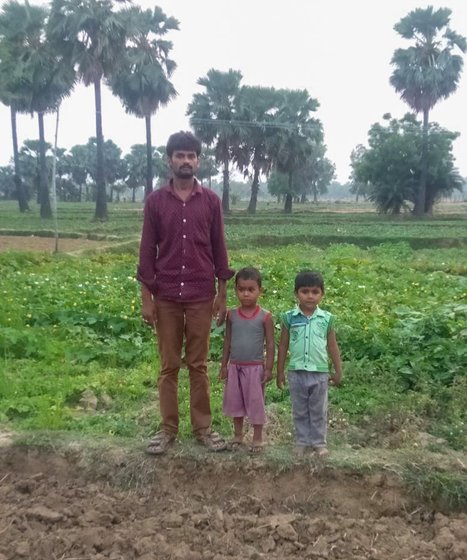 Left: Arun and Sabita Paswan and their children in Varanasi before the lockdown. Right: Kameshwar Yadav with his son and nephew in Ghatera

While Paswan and Yadav had to cover a relatively short 250 kilometres to reach home, Gaya resident Amarit Manjhi is still stranded in Tamil Nadu -- 2,380 kilometres away – along with 20 other migrants from his district. Manjhi, 28, had left Tula Chak, his village in Barachatti block, in October 2019, to work in a factory making roofing sheets, in Avinashi, taluka headquarters of Tiruppur district in TN.

He earned Rs. 8,000 at the factory, where around 150 other migrant workers from Bihar were also employed; all of them stayed in rooms provided by the factory owners.

On May 12, Manjhi and nine co-workers ( in the cover photo on top ) started on the very long walk home. But they had barely walked 2-3 kilometres when the police stopped them. They say they were beaten and then dropped back to their rooms. “The police said that we were violating the lockdown [rules], and fined us. One of our group’s members hurt his hand badly from the beating and we had to spend Rs. 2,000 to get it treated,” Manjhi told me on May 16.

“Instead of beating us, the police could have guided us on how to reach our hometowns. We haven’t received any help, neither from the factory owner, nor the local administration,” Manjhi says. At that time, he and the others didn’t have information about the ‘Shramik Special’ trains for migrant workers running between TN and Bihar. “One way or the other we have to get home. We don’t fear the coronavirus or the heat now. It might take 14 days, but we’ll walk,” he said.

Back home, in Tula Chak, Manjhi would have worked with his three brothers on their family’s farm, where they usually grow wheat and maize. But his share from 2 bighas (1.2 acres) of the land would be less than his earnings in Tiruppur – which is why he left home to work, he says. In Manjhi’s absence, his wife, Kiran Devi, 26, takes care of their plot. 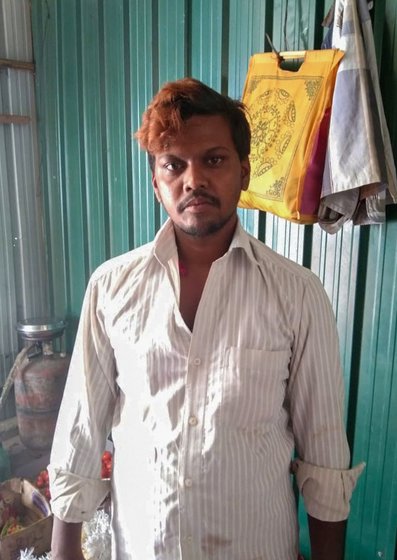 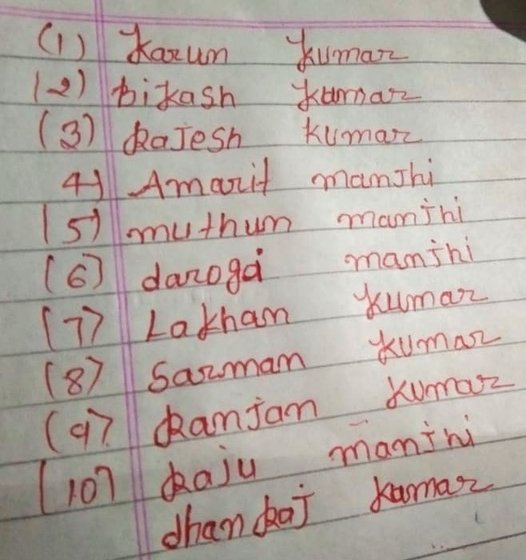 Amarit Manjhi in Tiruppur, Tamil Nadu (left), where he's been stuck along with others from Gaya (right) during the lockdown

The situation improved for Manjhi and his co-workers after the factory owners started sending them rations from May 19. He has only Rs. 500 left, and is hoping the factory will reopen so that he can earn again and send money home.

Back in Ghatera village, Yadav is considering fallback options. “I’ll look for NREGA work [at rural employment guarantee scheme sites], which is yet to start here,” he says.

In Varanasi, Abhishek Kumar, owner of The Flavours restaurant, and Yadav’s employer, says that all 16 of his staff members have returned to their hometowns in Bihar and Tamil Nadu. “Most of the chefs have refused to come back. I won’t be able to restart the business soon, even if the lockdown is lifted,” he says.

Paswan too is waiting for work at MGNREGA sites to start in Mayapur, and he will look for work in local eateries. His share from his family’s farm in Mayapur – income that is divided among 10 members of his joint family – is too little to sustain his family, he says.

He remains hopeful of an opportunity that could take him back to Varanasi. He and Sabita have left their belongings in their rented house there. “The owner has not agreed to drop the rent. When I am back I’ll have to pay him 2,000 rupees for each month that I am not there,” Paswan says.

Until then, he will take up road construction jobs or dig trenches. “Do I have any other option? he asks. “I have to take up whatever work is available to feed my children.”

Rituparna Palit is a student at the Asian College of Journalism, Chennai.

Other stories by Rituparna Palit