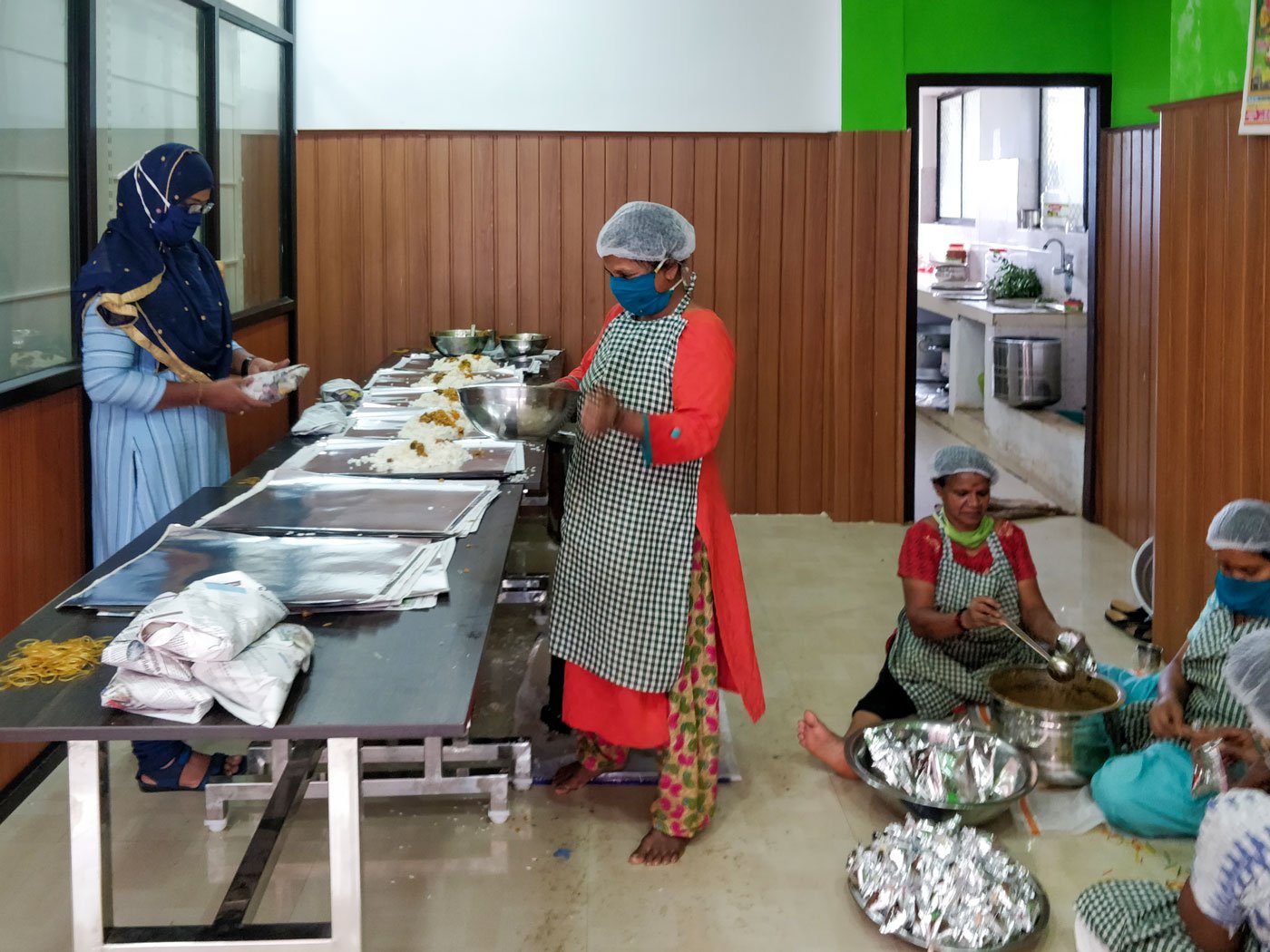 In lockdown time, Kerala’s 400-plus ‘Kudumbashree Hotels’, give cheap but wholesome meals to people low on income – students, medical attendants, security guards, drivers of ambulances and many others

“Janakeeya Hotel is a big help for people like us, who have become jobless in the lockdown,” says R. Raju, while waiting to buy a packed lunch at the outlet near M.G. Road in Thiruvananthapuram.

For more than a month now, Raju, a 55-year-old carpenter, has cycled three kilometres every day to reach Janakeeya and pick up lunch for just Rs. 20 – a meal of rice, pickles, three types of curries and a vegetable thoran (stir fry), which, he says, is “the best.”

"I was worried when they declared the lockdown,” adds Raju, who hasn’t been getting any jobs since then. “I had very little savings and did not think I would be able to buy food for two months. But the food here costs me just around Rs. 500 per month."

T. K. Ravindran, who works at a call centre, also depends on Janakeeya Hotel’s affordably priced lunch these days. Ravindran lives alone in a rented house in Thiruvananthapuram’s Pettah area, three kilometres from M.G. Road. He used to rely on his office canteen for afternoon meals. But that closed from March 23, when the Kerala government announced a lockdown a few days before the nationwide shutdown from March 25. “Other restaurants are really expensive. Even the delivery charges are high,” says Ravindran, who moved to the city two years ago from Kollam, around 70 kilometres away.

At the Janakeeya outlet he and Raju visit, a group of 10 women are busy  preparing the meal packets. Every day, they cook and pack about 500 lunches – rice in plastic-coated paper wrapped with newspaper, and curries in silver foil covers to avoid spillage. Their parcels-only ‘People’s ( janakeeya ) Hotel’ supplies lunch  from Monday to Saturday, 10 a.m. to 5 p.m. 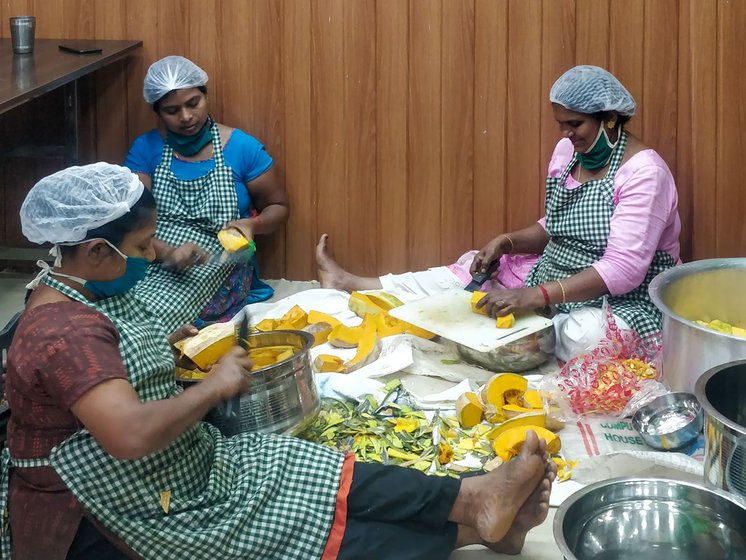 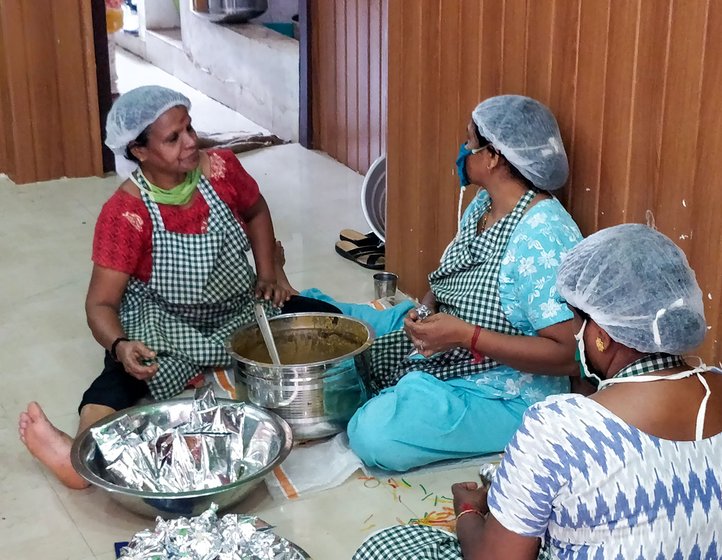 Kudumbashree members in the Janakeeya Hotel near Thiruvananthapuram's M.G. Road cook and pack about 500 takeaway meals every day

“We come here by 7 a.m. and start work right away. We finish cooking by 10 a.m. and start packing immediately afterwards. Vegetables are chopped the previous day, after the kitchen is closed,” says K. Sarojam, who supervises day-to-day operations of the outlet. “I mostly help with cooking. Each person here is assigned a job.”

Sarojam and the other women in her team are members of Kudumbashree, the name given to the Kerala State Poverty Eradication Mission,  a statewide collective of women’s groups. Its members operate and manage 417 (as of May 26) Janakeeya outlets across Kerala, popularly called ‘Kudumbashree hotels’.

The collective was launched in 1998, and its activities include micro-financing, farming, gender empowerment and development programmes for tribal communities. Kudumbashree is also the nodal agency for implementing central government schemes on food security, employment and livelihoods.

The subsidised meal programme was jointly started by the Kudumbashree Mission and local government bodies in Kerala. The three-room M.G. Road outlet – a kitchen, a hall where food is packed, and a counter for delivery – is located in a municipal corporation building. It is one of 22 Janakeeya hotels in Thiruvananthapuram.

Around 2 p.m. every afternoon, there is a rush of customers at the outlet – students who have stayed back in hostels due to the Covid-19 lockdown, medical attendants, ambulance drivers, security guards of buildings, drivers transporting essential goods, and others. “Most of our customers are those left without an income by the lockdown, who do not have enough money to buy food, or those who are not in a situation to cook food on their own,” says Dr. K. R. Shaiju, district coordinator of the Kudumbashree Mission. 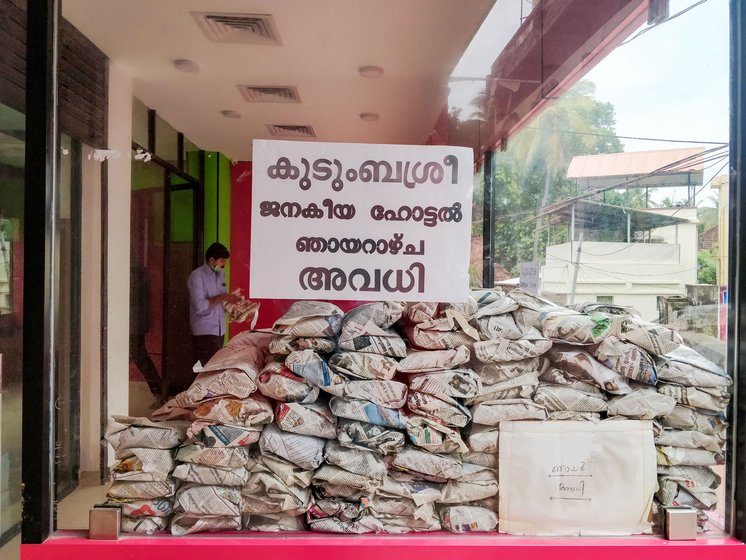 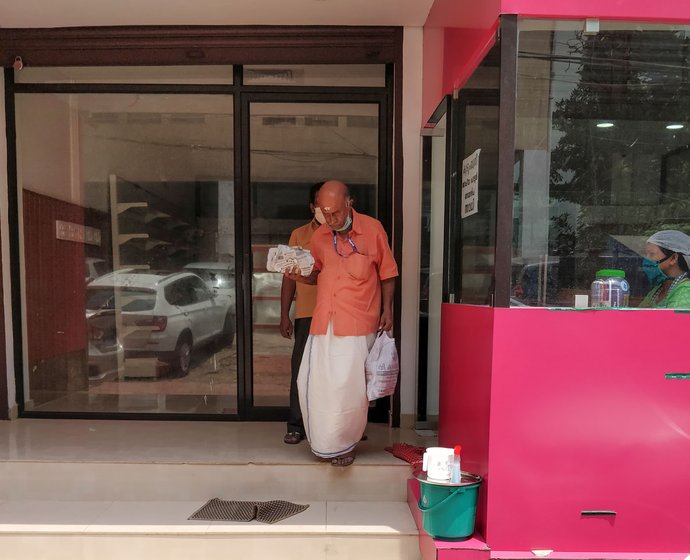 The lunch parcels, priced Rs. 20, are stacked on the counter. They are mostly bought by people left with barely any income in the lockdown

The ready meal packets are stacked on a counter at the entrance. A Kudumbshree worker, wearing a mask and gloves, collects the money and hand over the parcel. “Even when a line is formed, we ensure that the social distancing rules are followed,” says S. Lekshmi, a member of the Kudumbashree group managing the outlet.

Lekshmi and Sarojam are among Kudumbashree’s 4.5 million members, who are organised through neighbourhood groups (NHGs). In nearly 60 per cent of Kerala’s 77 lakh households, at least one family member is affiliated to this collective.

Each Janakeeya outlet is run by a nearby NHG. The team managing the M.G. Road outlet belongs to the NHG from Kuriyathi, around five kilometres away. They prepare roughly 500 meal packets every day, which are usually over before the counter shuts. Only on rare ocassions have they run out of food, says Sarojam. “And sometimes we are left with five or six packets, which we take home with us.”

The launch of the M.G. Road outlet on April 8 came as a blessing for A. Rajeev, who works from 8 a.m. to 5 p.m. The 28-year-old has been delivering medicines to hospitals and medical stores in his pickup van since the lockdown began on March 23. “The first week of the lockdown was really difficult as no restaurants were open. My mother used to wake up early and prepare my lunch,” he says. “The outlet is very accessible as most of my deliveries are around this area. I’m getting a month’s meal from here for about Rs. 500. I hope they will continue this even after the lockdown. It will help so many people like us.” 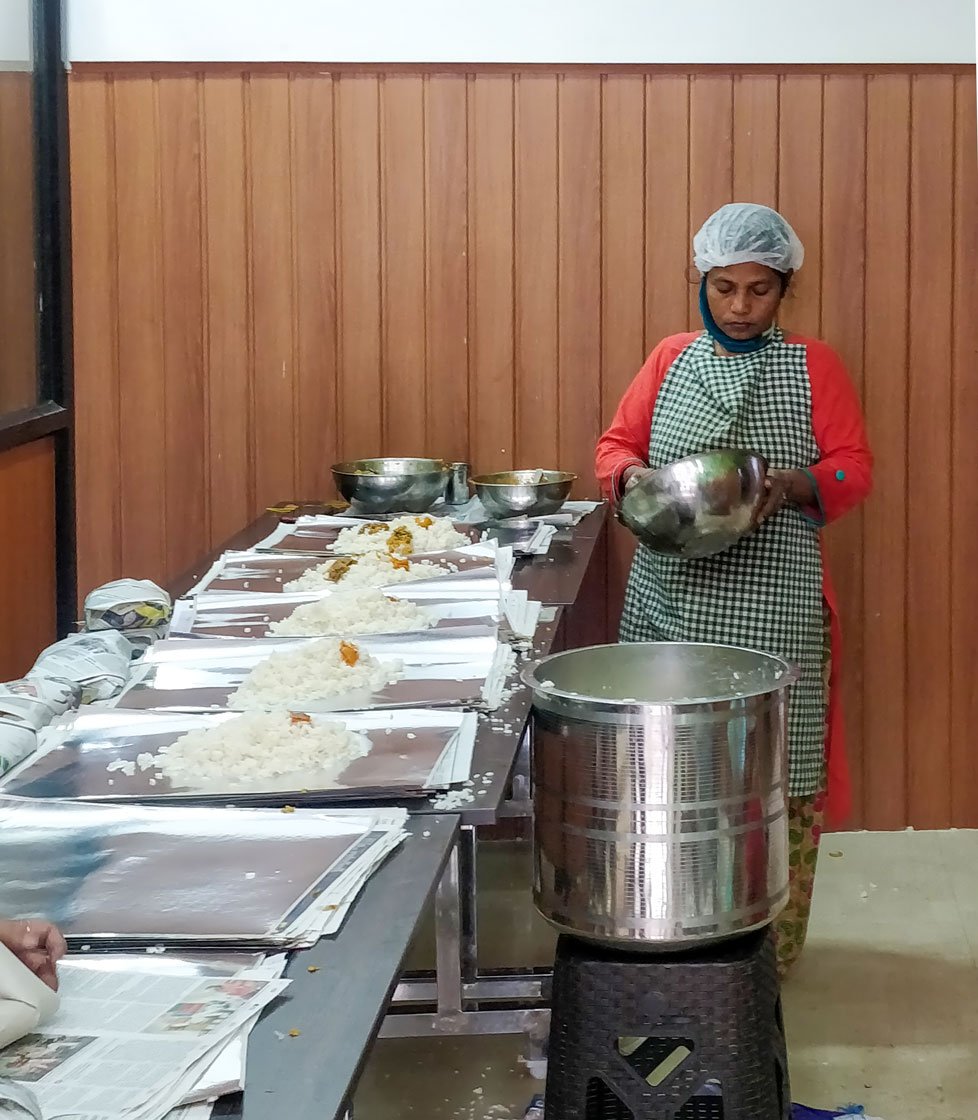 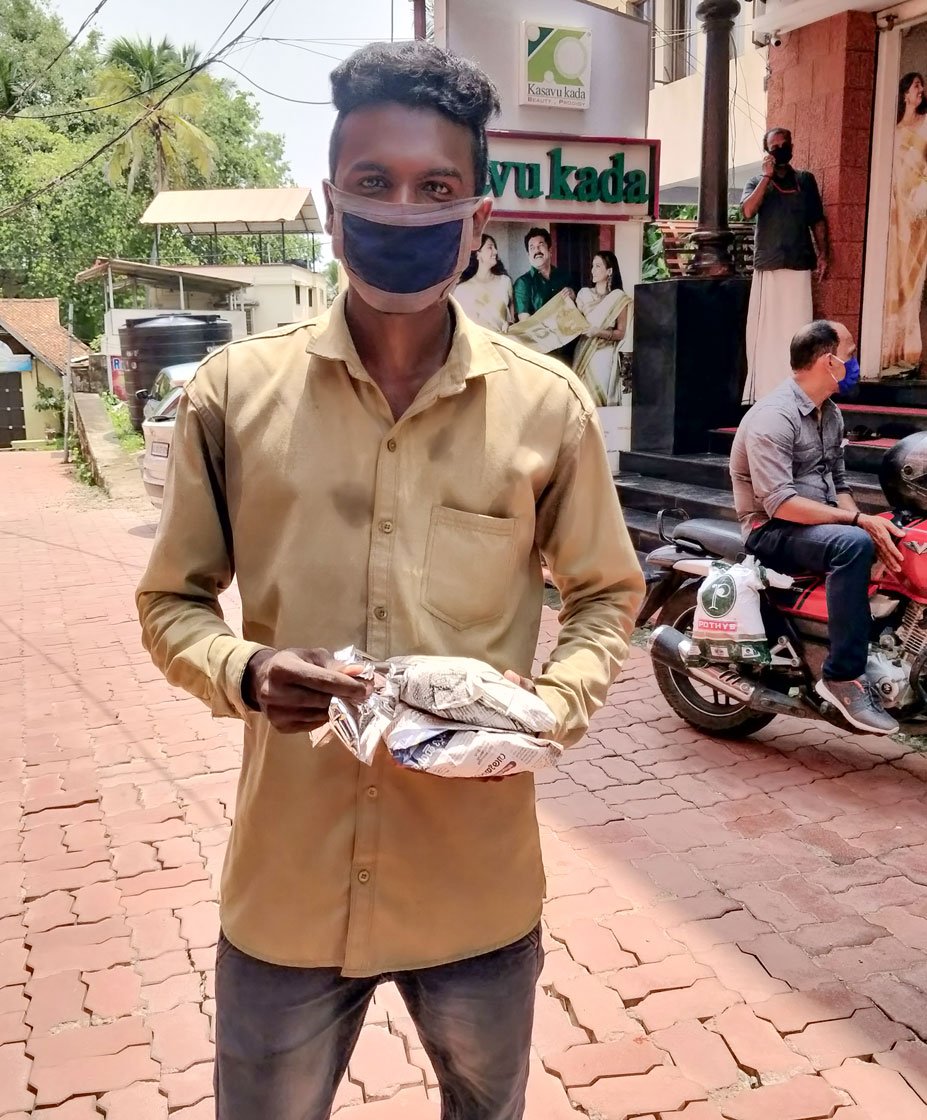 Left: Rice is packed in coated paper. Right: A. Rajeev with his meal packets. 'I hope they will continue even after the lockdown'

The Janakeeya meal has also helped Krishna Kumar and his elderly parents, who depend on his earnings. The family lives in the Sreevaraham area in the south of the city. “I buy two packets of lunch every day for the three of us,” he says. “On Sundays, we cook something simple like dosa or boil a packet of oats.”

Kumar was working as a plumber for a contractor before the lockdown, for a daily wage of Rs. 800 on the days he was called to work – earning a total of around Rs. 16,000 a month. “The contractor has given me half a month’s payment for these two months [April and May]. I hear that they might extend the lockdown. I don’t know for how long he can keep paying like this,” he says.

The Kudumbashree hotels were launched as part of  the state government’s Hunger Free Kerala programme in early 2020. The concept of the hotels was announced by the state’s finance minister Thomas Isaac during his budget presentation speech on February 7.

The first outlet was opened in Mannanchery town, in Alappuzha district, on February 29. After the extended nationwide lockdown was declared on March 24, the state’s Left Democratic Front government ramped up its efforts to open more of the hotels. By May 26, the Janakeeya Hotels in the state had collectively sold nearly 9.5 lakh meals, each priced at Rs. 20.

Kudumbashree also manages the canteens at many state government offices. But its members had not handled anything on such a large scale before as the Janakeeya outlet. Sarojam admits to being sceptical when she first heard about the idea. She had no experience running a kitchen, let alone heading one. 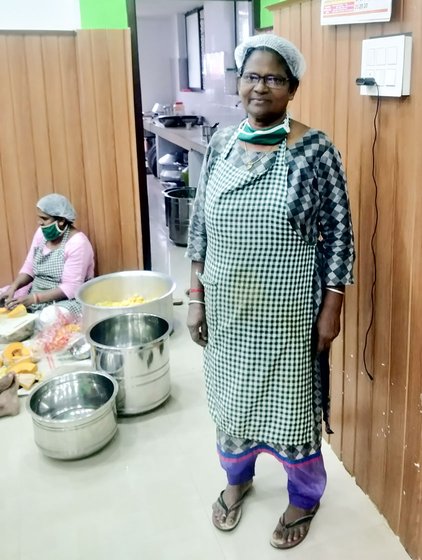 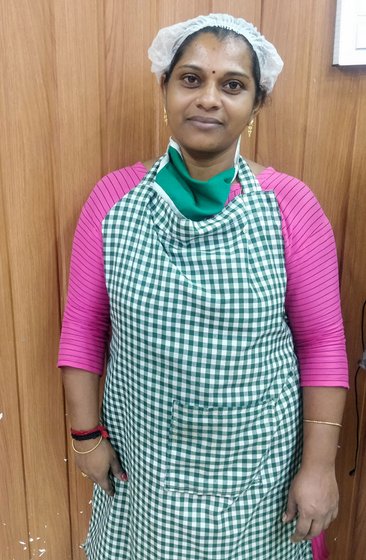 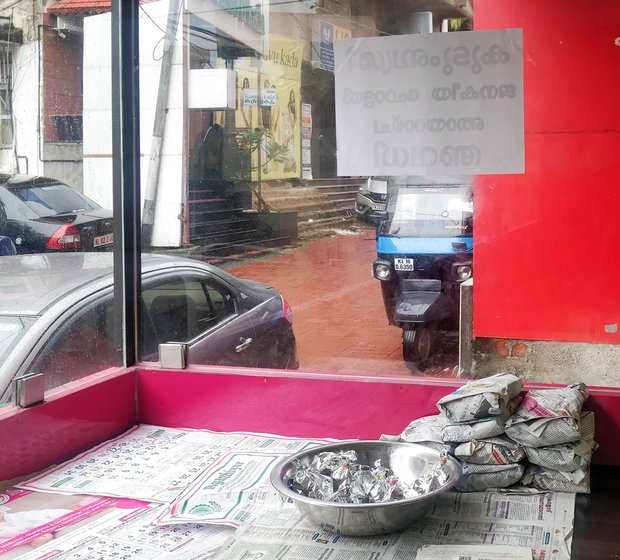 Left and centre: K. Sarojam and S. Lekshmi. We had never run anything of this scale,' says Sarojam. Right: The packets are almost over by 3 p.m.

As the president of her NHG, Sarojam’s work in the past included conducting meetings, administering loans, and supporting the businesses set up by Kuriyathi NHG’s members, such as making soaps, pickles and handicrafts. "We had never run anything of this scale. I was not sure if we would manage this properly," she says.

The Kuriyathi NHG group started the Janakeeya outlet with an initial fund given by the Kudumbashree Mission. The Kerala State Civil Supplies Department supplies the rice, vegetables and other commodities at subsidised rates, and expenses such as rent and furniture are covered by the Thiruvananthapuram Corporation. The Kudumbashree Mission gives its members a subsidy of Rs. 10 on every meal sold. “With all the subsidies, the approximate cost of a meal packet comes up to a little above Rs. 20 (before the Rs. 10 subsidy from Kudumbashree),” says Sarojam.

The NHG team earns  Rs. 10 for every lunch packet sold, Shaiju says. Their earnings are shared equally among the 10 members managing the outlet, says Sarojam.

They did not expect their outlet to become a success, she adds. “We are happy when people say good things about us.  Even though we were hesitant, we decided to go forward with this, and now we are glad we did.”

At 3 p.m. the line starts thinning at the M.G. Road outlet. The all-women team begins cleaning the kitchen and cutting vegetables for the next day.

Nearby, standing with his cycle, Raju points to his parcel, and says, “These women will not let anyone go hungry.”

Other stories by Gokul G.K.