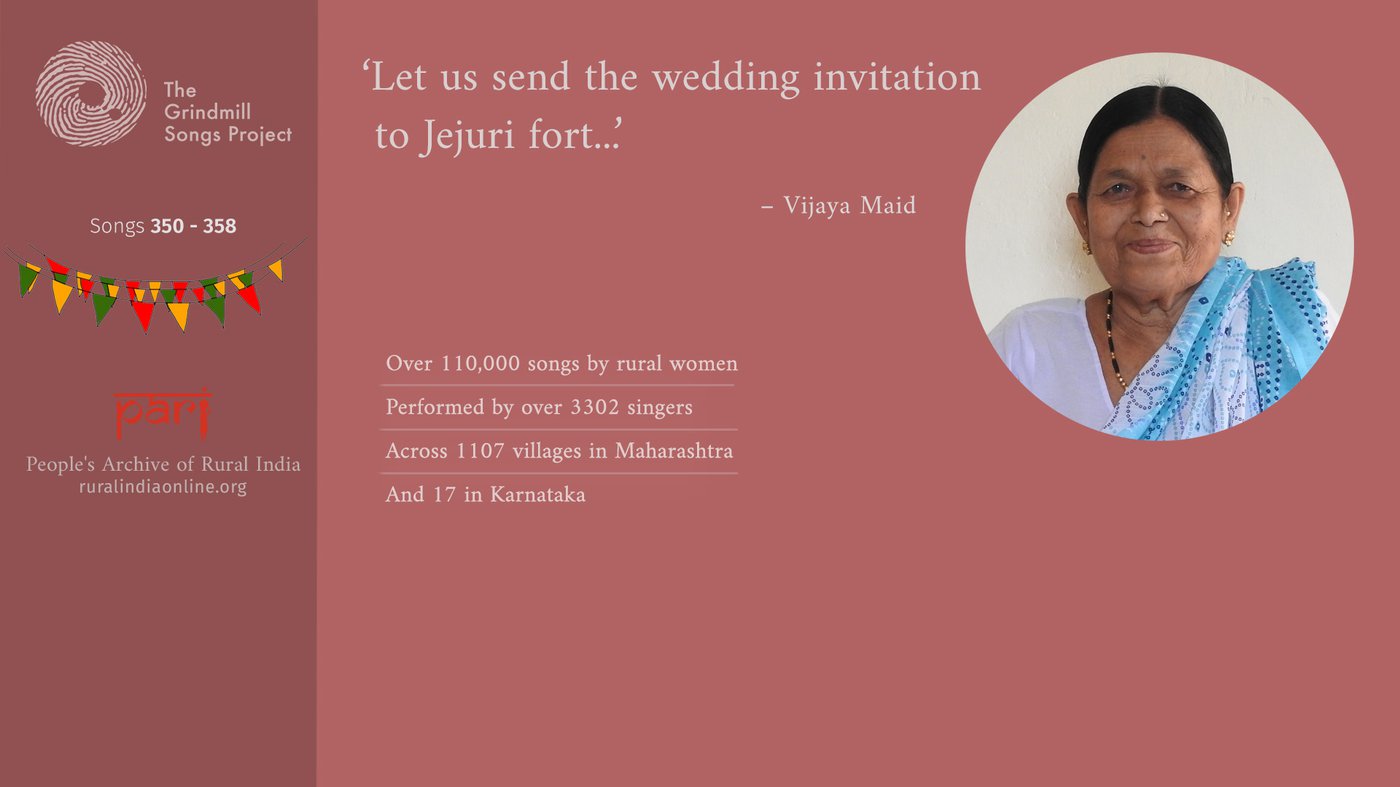 'I invite you, Ganaraya, to a family wedding'

Vijaya Maid, from Shirur town in Pune district, sings nine ovi inviting her favourite deities to a family wedding – and her songs paint a vivid picture of the scenes from the joyous event

“I know a few songs, why don’t you take them too?” Vijaya Maid said to Jitendra Maid, her college-going son, when she got to know that he was going village to village collecting grindmill songs. The “few songs” turned out to be 173 – that's the number of ovi she contributed to the Grindmill Songs Project (GSP).

Jitendra was a part of the original GSP team that had collected over a lakh jatyavarchya ovya (grindmill songs) in the 1990s. The singers, all women, were from mostly Maharashtra and a few from Karnataka. (Jitendra has continued as a member of the GSP team, now at PARI, where he assists Ashatai Ogale in translating the ovi from Marathi into English.)

“I studied only till saatvi (Class 7), but all my children are educated and are either self-employed or hold jobs,” said Vijayabai, now 80, when we met at Jitendra’s home in Pune three years ago. She was happy to sing some grindmill songs for us, but was finding it difficult to remember the lines at first. She recollected them with her son's help, and so we could record many songs.

Vijayabai learned grindmill songs from her mother and aunt – the songs have been handed down by women from generation to generation. She was the eldest of eight sisters and three brothers. The family lived in Palasdeo village, in Pune's Indapur taluka. S he had to work hard, said Vijayabai, both before and after she got married at 16.

Faith in god and the worship of deities, specially on auspicious occasions, is an integral part of Vijayabai’s life – like it is with many women in Maharashtra

After she got married, Vijayabai moved to Shirur, a taluka town in Pune district. Kantilal Maid, her husband, worked as a mapadi (weighman) at the local agricultural produce market. He worked at a ration shop in the evenings, for which he was paid in millets – five kilos of jowar or bajra every week.

It was difficult to cover the household expenses of a growing family with the little money he brought home. “My mother started working for a tobacco factory in Shirur. She would bring home loose tobacco to pack into small sachets,” remembered Jitendra. He and his siblings – five brothers and a sister – would help their mother. “We used the flame of a kerosene lamp to seal the packets.”

In the 1980s, for delivering 1,000 packets, Vijayabai earned 12 anna (75 paise). This work brought the household’s income up to about Rs. 90 every month. To contribute to the finances, Jitendra and his brothers did odd jobs like selling vegetables and distributing newspapers while attending school.

Like it is with many women in Maharashtra, faith in god and the worship of deities, specially on auspicious occasions, is an integral part of Vijayabai’s life. In this instalment of GSP, her nine ovi , are an invitation to gods and goddesses to attend a family wedding. It is a tradition in many Hindu families to invite the family deity first, before relatives and friends. The invitation card is placed in front of the deity’s icon to seek blessings for the bride and groom. 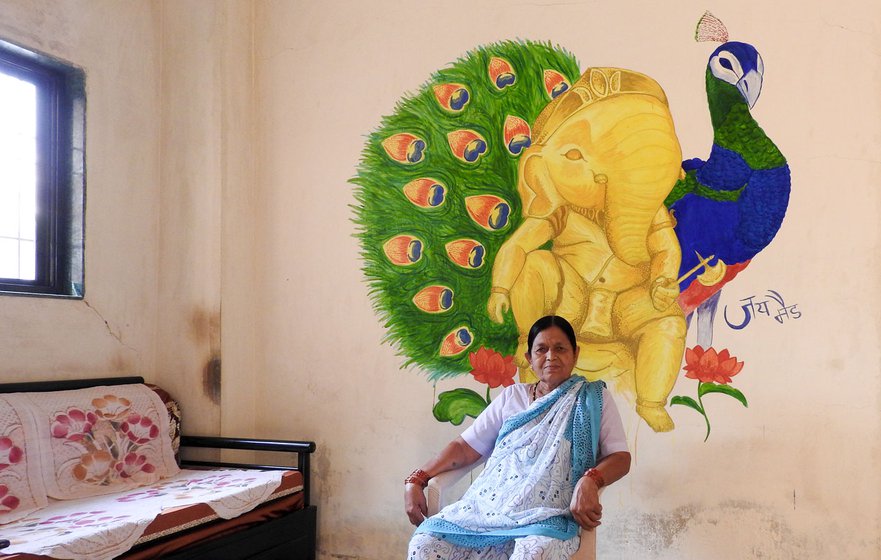 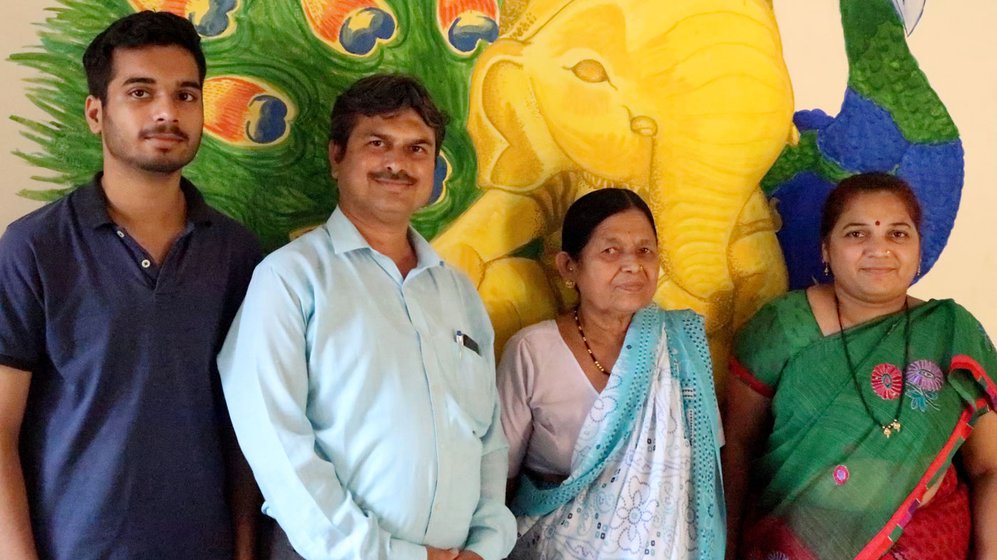 In these ovi , the singer invites Khandoba (or Khanderao) and his consort Mhalsa – deities of the temple at Jejuri fort – to join the varhadi , the marriage party. The goddess of Tuljapur temple, Ambabai (or Ambika), whose chariot is drawn by tigers, is invited too. The singer prays to Ganaraj (or Ganapati) to bless the new clothes purchased for the joyous occasion. She says that the wedding pandal's poles must be wide enough to make room for the bolster on which Ganaraj will recline.

The narrator paints a vivid picture of the wedding-day scenes. The Brahmin man performing the ceremony is told to not create problems, because otherwise “people will gossip about my dear daughter.” The ground outside the pandal is slushy because the bride’s father bathes there for a ritual. Though clothes are expensive in the wedding season, the narrator tells her brother, the bridegroom’s mother must be gifted a sari. On the wedding day, hammocks made from saris cradle the babies of the bride's sisters – they are all young mothers, the singer says.

In the last ovi , the singer once more invites Ganaraj to the family wedding and urges him to bring Goddess Sharada with him. She also requests the god to bring new saris when he comes, implying that the clothes bought for the wedding are the blessings of Lord Ganapati.

A wedding invitation from me to you, Goddess Ambabai
I place new saris at your feet, Lord Ganaraj, for your blessings

Send the wedding invitation to my most revered goddess of Tuljapur

Goddess Ambika has tied tigers to her chariot

Brahman, the wedding invitations have been sent; don’t create any problems now
People will gossip about my dear daughter – the bride-to-be

On the wedding day, why is the ground so slushy?
The bride Pooja’s father has had a bath

It’s the marriage season, clothes have become expensive
For your sister – the bridegroom’s mother – you must buy [a sari] dear brother

On the wedding day, hammock cradles hang from pole after pole
The bride’s sisters are all young mothers

I invite you, Ganaraya, to a wedding in my family
Bring new saris and bring Sharada too 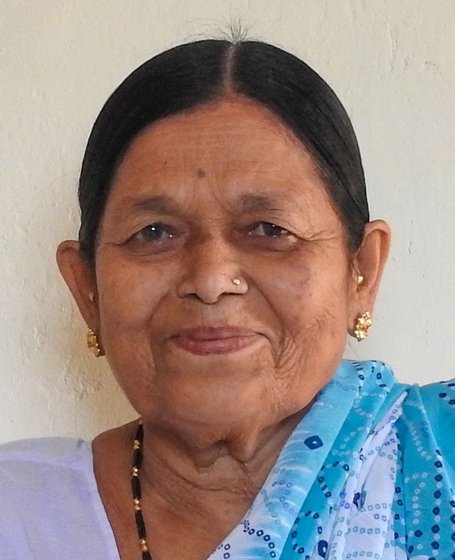 Date : The singer’s video and songs were recorded on October 8, 2018