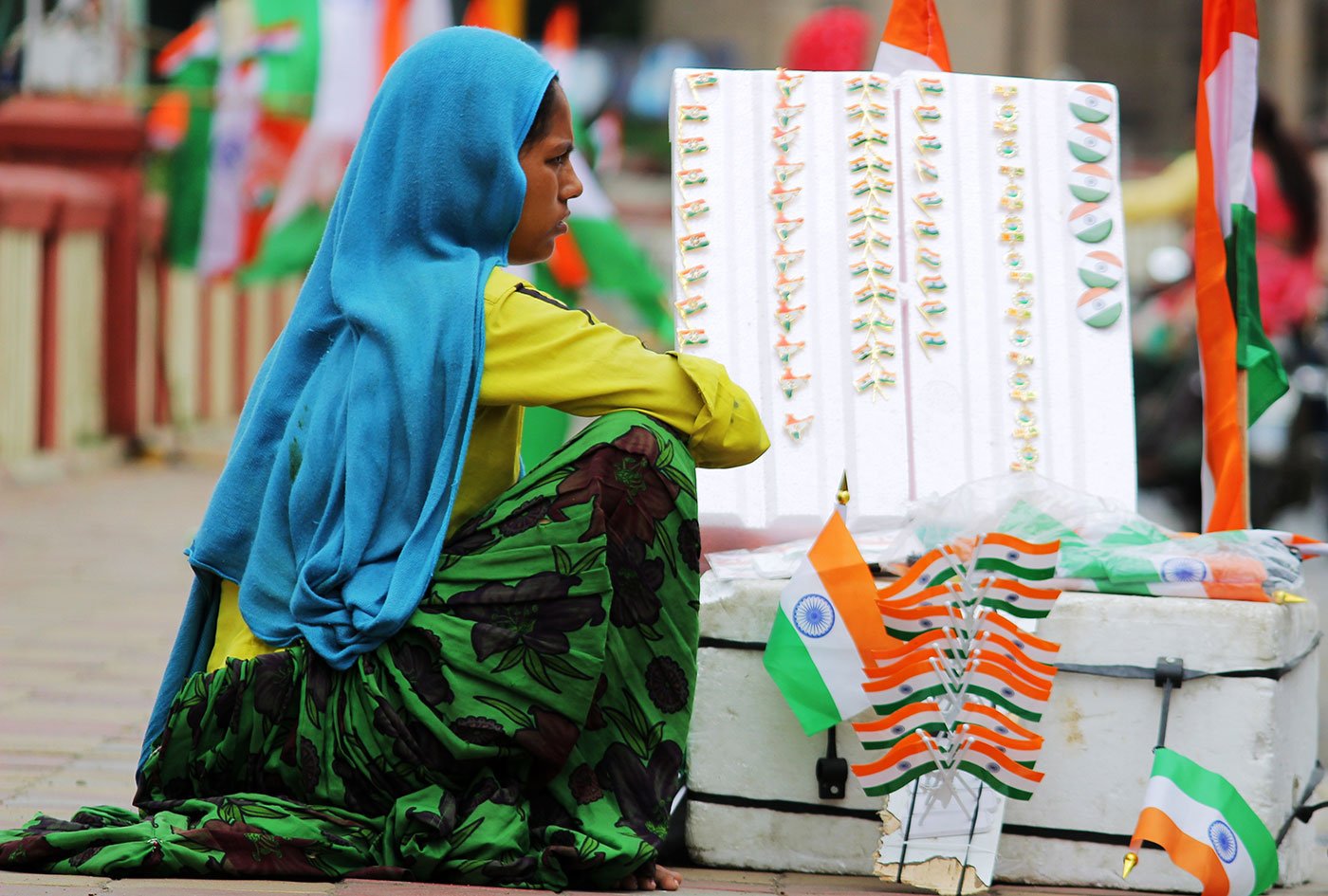 Flagging hunger: the Bagarias in Vadodara

The flag-sellers on the streets of Vadodara are mostly hungry, despairing migrants from the Sawai Madhopur and Tonk areas of Rajasthan, for whom Independence Day is a time to try and earn something

“Independence,” says Sundar Bagaria, “is for the rich and powerful.” Sundar has been selling small Indian flags for three decades on the streets at Kala Ghoda Circle opposite the Maharaja Sayajirao University’s main building in Vadodara in Gujarat. “Some days we eat more, some days we eat less and many days we have slept hungry…” she adds.

Like her, around 20 persons from the Bagaria community set up stalls in the vicinity every day. At around 9 a.m. they start preparing for the work day: fixing the flags on styrofoam boxes kept on a plastic sheet on the ground, pinning tricolour badges, stickers and hand-bands on a styrofoam sheet kept upright. Some flags are tucked into pillars or on the pavement. Others are arranged on the plastic sheet along with tricolour caps.

They shut shop at 11 at night, earning around Rs. 200 over the 14 hours. Some go to the Fatehgunj flyover, the railway station in the Sayajigunj area, or other busy intersections, looking for customers.

Among them is 16-year-old Laxmi Bagaria (in the cover photo on top ), who has been selling flags since she was six. She comes here with relatives from Kakod village in Uniara tehsil of Tonk district in Rajasthan three times a year – around Independence Day, Republic Day and Christmas. “People from the municipal corporation come and ask us to move, but we somehow manage and come back,” she says 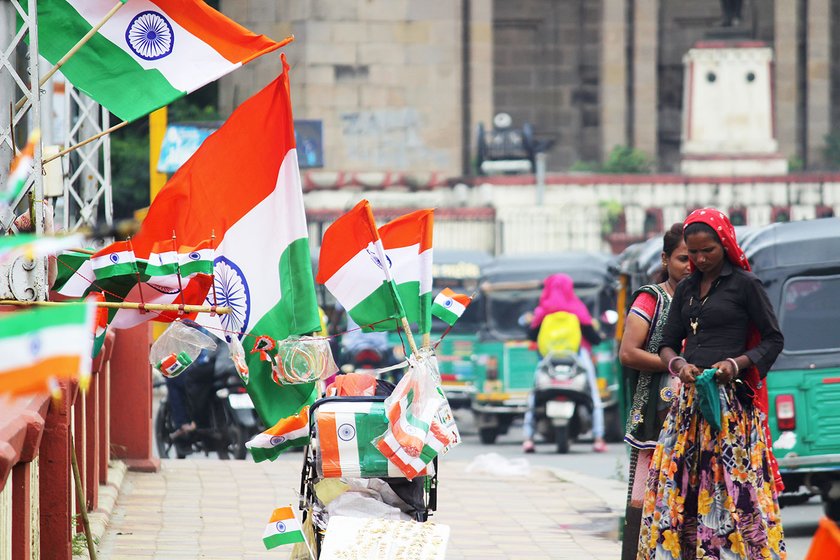 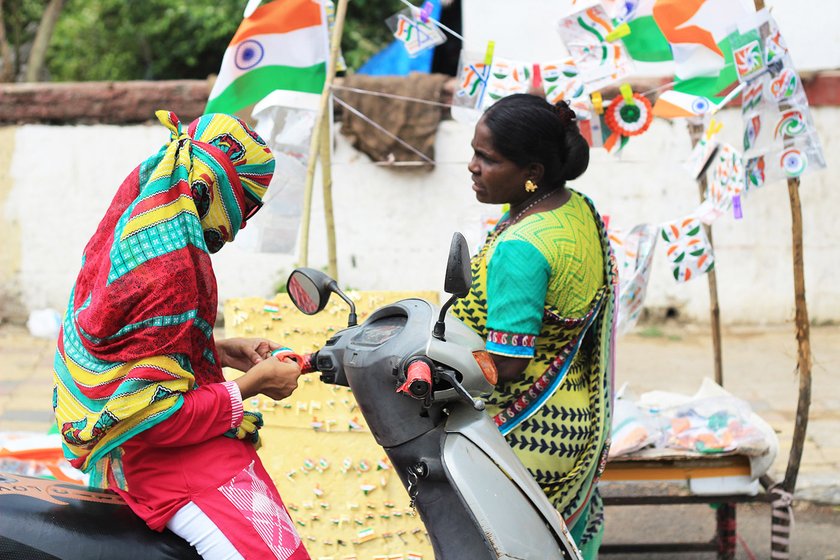 Around 20 persons from the Bagaria community set up stalls in the MS University area; others go to the Fatehgunj flyover or the railway station and other areass

Rakesh Bagaria, 19, has also been in this business since he was five. “We have to earn to feed ourselves,” he says. He gets all the tricolour items from Sadar Bazar in Delhi, travelling there by train. For these bulk purchases, he takes a loan of Rs. 20,000 from local jewellers in his village at an annual interest rate of 24 per cent.

Rakesh’s family lives in Dhingla Jatwara Khurd village of Sawai Madhopur block in Rajasthan. Like most of the Bagarias here – an OBC community – his parents work as agricultural labourers and sharecroppers, usually cultivating wheat and bajra . Their street business, the flag-sellers estimate, is probably three decades-old, when the Bagarias started migrating to the cities and towns looking for work, driven from their village by shrinking agricultural labour.

Rakesh goes home once the peak sale periods are over – he plans to return to his village on August 16 – where he is studying in the government school in Class 10. “People will fool you if you are not literate,” he says.

Mahendra is Laxmi’s cousin; his stall is a few metres away. He is 18 and, like her, studies in Class 10 in a government school back home. He occasionally comes to Vadodara to help his parents sell seasonal items. The family took a loan of Rs. 11,000 this year from a local jeweller to buy the items, but have so far earned only Rs. 4,000. 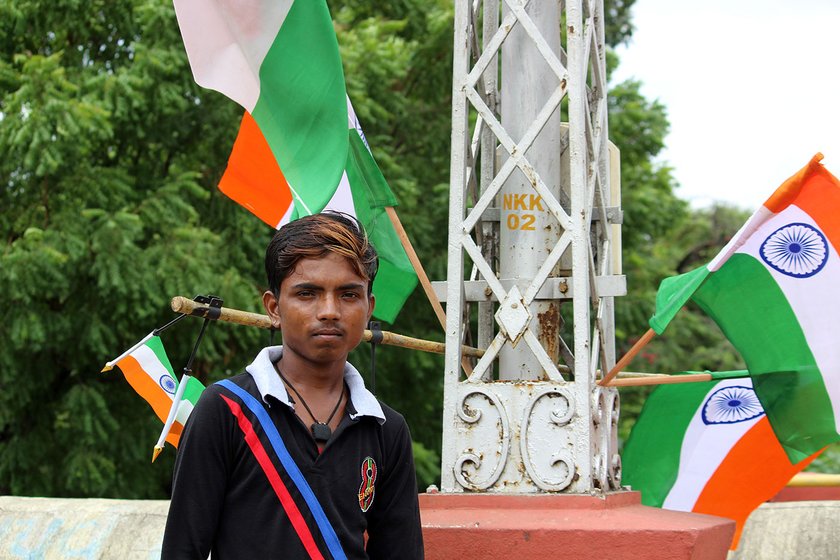 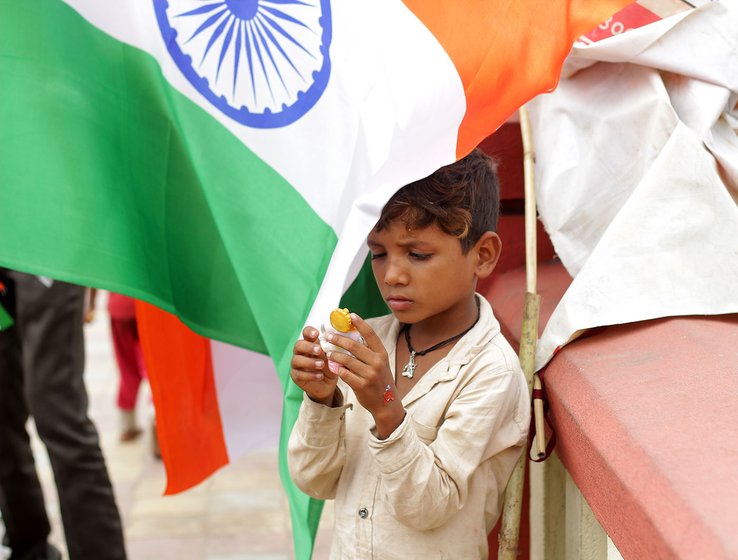 'We are not independent', says Mahendra (left), while Vishal (right), who goes into the traffic to sell flags, has no idea why people in cars buy the tricolour from him

“We are not independent,” Mahendra says. “There is no help from the government, no one asks about our suffering. Mummy and papa remain here, they sell small toys or balloons on other days and earn a little. I have to overcome this and become a big man, study further and ease my parents’ hardship.”

All the flag-sellers sleep on the pavement. Those with babies have cradles beside their stalls. Behind the railings of the bridge over the Vishwamitri river are their flimsy plastic tents. It becomes difficult when it rains at night, and they then run to the shade of a nearby bank’s building and squabble with the security guards. The public toilet nearby charges Rs. 5 per visit, which they cannot afford, so they defecate in the open.

As we speak, Mahendra’s mother Morabai brings him a vada pav to eat – it costs Rs. 10. “We can hardly meet our children’s requirements though we have struggled all our lives,” she says.

“Some vans come selling khichdi [for Rs. 10], but it tastes so bad, even a dog will not like it,” says Sundar Bagaria, whose stall is not too far off. The flag-sellers cook in groups on the pavements.  “Sometimes we cook – or we kill our appetite with biscuits. Or now I ask my son for money… We have to manage.” 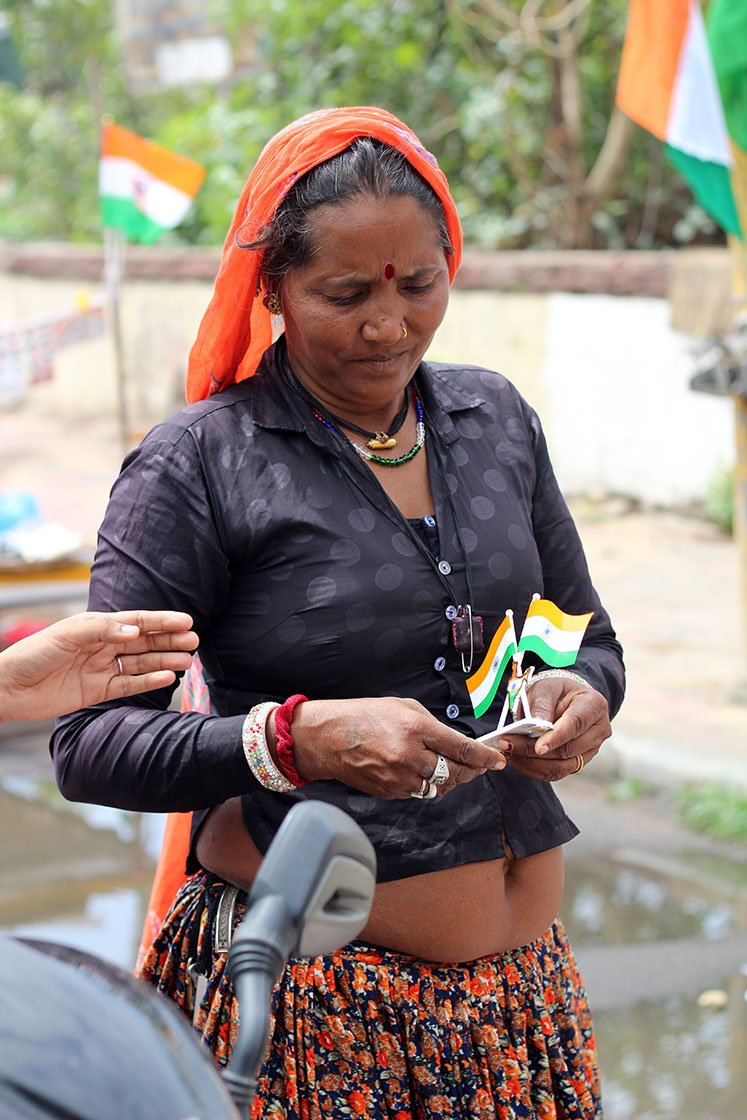 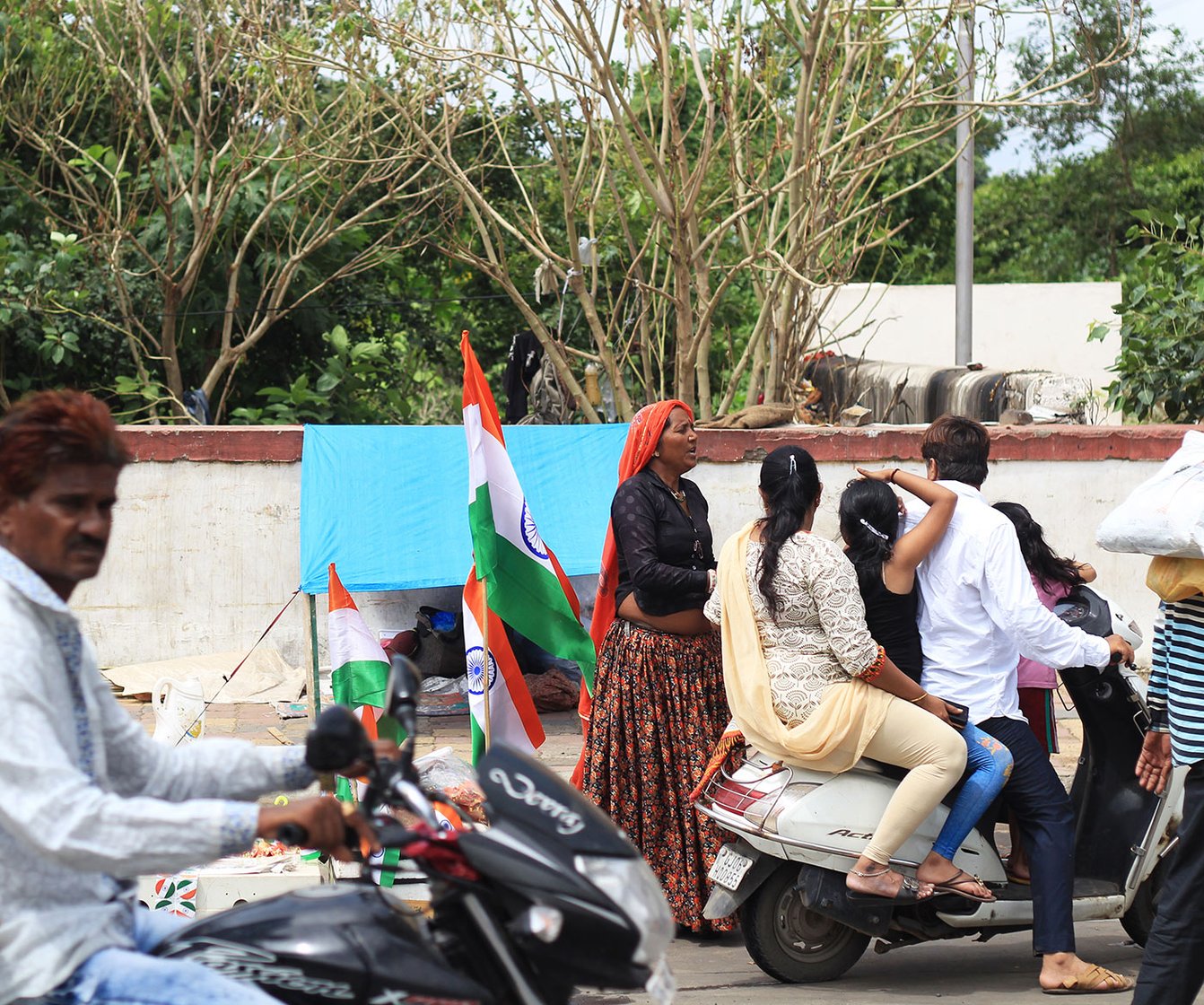 'Independence', says Sundar Bagaria, 'is for the rich and powerful'. She works 14-hour days selling flags and other items to earn Rs. 200, at most Rs. 300

Sundar, like the others, earns Rs. 200 a day, at most Rs. 300 – that is the earning per stall managed by 2-3 persons. Her son Suresh’s stall is around 100 metres away, with flags fluttering in the blue sky of an independent nation. The family is from Karmoda village of Sawai Madhopur block. Suresh runs the stall along with his wife Kamleshi. Their son Vishal is in Class 5, their daughter Priyanka is three years old. Suresh has a BA degree in Hindi from the University of Kota. “I am a graduate, but don’t have a job...” he says.

Last year, Suresh applied for Rajasthan’s state police services, but couldn’t get through. “There is a lot of competition for a few jobs,” he says. “Political parties release their manifestos before elections with claims of generating jobs if voted to power. But every time they fail. With them, we fail too.”

Little Vishal also helps in the family business. He goes into the traffic to sell the small flags. When we ask him why people buy the tricolour, he has no idea. 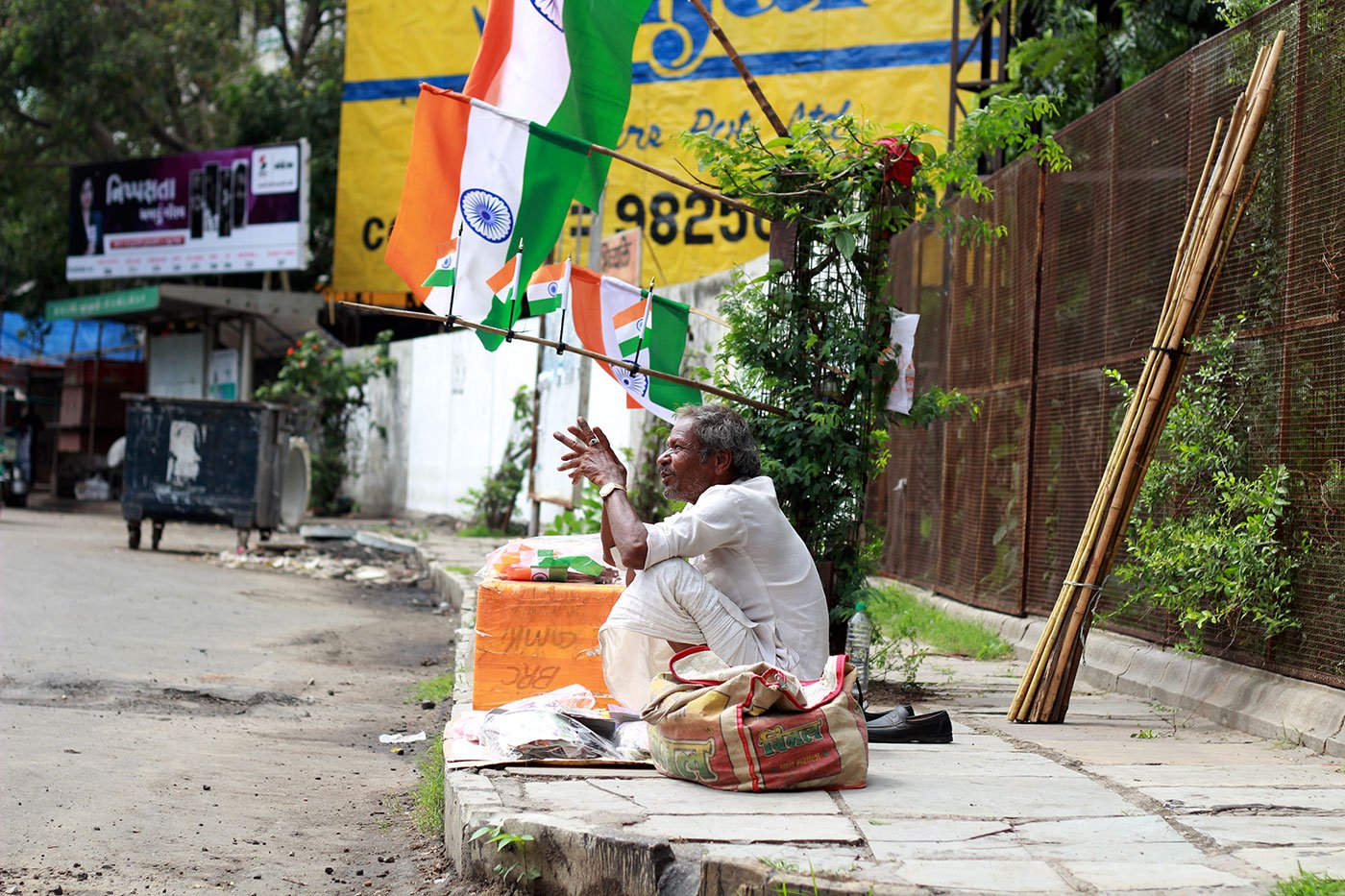 Chiranjilal Bagaria, the oldest flag-seller on these streets, has to plead with customers to not bargain down the modest prices he quotes for the tricolour

Chiranjilal Bagaria, in his 60s, is the oldest flag-seller on these streets; his stall is on Vinoba Bhave Road, not far from Rakesh’s. “We are landless, we just have a hut in Madhopur. What else can I do?” he asks.

Chiranjilal’s eldest son, who was studying at the University of Allahabad, died after an accident. “My hopes diminished,” he says. “And I don’t have anything to rejuvenate them.“ Chiranjilal is a widower; he has three other sons who work as labourers in Sawai Madhopur. “The municipal corporation workers confiscate our wares and sometimes drag us to the police station,” he says. “They return our items after we give some money.”

While we are talking to Chiranjilal, an SUV comes and the occupant starts bargaining. “I am poor, saheb ,” Chiranjilal pleads. “I didn’t tell you a high price .”

After the customer leaves, I ask Chiranjilal: you are here for over 20 years and have seen many governments at the centre and in two states. Yet, your condition appears to be no different? “Yes, all were the same,” he replies. “In reality, only we poor voters suffer. Most of the voters come from the poor or middle classes, but we elect governments for the rich.” Then, looking at the departing SUV, he adds, "We are foothpathwalas . When will we too be able to move on a pucca road?"

Aditya Tripathi and Krishna Khatik assisted in the reporting, and Dhruv Machhi in the photography.