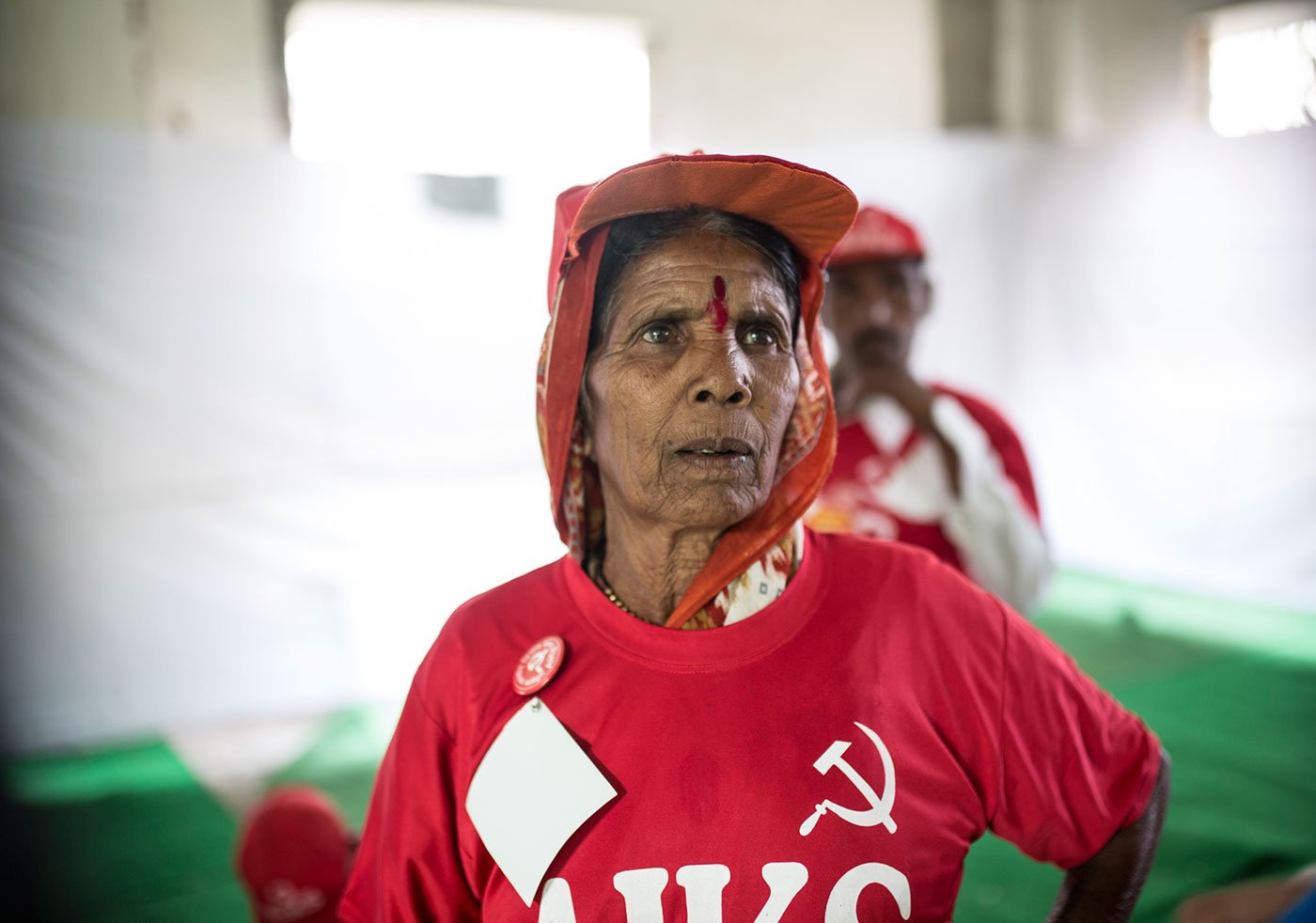 Yesterday, November 29, farmers from Maharashtra – as well as many other states – marched to Delhi’s Ramlila Maidan. Today, they will march towards Parliament to highlight their demands

Yamuna Jadhav does not look like she has barely slept for two nights. She grins, says ‘Lal Salaam’ with a raised hand and a clenched fist, and adds,  “We are looking forward to the next two days.”

She has reached Delhi just six hours ago from Dudgaon village in Maharashtra’s Nashik district. “We took a train from Nashik on the night of November 27,” she says. “We had no reserved berth. We sat near the door throughout the journey. My back is hurting after sitting upright for 24 hours.”

Yamuna ( in the cover photo on top ) is among the tens of thousands of farmers who have arrived in Delhi on a chilly morning on November 29. The All India Kisan Sangharsh Coordination Committee, an umbrella organisation of 150-200 farm groups and unions, has mobilised farmers from across the country to participate in a two-day protest. Today, November 30, the protestors plan to march towards Parliament, demanding a special 21-day session to discuss the agrarian crisis. 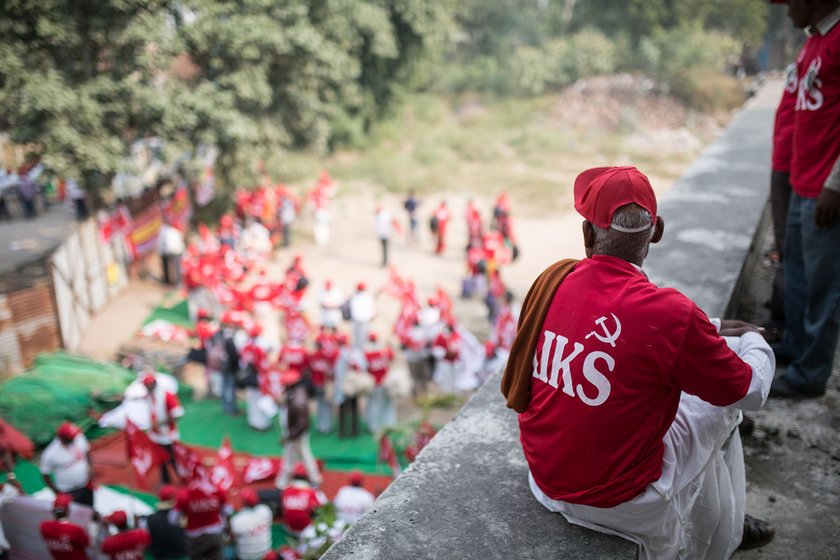 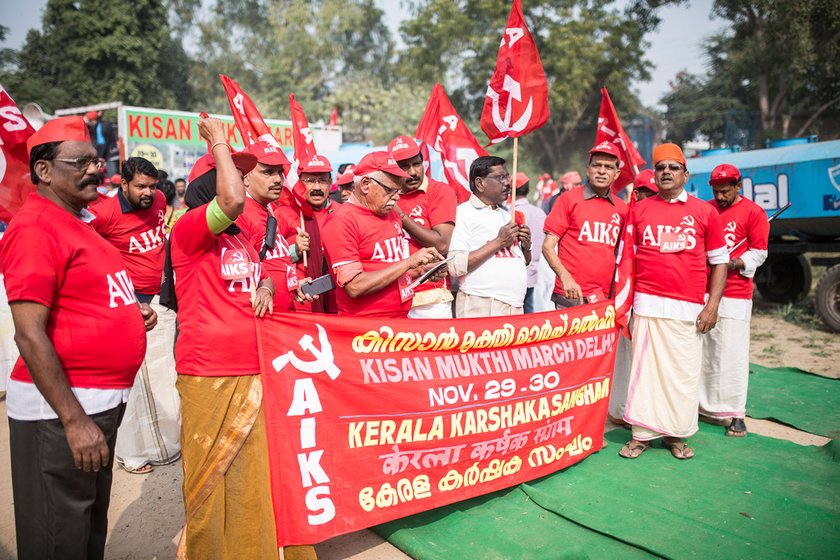 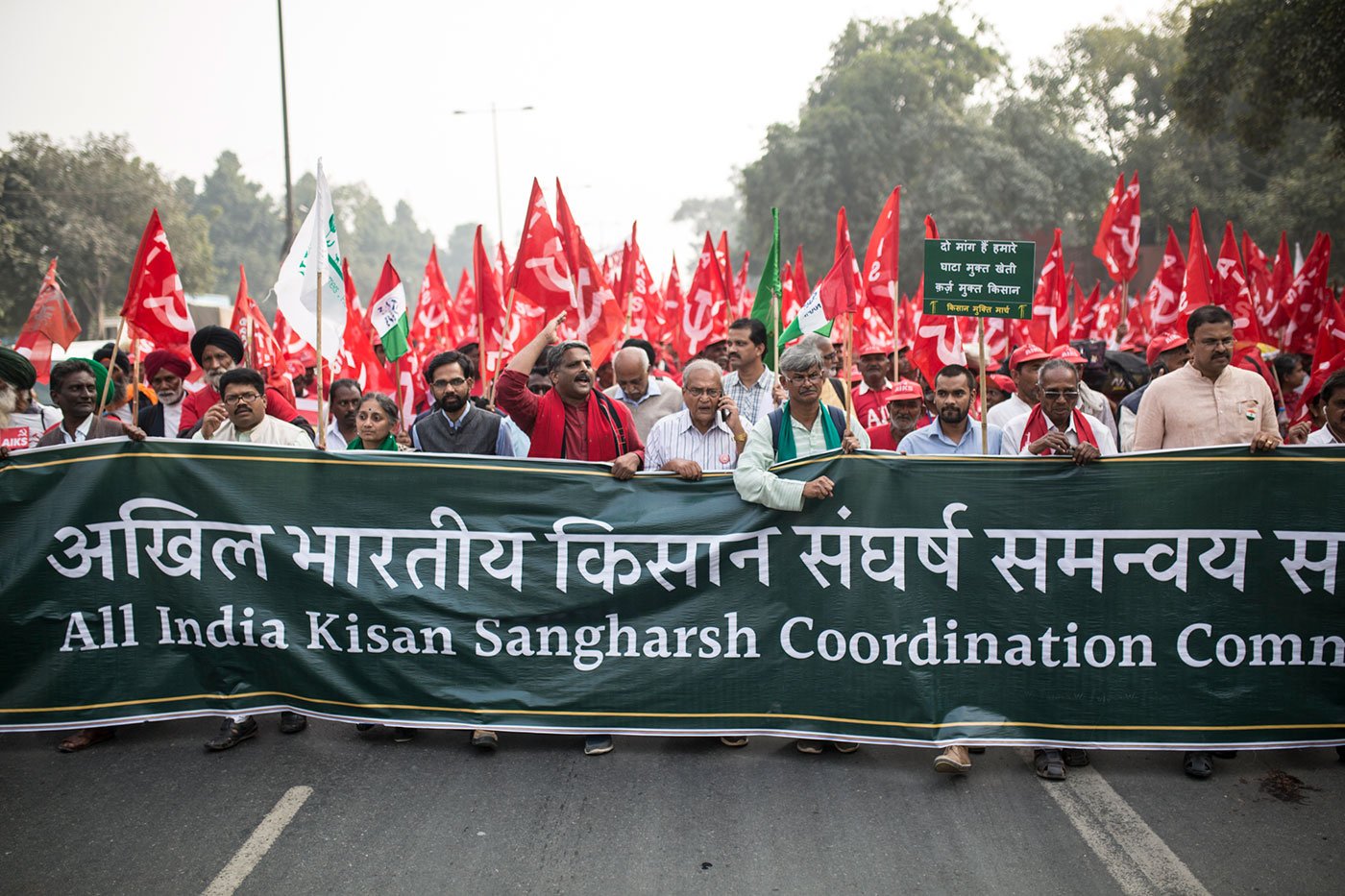 No land titles, water scarcity, an unfair crop insurance policy and loan waivers – these were some of the concerns of a farmers' contingent from Maharashtra

Farmers have come from numerous states, and at least 3,000 are from Maharashtra, says Ajit Navale, farm leader with the Akhil Bharatiya Kisan Sabha. Many of them, like Yamuna, are agricultural labourers earning Rs. 150 as daily wages.

The intensifying agrarian crisis, says Yamuna, directly affects their income. “More the activity on farms, more the opportunities for us to make some money,” she says, wearing a red Kisan Sabha t-shirt. “Currently, Maharashtra is suffering from a serious drought. Farmers are not sowing for the rabi season [after the monsoon]. Where will we find work?”

The Gurudwara Shri Bala Sahibji near Hazrat Nizamuddin station, where many of the farmers rested after arriving in Delhi, has made arrangements for the morning meal of dal and rice, which the farmers are done with by 11 a.m. Tuljabai Bhadange, around 35, from Gangavarhe village in Nashik district, says they had carried bhakri and chutney with them for the first night, but could not eat much on the second. “We have kept 1,000 rupees for the journey,” she says. “We spent 200 on food yesterday. We paid for the rickshaw to reach Nashik station. We have accepted the fact that we will have to give up work [and wages] for five days. This march is a statement. We did it in Mumbai, we will do it again.”

A major concern in the Adivasi belt of Nashik is the absence of enforcement of the Forest Rights Act, 2006, which gives Adivasis rights over land they have long cultivated. Bhadange says tribal farmers are still not owners of the land they have been tilling for decades. “Even though I do not own much land, I work on other farmers' lands,” she says. “If they lose farmlands, where will I work?” 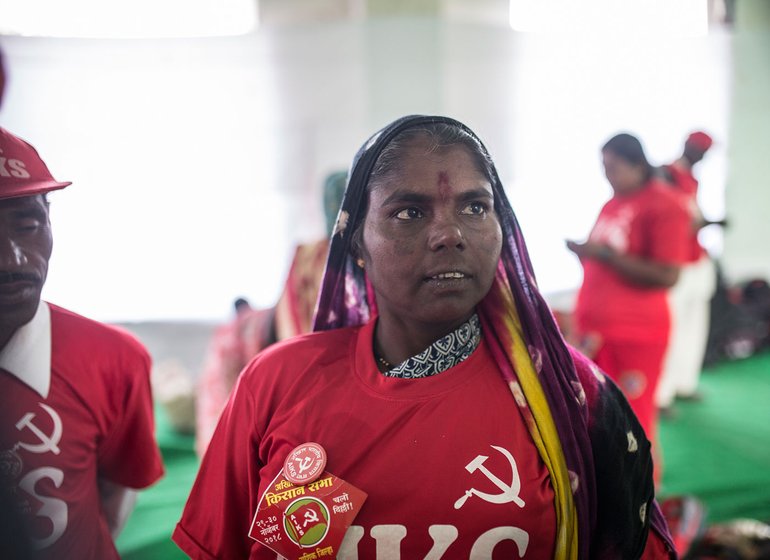 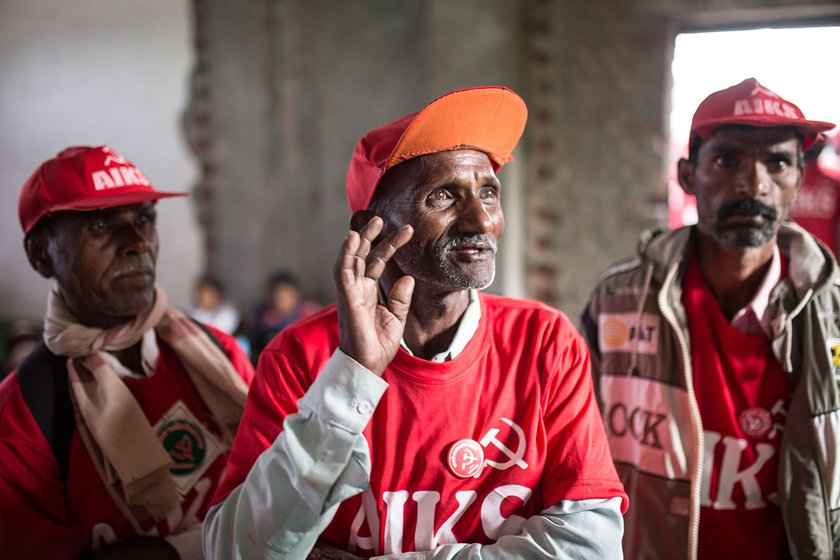 Left: 'This march is a statement,' says Tuljabai Bhadange (left) of Gangavarhe village, Nashik district. Right: 'Nothing has materialised on the ground,” says Devram Bhangre of Ambevangan village, Ahmednagar district

Outside of the Adivasi belt, the farmers and agricultural labourers of Maharashtra who have travelled to Delhi, complain of the lack of irrigation facilities, water scarcity, an unfair crop insurance policy and the need for loan waivers. “Nothing has materialised on the ground,” says Devram Bhangre, 70, from Ahmednagar’s Ambevangan village, as the march moves onto the streets of Delhi by 12:30 in the afternoon. “Farmers rarely receive their crop insurance by the sowing period of June, when they need money the most. If a farmer does not have money, he will cut down on hiring agricultural labourers. Even though our village is suffering from an acute water shortage, there is hardly any assistance. Modi has not fulfilled his promises. He should know we are angry.”

As the farmers flood the streets of Delhi with red flags and t-shirts, chants of ‘ Modi sarkar hosh mein aao ’ reverberate in the air. Bystanders and commuters look on, while the farmers robustly continue shouting slogans.

Disciplined and forceful, the farmers continue to stride towards Ramlila Maidan – nine kilometres from Nizamuddin – close to the heart of Delhi, where the farmers will spend the night. With just one break after about five kilometres, the marchers reach the maidan at 4:30 in the afternoon. 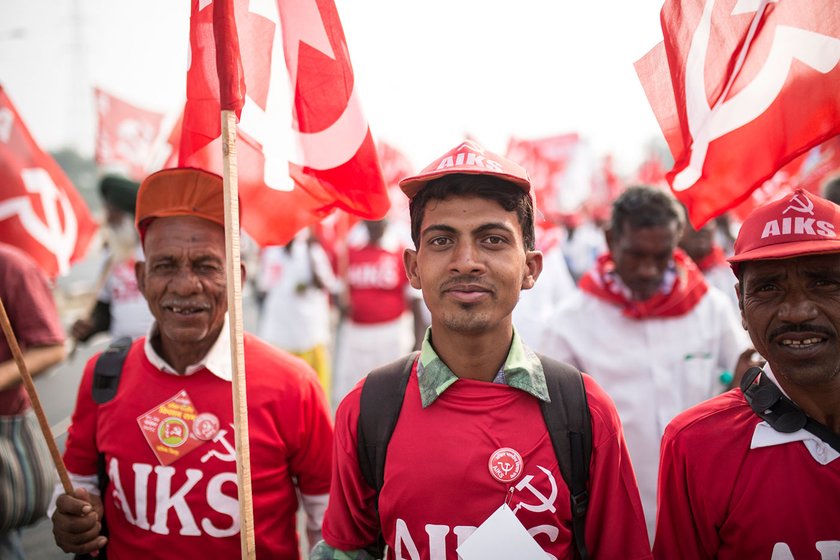 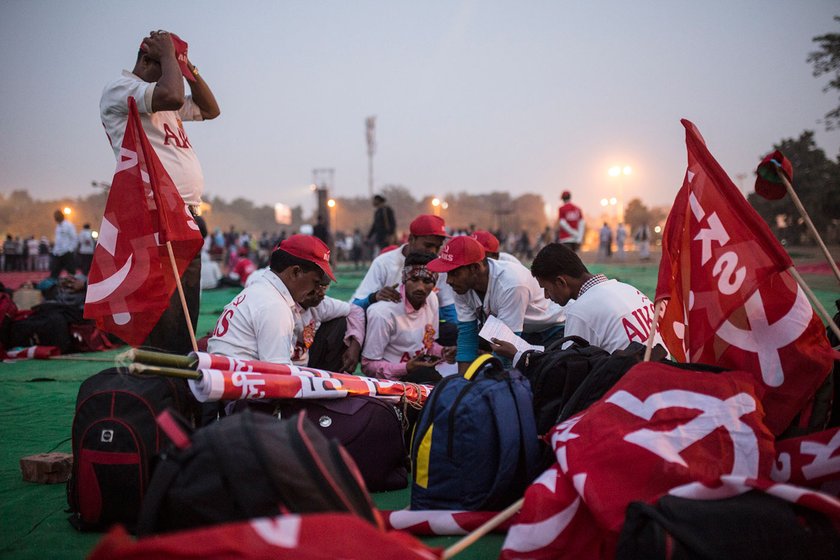 Left: Krishna Khode says, 'My father wanted me to be a police officer. I will strive for that'. Right: Day one draws to a close at Ramlila Maidan

The protesters are from all regions and age groups, men and women both. Krishna Khode, 18, has travelled with others from Pimpalgaon village in Nashik. His father Nivrutti had participated in the Long March in March this year, when farmers of Maharashtra walked for around 180 kilometres from Nashik to Mumbai. “When he came home, he fell sick,” says Krishna, walking with the flag, and backpack on his shoulders. “He complained of chest pains after two or three days. We took him to the doctor, who asked us to get an x-ray done. But even before we could do that, he died.”

Krishna’s mother Sonabai has since been doubling up as an agricultural labourer, besides looking after the farm. Krishna wants to become a police officer. “I do not want to be a farmer,” he says. “My father wanted me to be a police officer. I will strive for that.”

Did Sonabai object to her son participating in the march after what happened to Nivrutti? He smiles. “She asked me why I would like to go,” he says. “I said I want to be a part of it. All she said was: ‘take care of yourself’.”

R. R. Thamizhkanal is a Chennai-based independent journalist and a translator focussing on issues related to public policies.

Other stories by R. R. Thamizhkanal