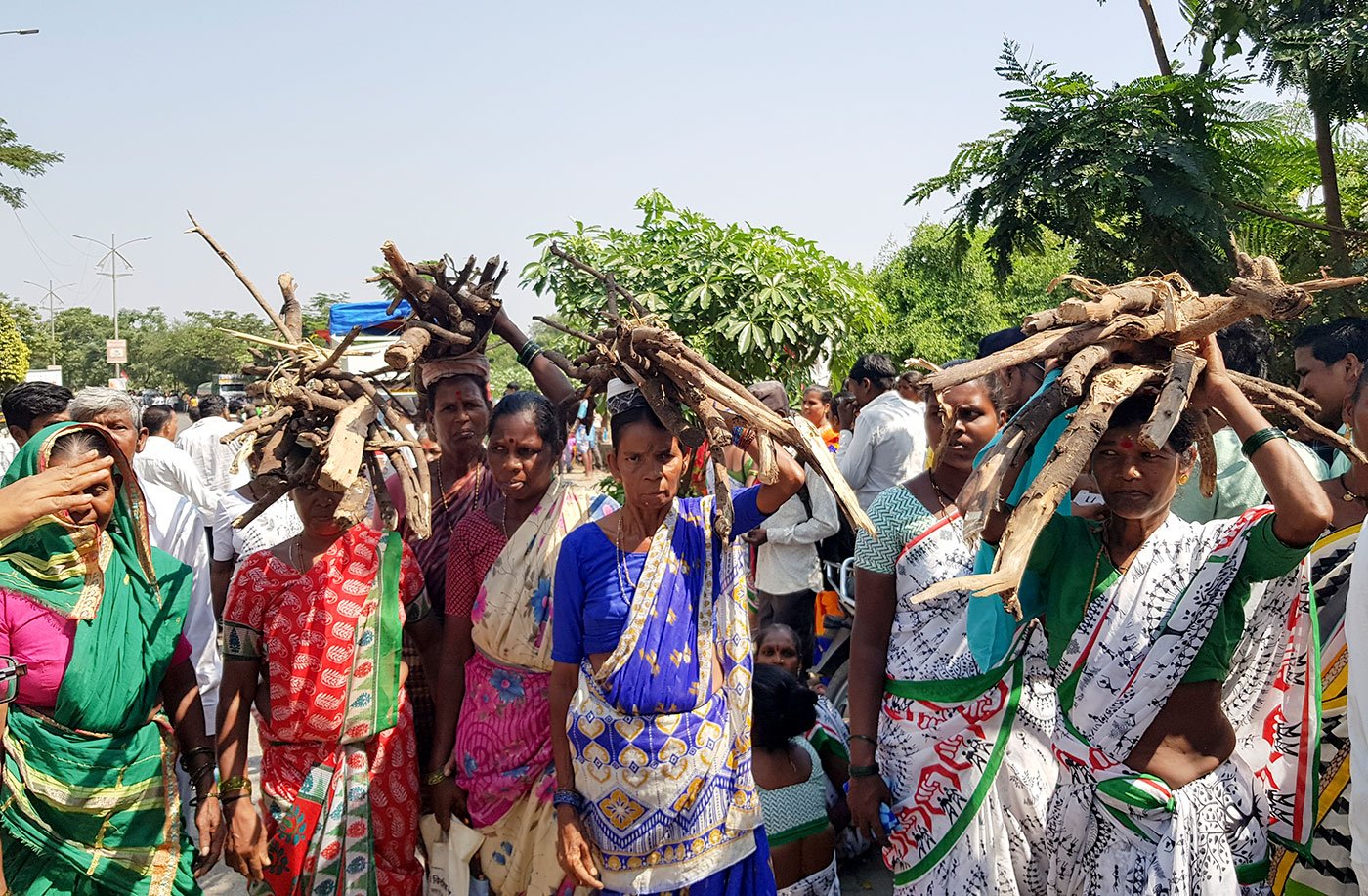 ‘We won't leave until all our demands are met’

In another instance of growing anger, on October 30, tens of thousands of Adivasis from Maharashtra gathered in Thane, demanding land rights, employment, food security, and other long-pending measures

The sun had set. Darkness was spreading fast. With firewood on their heads and utensils, bricks, uncooked rice, dry fish and spices in hand, many thousands of Adivasis – 50,000 estimate the organisers – walked towards the old octroi post in Mulund in north-eastern Mumbai. This now-defunct compound became the camping ground for the protesters.

“We will settle here. We have brought along all the things we need. Firewood for the stove, vessels to cook in, rice – we have got it all,” said Manubai Gawari as she adjusted the load of firewood on her head. “We will not leave until all our demands are met.” Manubai, 60, is from the Warli community and lives in Dighashi village in Bhiwandi taluka; she came for the morcha along with 70-80 others from her village.

Since 11 a.m.on Thursday, October 30, groups of Adivasis – from the Warli, Katkari, Mahadev Koli, Ma Thakur and other communities – poured into Thane city from  Nashik, Palghar Raigad, Thane and Mumbai districts. They came in groups by hired tempos, by bus, by train. Around noon, the tide of women and men marched towards the collector’s office in Thane city from Saket Naka, two kilometres away. Among them were farm labourers, porters, sanitation workers and construction labourers. 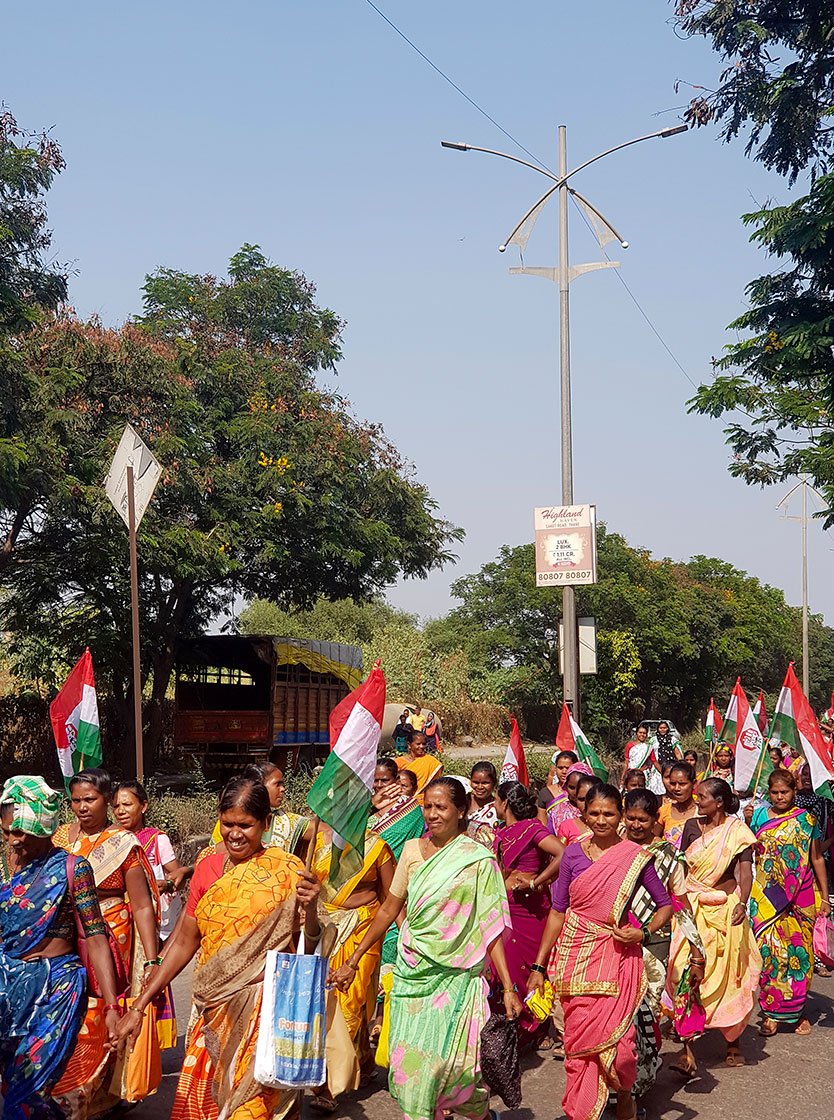 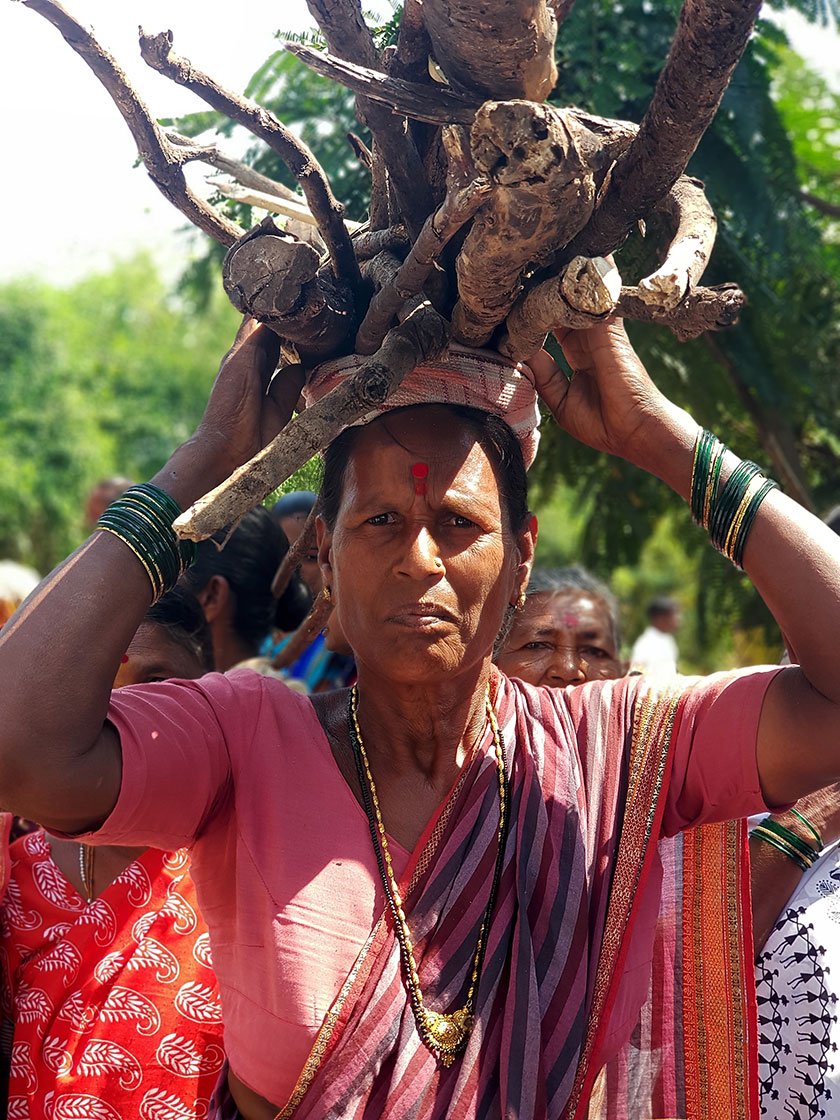 Left: Marching towards the collector's office in Thane. Right: Manubai Gawari, from the Warli Adivasi community, came from Dighashi village

“Our Adivasi families have been residing in the forests in and around Mumbai for many generations. We don’t have any proof of ownership [of land or house]. We don’t have caste certificates. My mother gave birth to me at home, that is not registered anywhere. I am 52. My children need a caste certificate for their education. That means proof of 50 years of life. Where will I get that from?” asked a distraught Nalini Bujad at the rally outside the collectorate. She’s from the Warli community, and has come here from Amboli in Andheri, a north-western suburb of Mumbai.

“The padas around Mahanand Dairy [hamlets in Goregaon in north-western Mumbai] don’t have electricity or water. Give us caste certificates, include our padas in the development plans. Rehabilitate us in the same area,” she continued. Close to 2,000 Adivasis from 10 tribal padas in Mumbai participated in the march, estimates Nalini Bujad, a representative of the Shramajeevi Sanghatana.

The march was organised by the Sanghatana to highlight long-standing issues of Adivasis in the state. The organisation is headquartered in Vasai in Maharashtra, and works on Adivasi rights. Many times before this, the same communities have taken to the streets in protest. Each time, the government placates the protesters with assurances and sends them back. So this time, the Adivasis resolved not to back off. 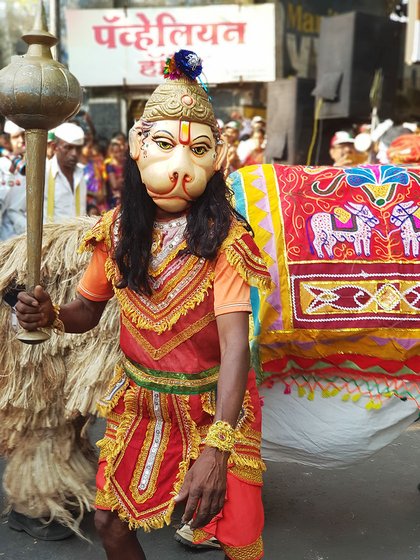 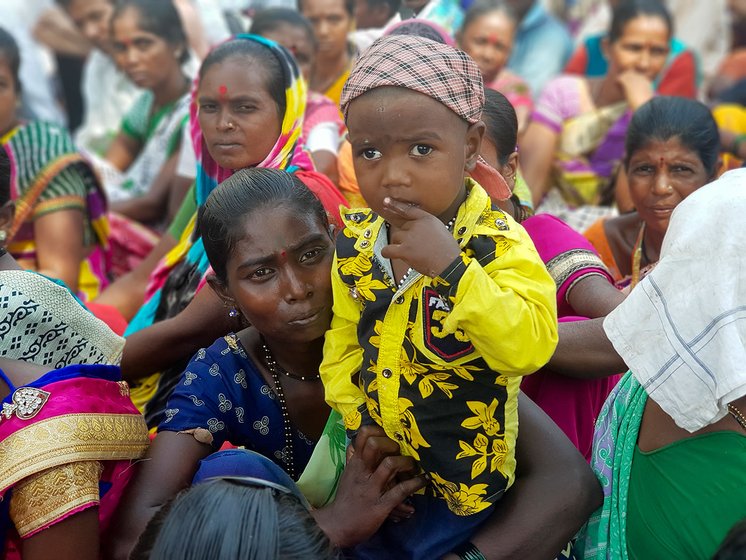 Left: The rally was also a time for performances that spoke of Adivasi cultural identity. Right: At the collector's office, a Katkari Adivasi woman with her child

By 5 p.m., the morcha turned towards Mulund. The protesters walked the five kilometres from Saket Naka to Mulund’s  Jakat Naka (the old octroi post). It had started to get dark. There was no electricity at the camp ground. “If you don’t provide for electricity here, we’ll camp on the highway under the lights there.” This demand from the people in unison forced the cops there to take some action. In a short while, the light bulbs on the electricity poles lit up.

People from each village chose a spot and brought their firewood, bricks, pots, utensils, grains and provisions there to set up a makeshift basti. The darkness around them slowly diffused in the light of the cooking fires. There were at least 500 such fires burning at the open ground.

After dinner, the people played drums and sang their songs. Many stayed up all night. Others were exhausted from the day’s walk and from carrying the load of firewood and bricks and spread out small sheets of cloth on the ground to rest for the night. Many used their bundles of belongings as pillows and fell asleep under the open sky. 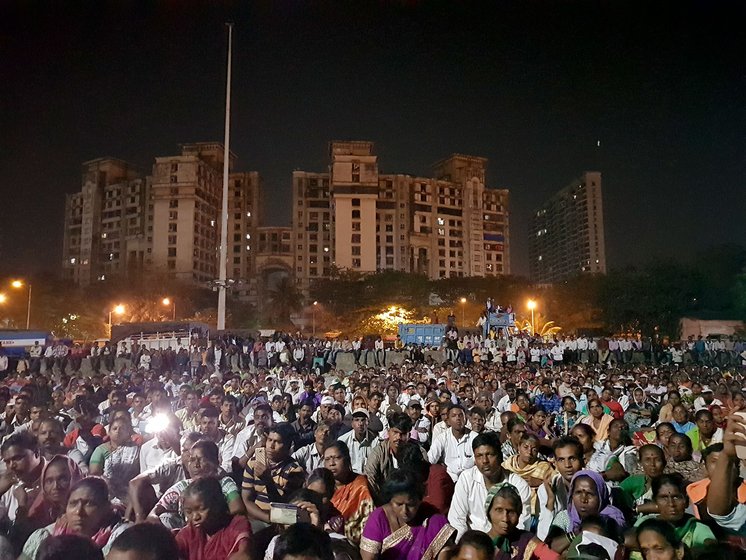 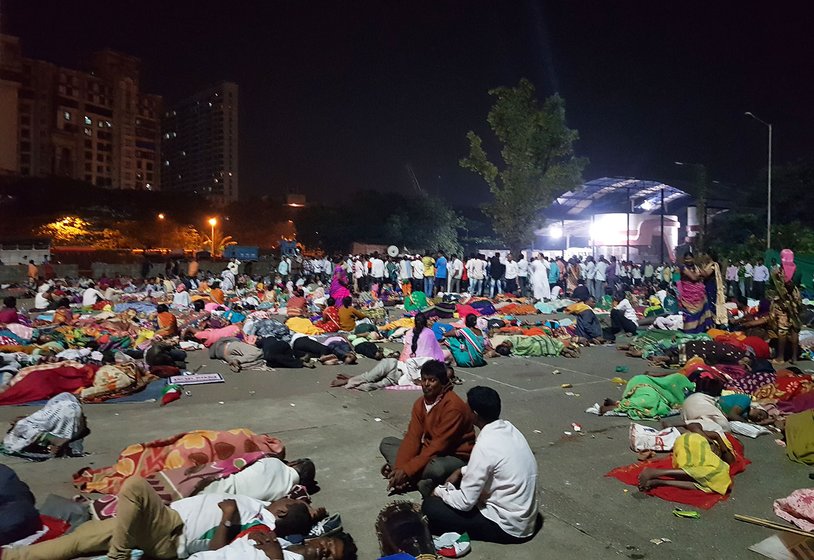 The protesters camped at the Jakat Naka in Mulund for the night, waiting for their representatives to return from a late night meeting with the chief minister

One of the main demands of the protesters was the implementation of the Forest Rights Act was of 2006. Even 12 years after the Act was passed, Adivasi communities across India have not received rights to the forest land they have cultivated for generations. Another major demand was that before the ambitious Direct Benefit Transfer policy of the central government (introduced in January 2013) to transfer monetary amount in various welfare schemes is set in motion, internet connections must be made available in every village. The protesters also asked for employment opportunities for Adivasis; they demanded that the needs of Adivasi communities in Mumbai should be included in the development plans; and that solutions should be found to eradicate the increasing levels of hunger among Adivasis.

The protesters waited all night in the open ground for Chief Minister Devendra Fadnavis to respond. At midnight – 12 hours after starting out for the collector’s office in the relentless heat – 10 representatives of the Adivasi groups from various districts met the chief minister at his official residence in south Mumbai. They were given a guarantee that what they were demanding would be implemented. The chief minister would also give orders to various department heads, including the forest department, to resolve the issues and would appoint a nodal officer to follow up and steer the process.

At 3 a.m., the representatives returned to Jakat Naka. The waiting protesters at the ground expressed happiness at the outcome of the meeting. By 5 a.m., they started returning to their villages – with hope.

Translated from Marathi by Samyukta Shastri, with inputs from Jyoti Shinoli.