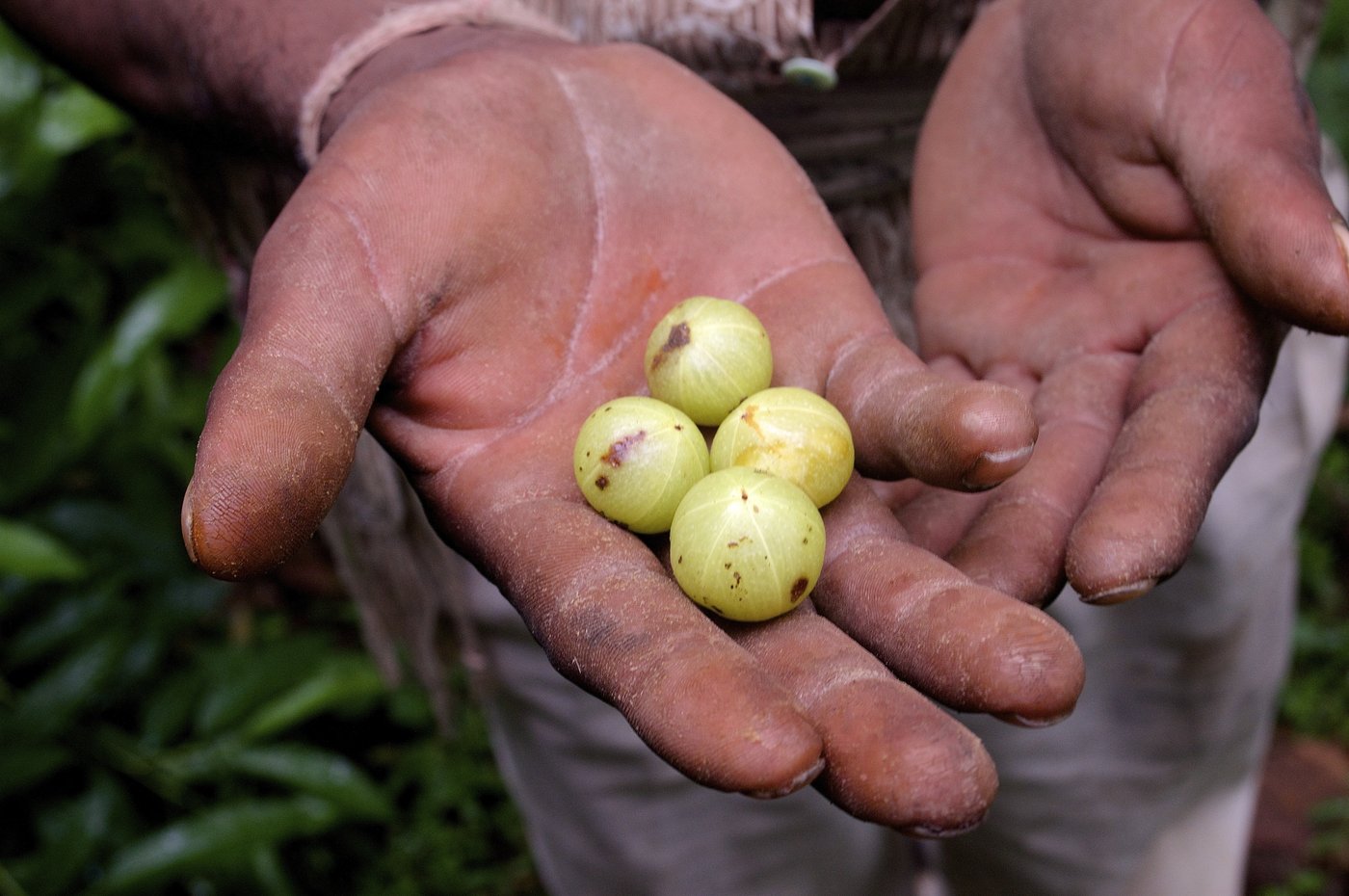 Now you eat it, now you don't

“The jungle is god’s gift. There are no owners or boundaries but several caretakers,” Nagji Pisara proclaims. Nagji lives in Panarwa, a small village outside of Udaipur, Rajasthan, nestled in the foothills of the Aravalli mountains. Most of the population farms and maintains livestock, but people still forage to supplement their kitchens or medicine cabinets. Surrounded by green forests, Panarwa is home to several tribal communities, each of them with their own understanding and use of the forests.

The forest department has  built boundary walls to limit animal grazing and restrict movement in the now-protected sanctuary called Phulwari ki Nal. Many species of animals and dozens of indigenous plants and trees can be found here.  India’s plants produce food, oil, dyes, energy, medicines – and more. With each of these items now a commodity, ideas of forests and ownership get complicated. Foraging is banned inside the forest. However, there are communities and organisations fighting for Adivasi access rights.

Dr. Leena Gupta, an expert on jungle foods, says that plants contribute to national food security.   “Despite their nutritional, medicinal, and socio-economical value, wild foods are excluded from official statistics on natural resources. Our conventional agriculture system provides food, but not nutrition. It’s all chemical-based farming  –  and so it’s chemical food. Wild foods give us dietary diversity. Most of the world eats three crops: wheat, rice and maize. Our local governments and non-profits have played a big part in switching forestlands to mono-cultivation. 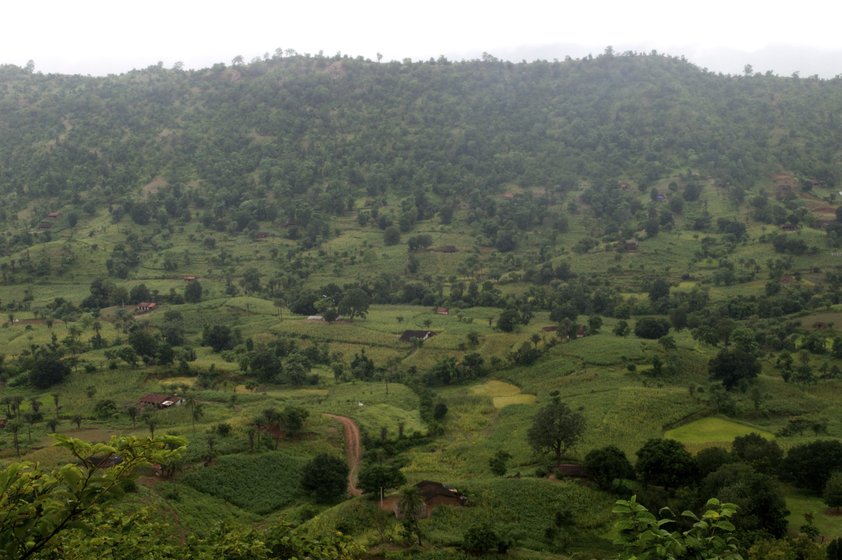 Left: A view of Panarwa. Right: Locally known as ‘goda’, this nutritious root is boiled in hot water until the skin falls off, and the inside is eaten

“The new generation of tribal communities has changed. Traditional knowledge is being forgotten. They don’t allow plants time to regrow. They think the food urban people eat is better; they don’t want to be known as ‘wild’.”

Joining community members foraging in three different locations was a learning experience. It became clear that each tribe has a different approach to, and opinion on, the forests. Each has a special location where they feel the biodiversity is still alive. All of them could easily identify dozens of species. For every trip, we went by car, a subtle sign that the local biodiversity was waning; if any of these communities had to reach these places on foot, it would take them a couple hours.

The Kathodi tribe still forages for income, but loss of access to the forests means they work more as manual labourers today. Their tribe is not native to Rajasthan. They were brought in from Maharashtra by the king of Udaipur over 70 years ago to find catechu, an extract from the acacia tree. Unlike the Kathodis, who are among the disenfranchised, the Garasiya tribe is one of the stronger communities. Many of the Garasiyas own small plots of farmland.  Some are trying to cultivate forest seeds on their lands in an attempt to save valuable species and decrease visits to the woods. 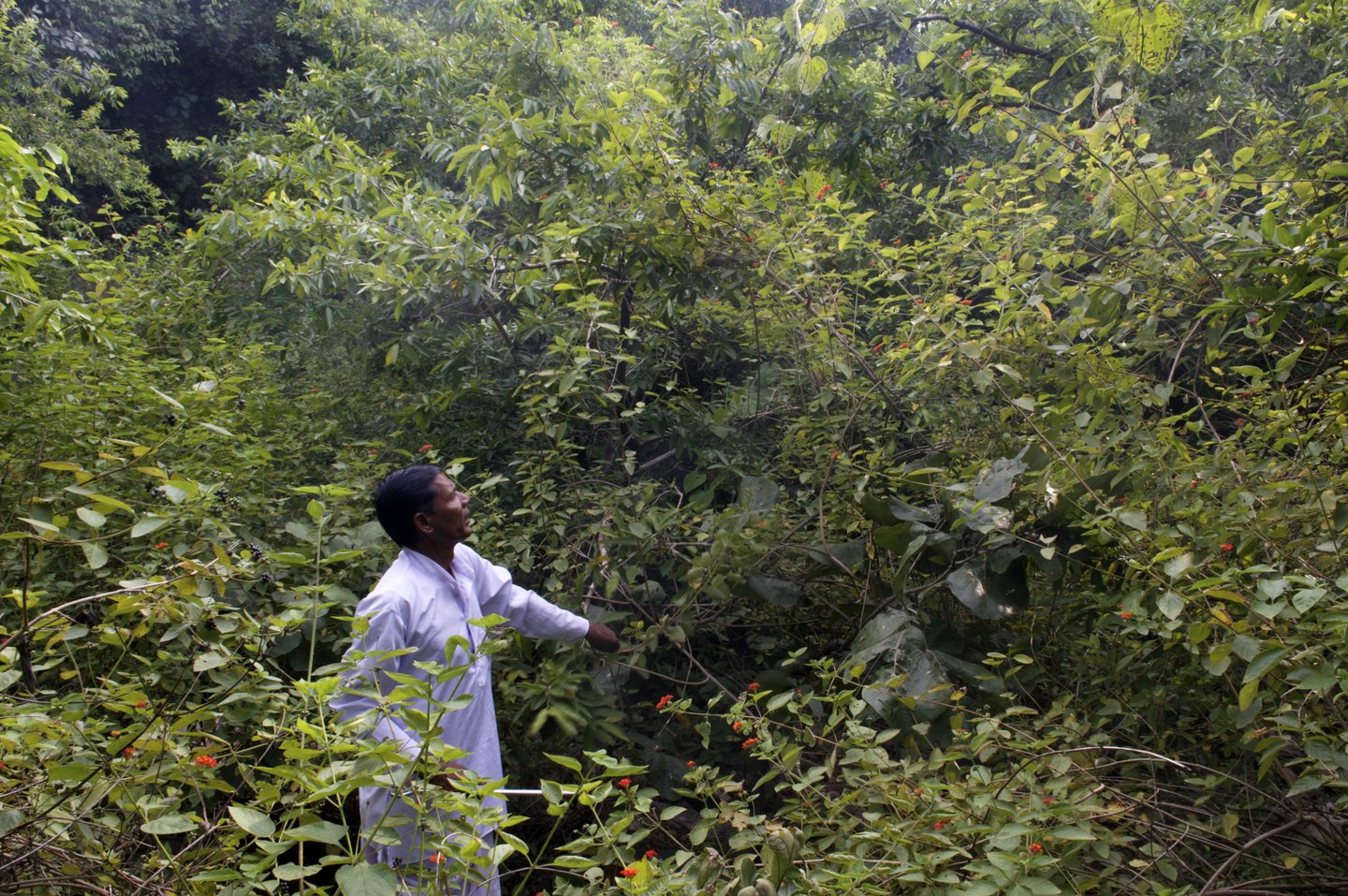 Nagji searching for fruits in the forests of Panarwa

With Nagji Pisara and his sister, Keslibai, both Garasiya, I went to the village of Mandava, about five kilometres from Panarwa where they felt the biodiversity is greater. Keslibai owns a small shop in Panarwa and Nagji is a landowner and farmer. Nagji tries to be optimistic about the current state of the forest, but admits that some plants are harder to find.  “Now, foraging is done for festivals, or for easy things like fruit. It’s only firewood that is collected every few days.” 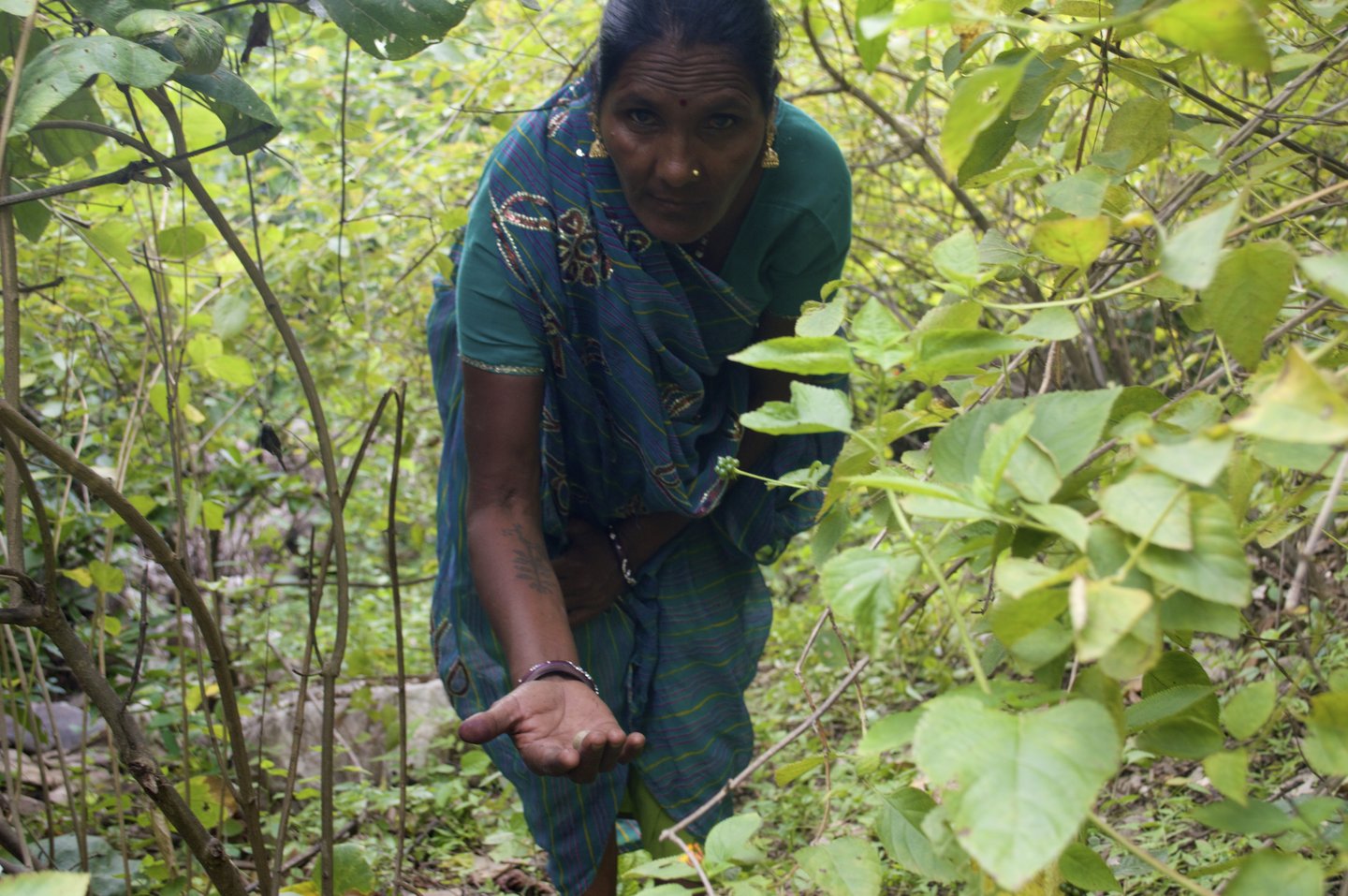 Keslibai holds up a fruit she has dug up

“It takes time to dig up, prepare and cook these plants and roots,” says Keslibai. But she believes that this nutritional and medicinal value is important for pregnant women and young children. 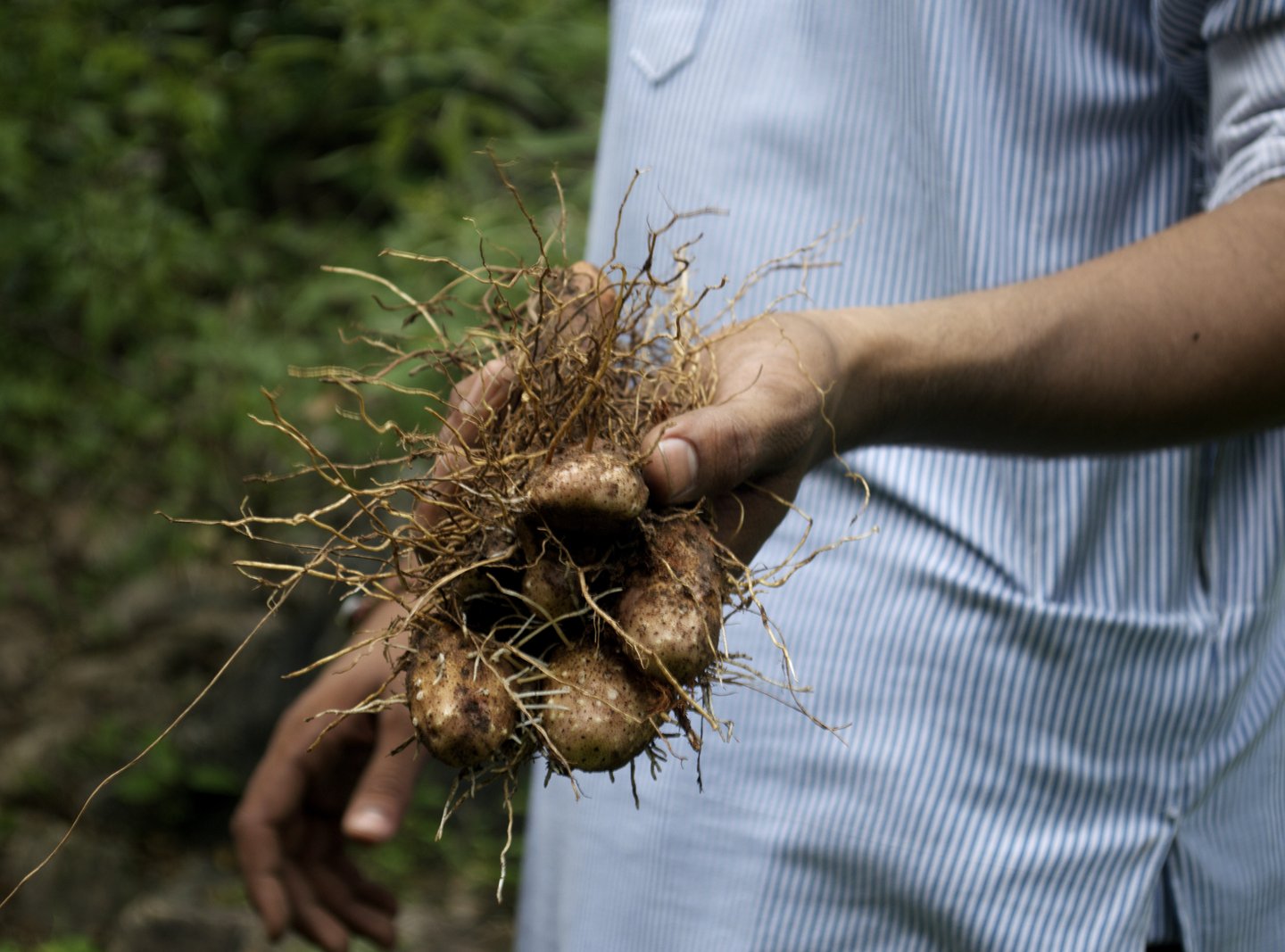 Ratanlal and Punaram Dagacha grew up in the forests. Both are farmers of the Garasiya tribe but not blood relations. They still forage, but are focused more on cultivation. Punaram plays an active role in local politics and is also a traditional healer, using many of the plants in the forests for medicine. We went to Katavali jher, or stream, a location where they believe biodiversity is still strong. 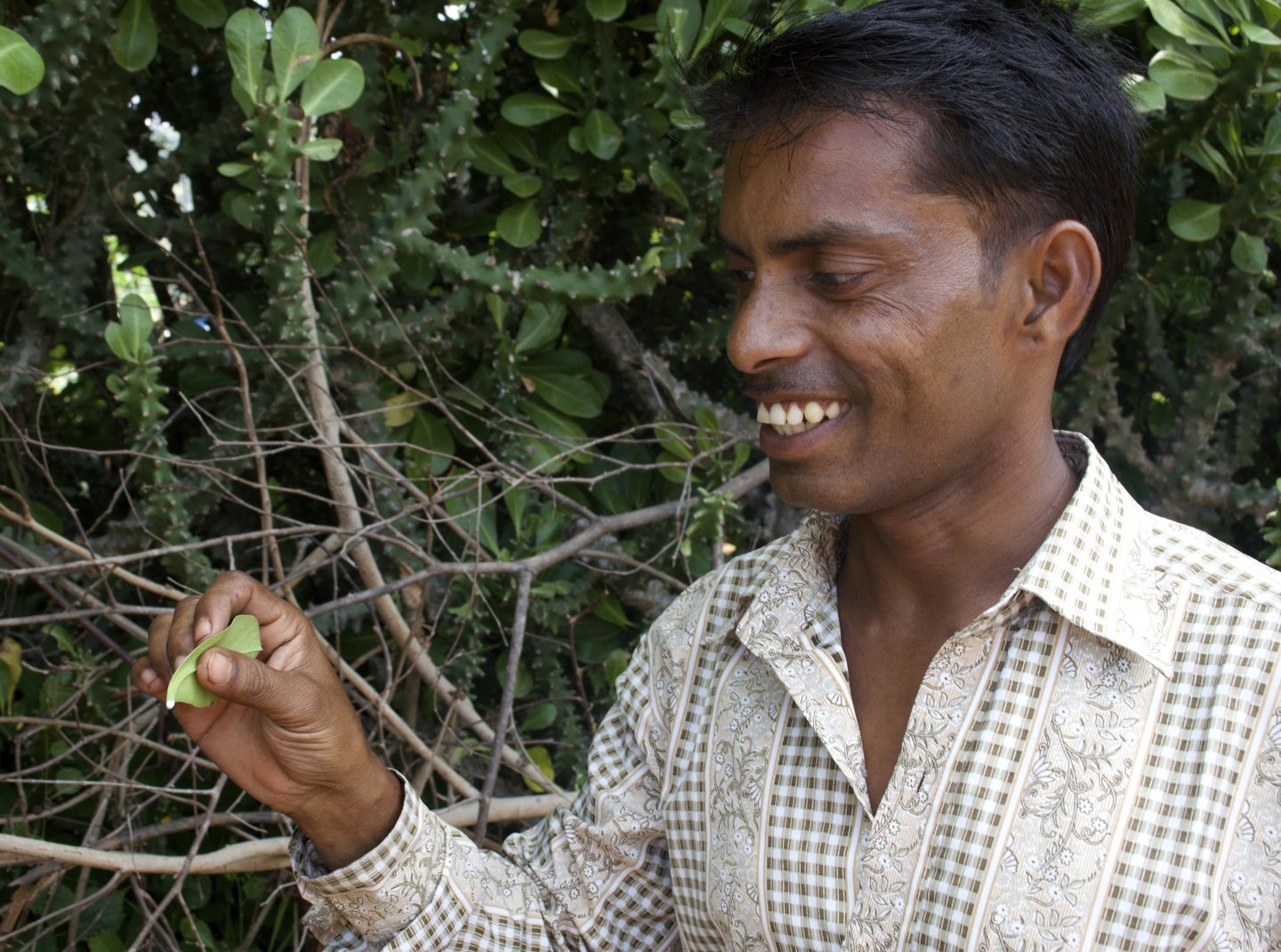 Ratanlal shows us a leaf of a cactus or ‘thor ke patte’ , which is used as food and medicine

“I remember eating more from the jungle,” says Ratanlal. “Now, people living in Panarwa have stopped respecting the forests. People just take whatever they want, when they want, to sell for money. Now something like safed musli [a medicinal herb] is vanishing because people wouldn’t give it enough time to grow back. We don’t have much biodiversity left around our homes, we have to come here to find what we need.” 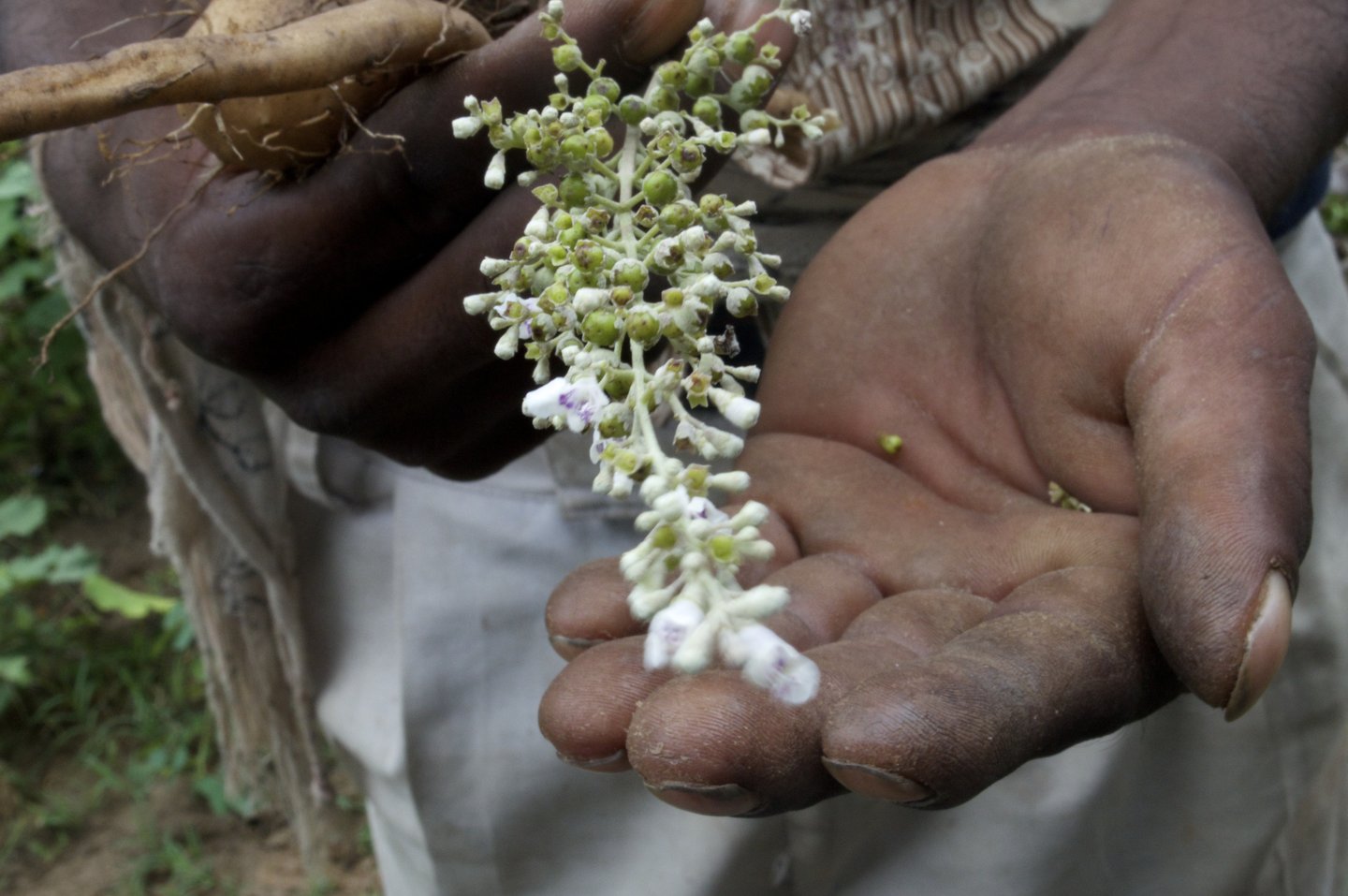 Both spoke about people who occupy what is meant to be common grazing land and are not averse to the forest department kicking out them out. Ratanlal explains the subtleties in tribal ownership and forest politics. “While no one would stop another person from going anywhere in the forest, there are sections of the jungle that are commonly known to be associated with only one group. It can even get specific enough that certain people will own certain trees. They say ‘this tree has been in my family for decades, so we own the fruits that come with it’.” Some tribes also enjoy more privileges with the forest department, being allowed to take small quantities of produce without being harassed. 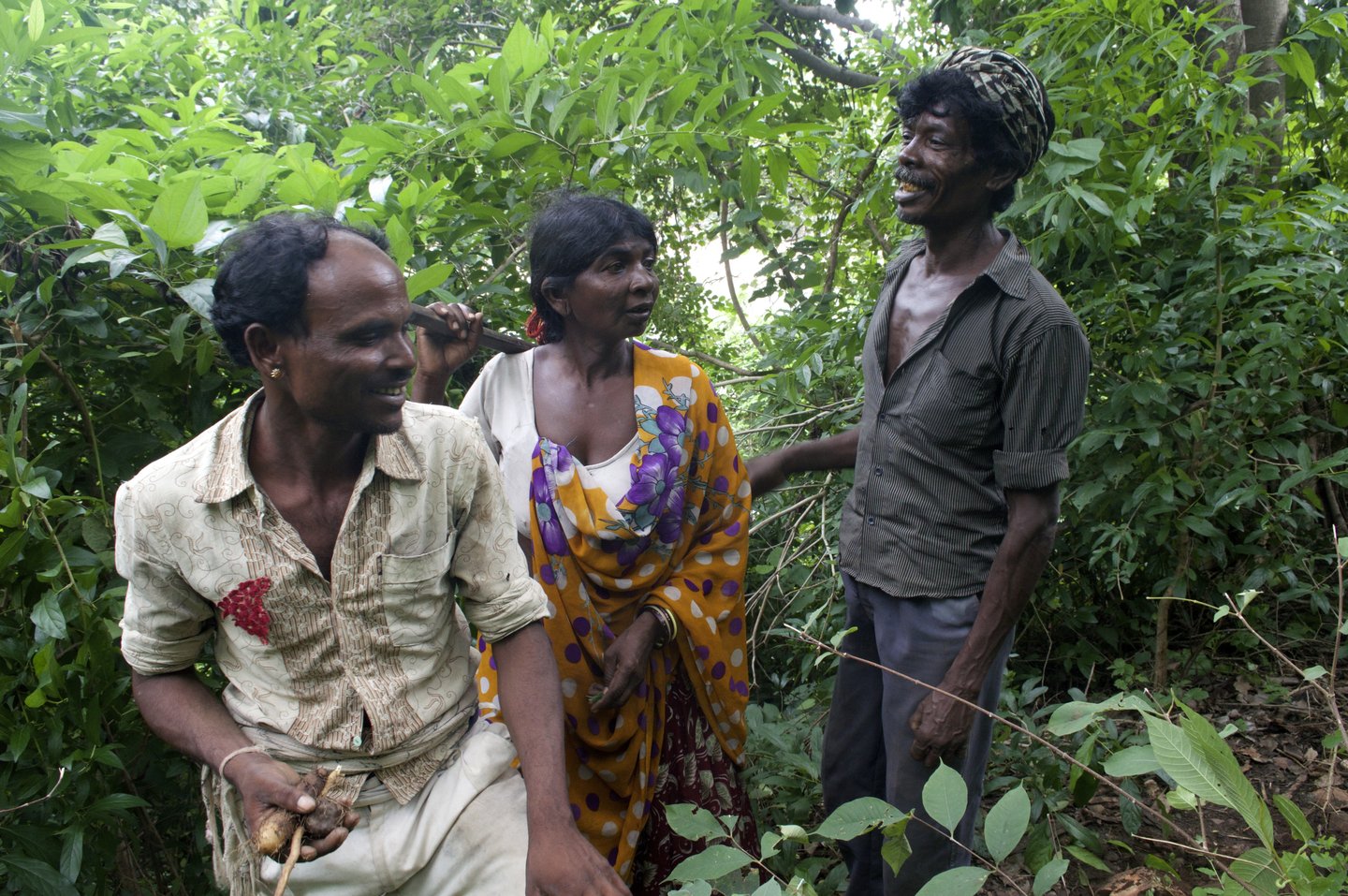 “Since we get paid by the kilogram,” says Mohan, “it can take us about 15 days to collect enough to sell. It’s exhausting work because we have to go very deep into the forest. ” The Kathodis resent the hurdles they face. “We have to pay the forest officials before we can go out and sell what we gathered.” Over time, he says,  “we begin to forget locations of some plants as we get to move about less and less, thanks to their limiting our movement.” 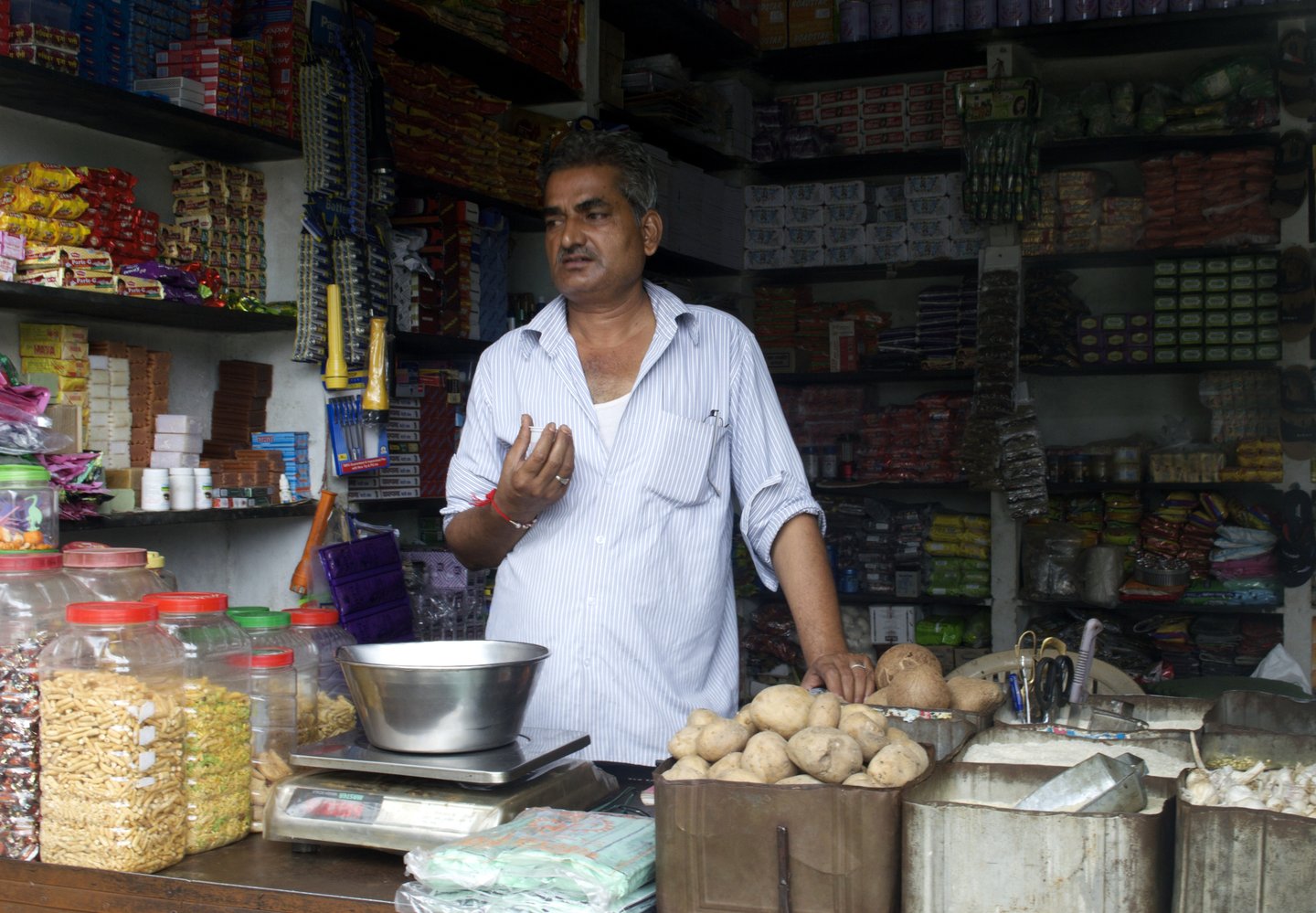 Ashok Jain in his general store

“Their livelihoods of the Kathodis, so dependent on the jungle, have dwindled,” says Ashok Jain, owner of a general store in Panarwa, who does regular business with the Kathodis. He buys their goods to process and resell at a minimum 10 per cent mark up. “They forage for about eight months in a year, but supplies have shrunk. People in urban areas want jungle medicines and food, but they don’t realise how long it takes to find them, dry them, process and pack them. The Kathodis do work hard, and we pay a fair price, but only when the merchandise is of good quality. Musli that is collected from the jungle fetches a better rate than that grown on a farm.” 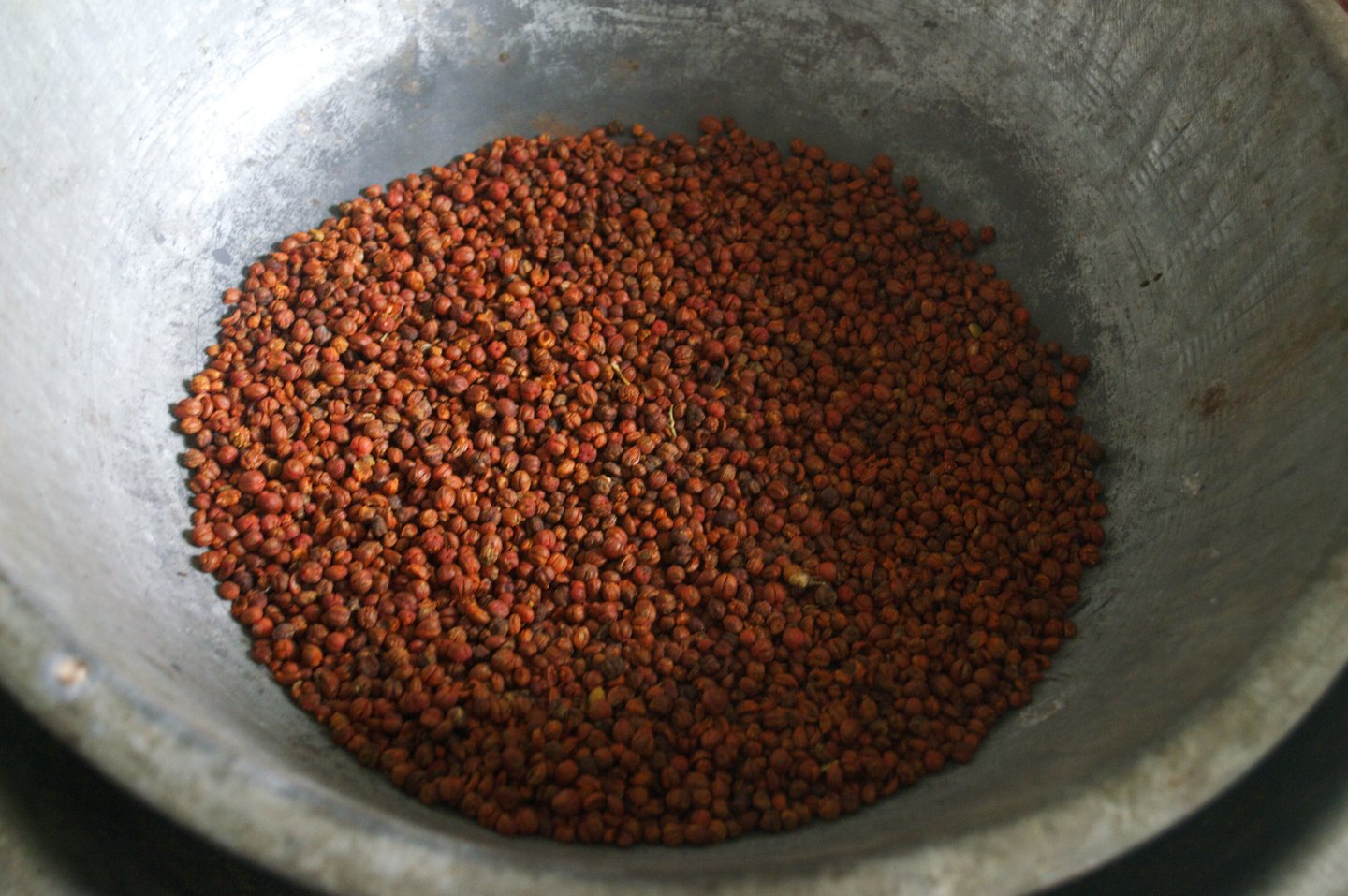 ‘Mala’, a red seed used in medicinal oils, is difficult to amass

Ultimately, says Dr. Leena Gupta, forests can provide solutions for many of our food security problems. “We need to restore our jungles first, and then ecosystems can rebuild. Local communities still use many wild plants and we need to preserve this knowledge. Large-scale promotion of wild edibles would help better their lives. It can also reduce the burden of monocultures." 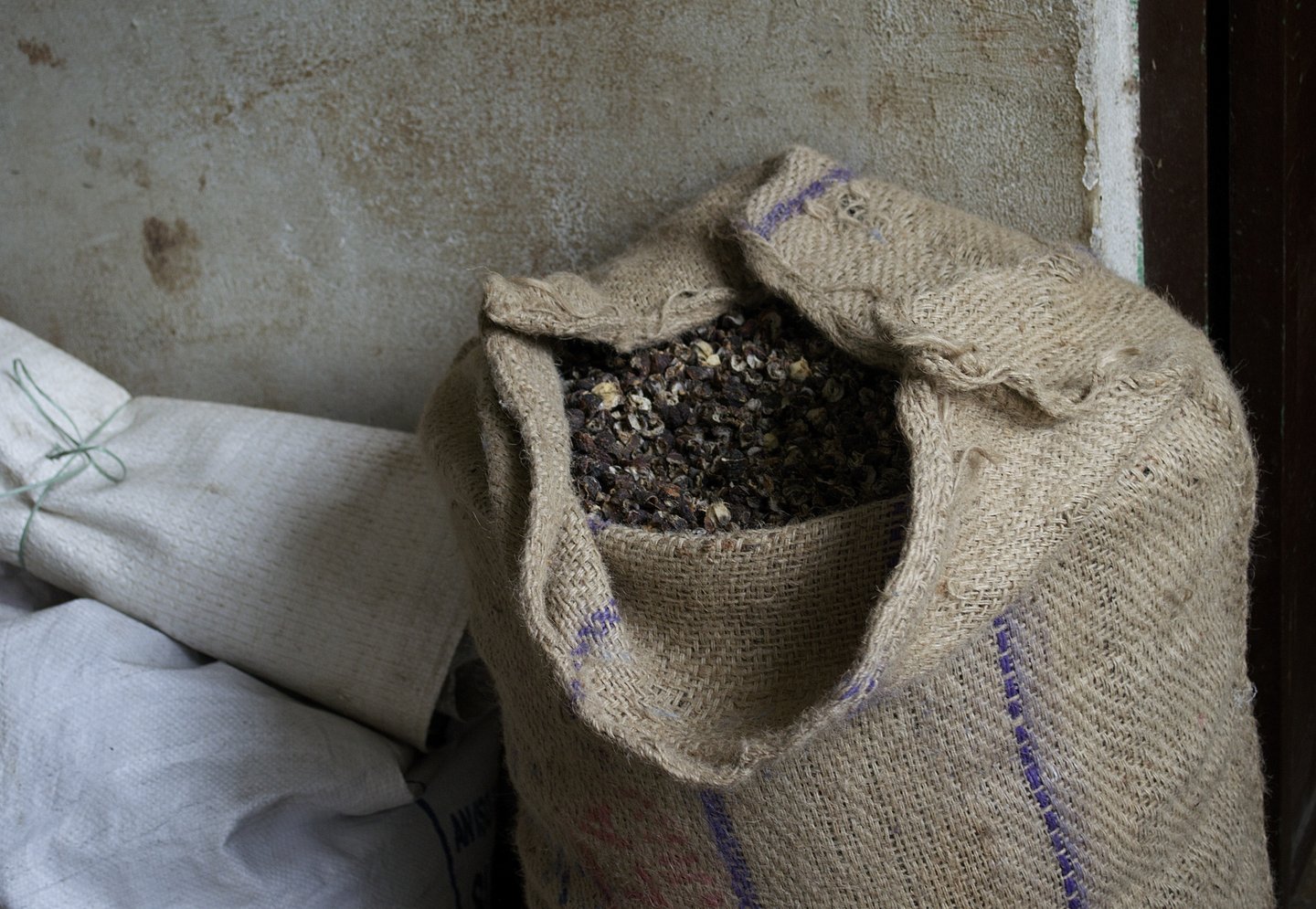 But, she says sadly, "this is not new. Our governments know all this. And I don’t know why they have done nothing about it. While they might be doing things on a small scale, the devastation is vast and needs policy level changes.”


A special thank you to Rohit Jain, founder of Banyan Roots, an organic store and farmer's collective, for his help in doing this story; and thanks also to the community members of Panarwa.