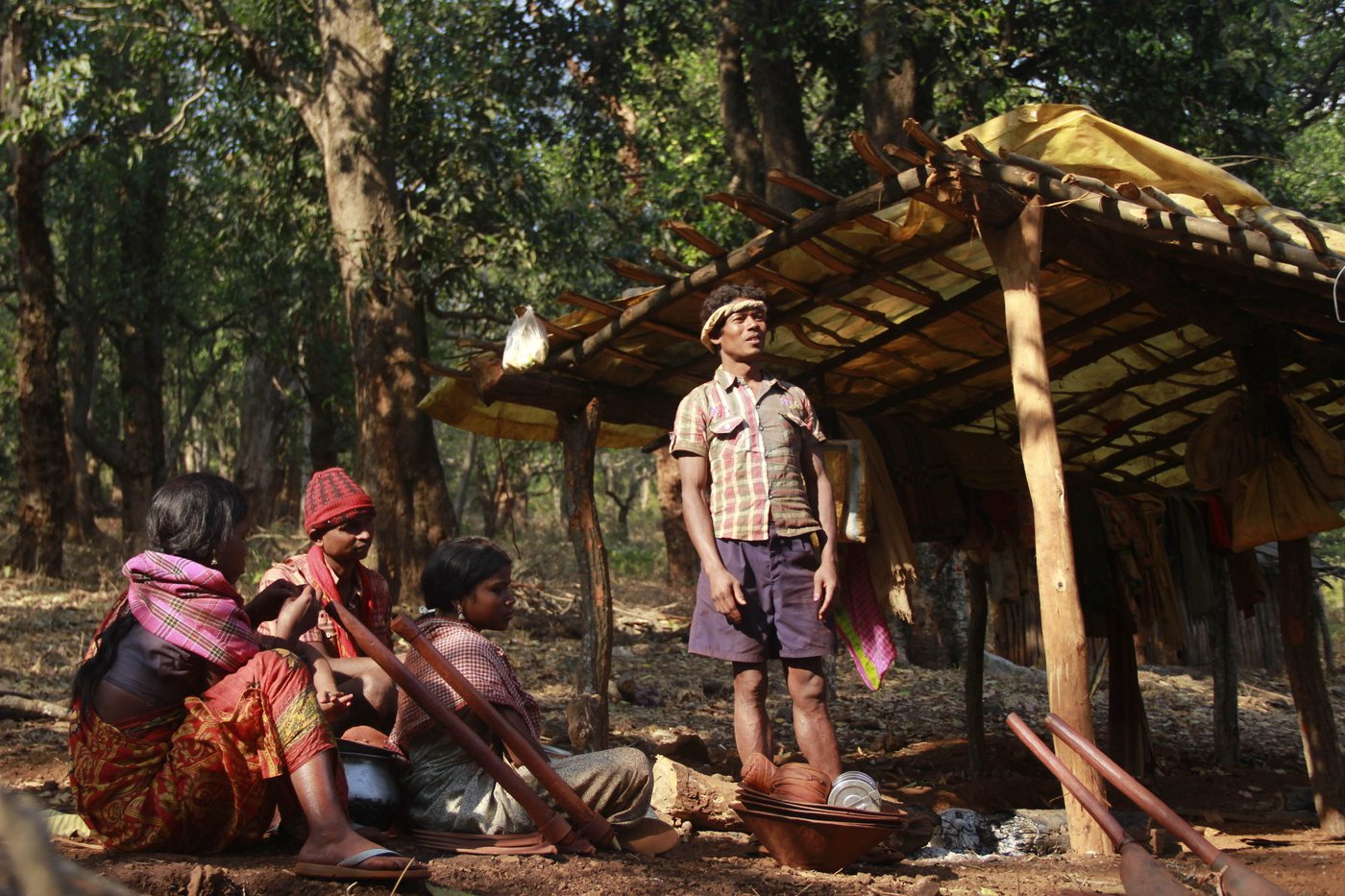 Rampant mining for over a decade is altering north Orissa’s Bonai forests, and spurring protests 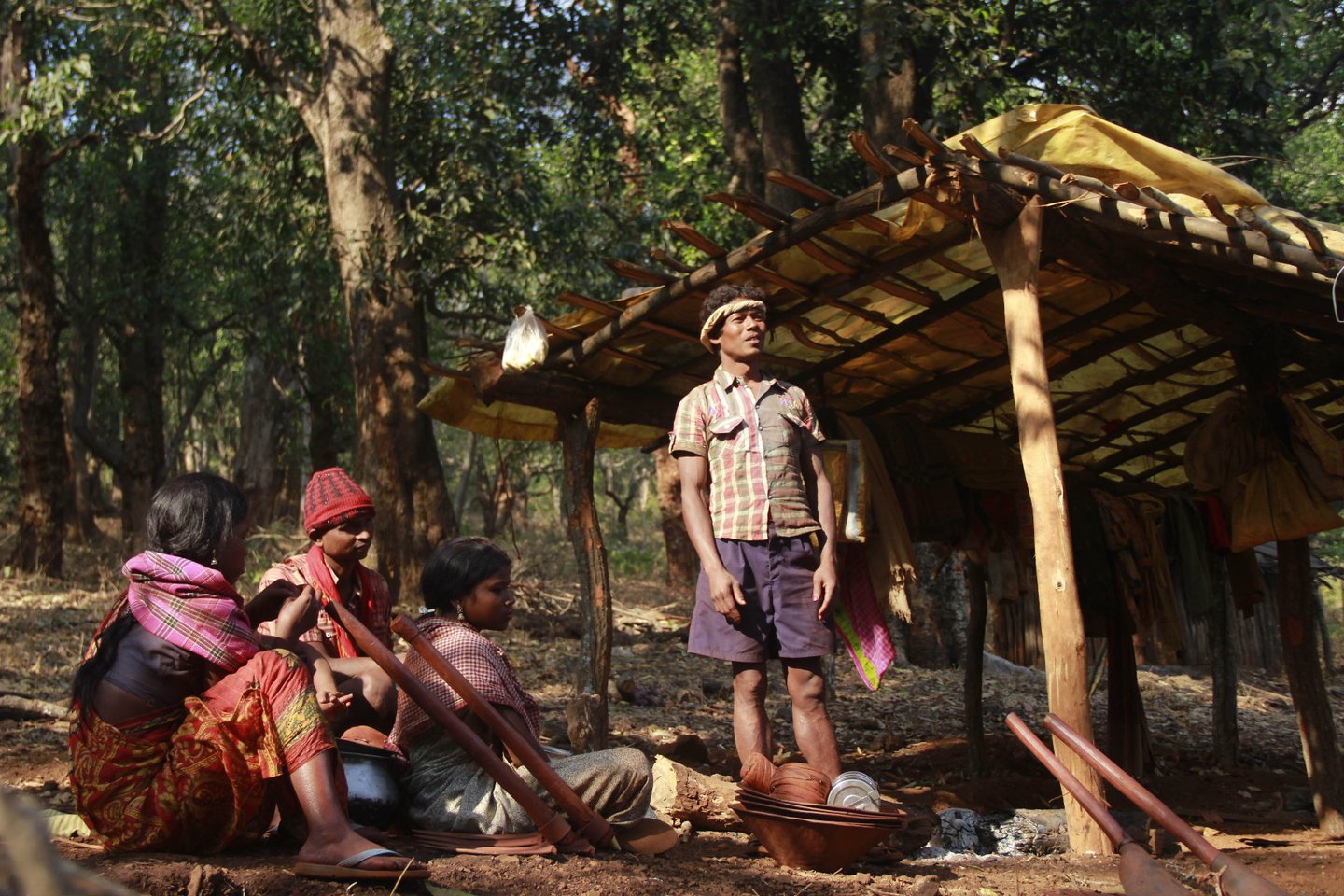 Over the past decade, fuelled by a commodity boom led by exports to China, the iron and manganese ore-rich forests of north Odisha’s Eastern Ghats have seen an unprecedented rush to mine. Much of this mining—as a detailed indictment by a former Supreme Court judge’s commission has laid out— violated a raft of laws and regulations, severely despoiled the area’s complex eco-system, and resulted in windfall profits for miners at the cost of the public exchequer.

In the state government’s own belated admission to the Justice M B Shah Commission, ore amounting to Rs 59,203 crore was illegally mined through the decade. To provide perspective, this is almost a fourth of the state’s Gross Domestic Product.

On the ground, the loot is encouraged as much by broken laws and opaque governing, as by the state’s traditional contempt for marginalised adivasi communities. The latter make up the bulk of the local population, and are given little say in decision-making around mining projects, and assessing their severe impacts.

The Shah Commission’s report was tabled in Parliament on February 10, but saw no discussion. In its action taken report, the Central government, including the Union Ministry of Environment and Forests (MoEF), said it is taking measures to verify the illegalities, such as mining in forest areas without the necessary clearances.

The state government told the commission that it had issued 146 recovery notices to mine lease holders who have illegally mined iron ore and manganese. An official in the state’s Directorate of Mines said this week that this money was yet to be recovered—some lease-holders had moved local courts for stay orders, making the recovery of the assessed amount sub-judice, while in other cases proceedings are still under way.

Additionally, the state government has steadfastly countered the Shah commission’s recommendation for a probe by the Central Bureau of Investigation in several egregious instances of illegal mining—a demand that Prashant Bhushan, counsel for the non-profit Common Cause, is reiterating in a public interest petition being currently being heard by the Supreme Court.

According to Biswajit Mohanty, a wildlife and transparency activist who has been raising the issue of illegal mining in Odisha since 2008, the absence of meaningful action by local authorities is evidenced by the fact that “despite thousands of crores of public property being looted, not a single public servant or private official has been sent to jail, not one mining license revoked, and not a rupee recovered till date.”

These images from Sundergarh district’s Bonai region show the contrast between the mined landscape, and areas which are yet to be mined. 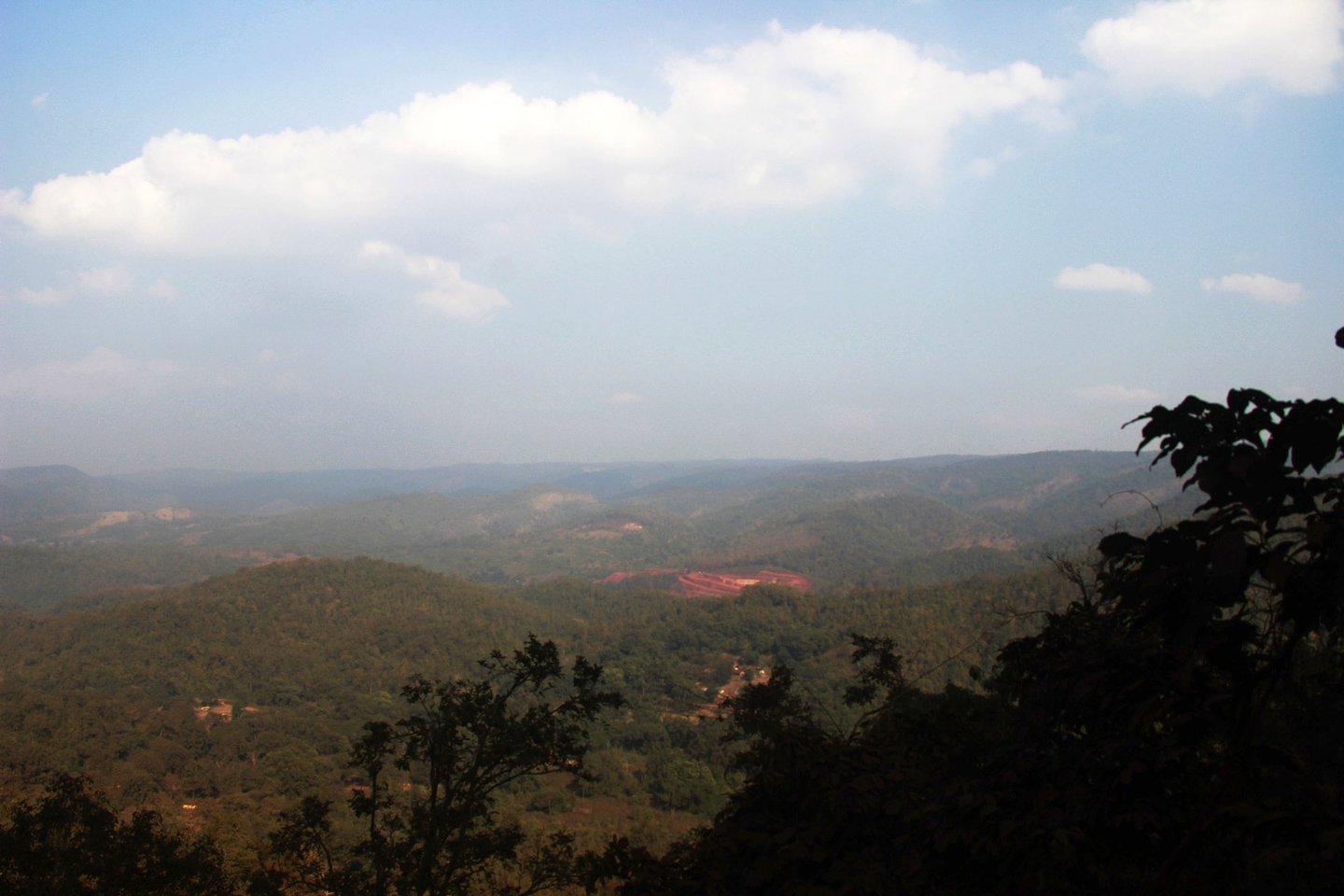 North Odisha’s rich deciduous forests and mountain ranges hold a third of India’s haematite iron ore reserves, making it the country’s leading iron ore mining area over the past decade, as well as the site of the state’s largest corruption scam. 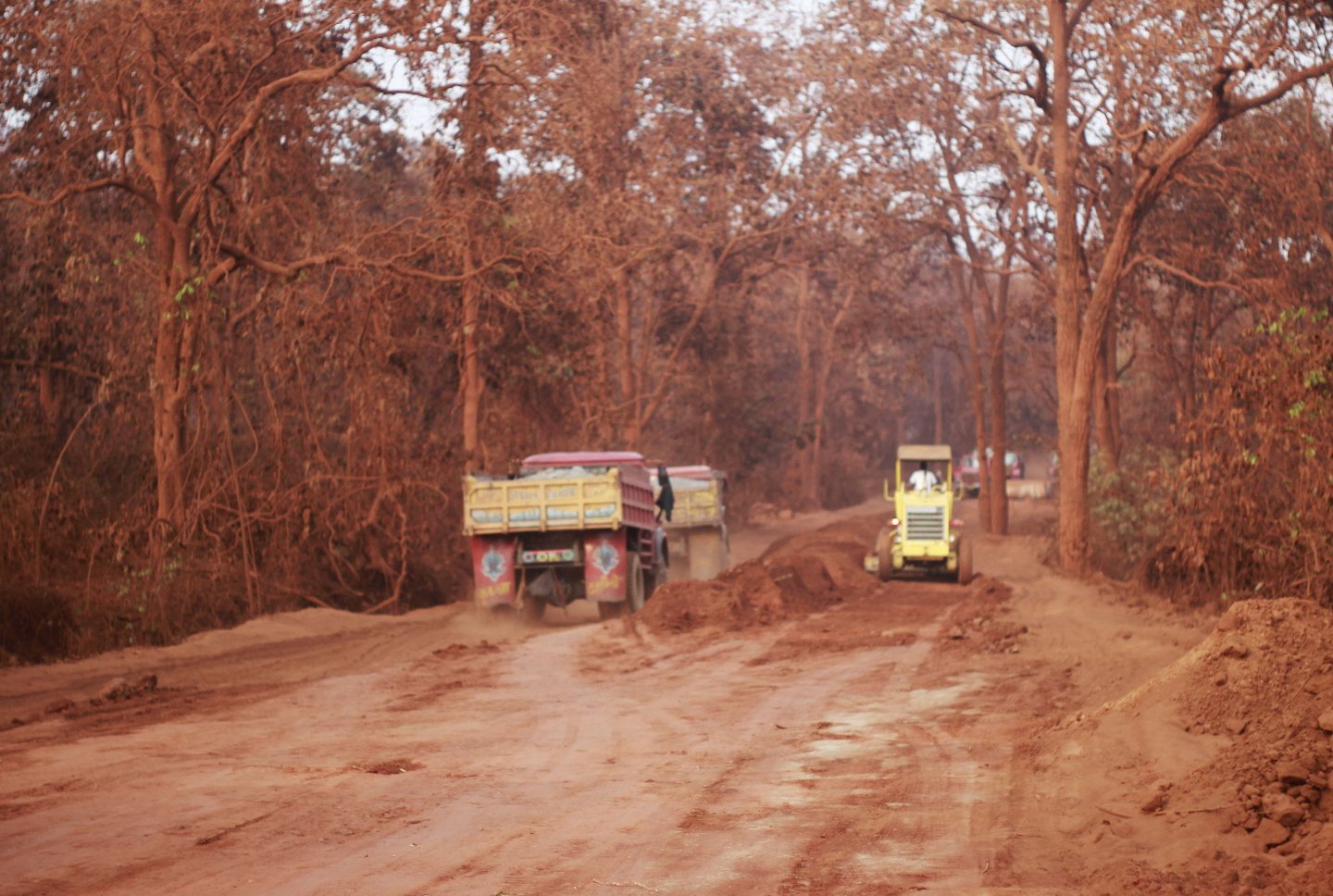 A mining company constructs a road through the forests around the mining town of Bonai. According to official records, iron ore and manganese are being mined over 45,000 hectares (ha) in north Odisha, of which 34,000 ha constitute forested area. 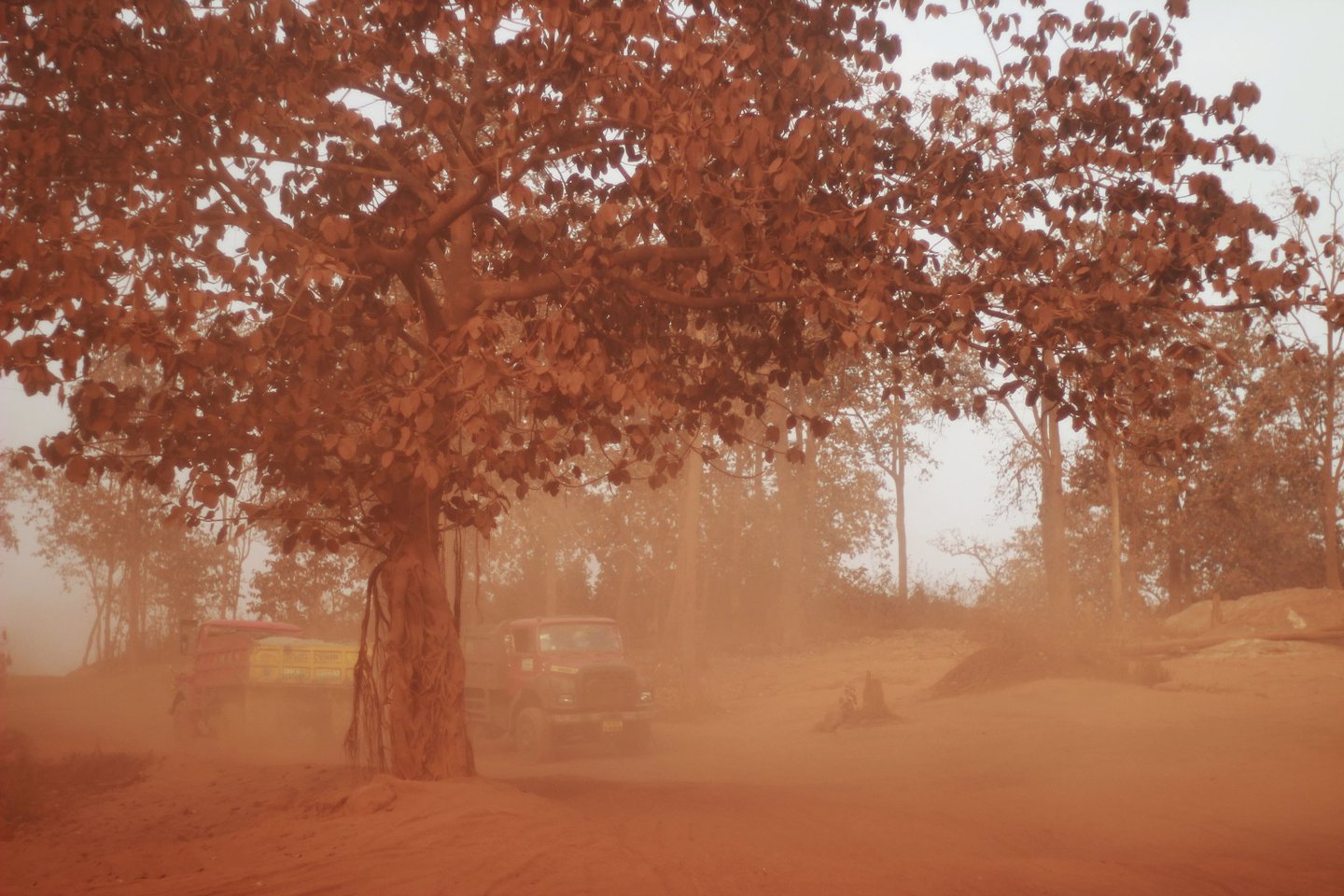 Truck traffic ferrying iron ore dominates the area’s roads, edging out local pedestrians. They only halt on Sundays, after villagers agitated for this weekly break so that they could use the roads to attend church and visit markets. 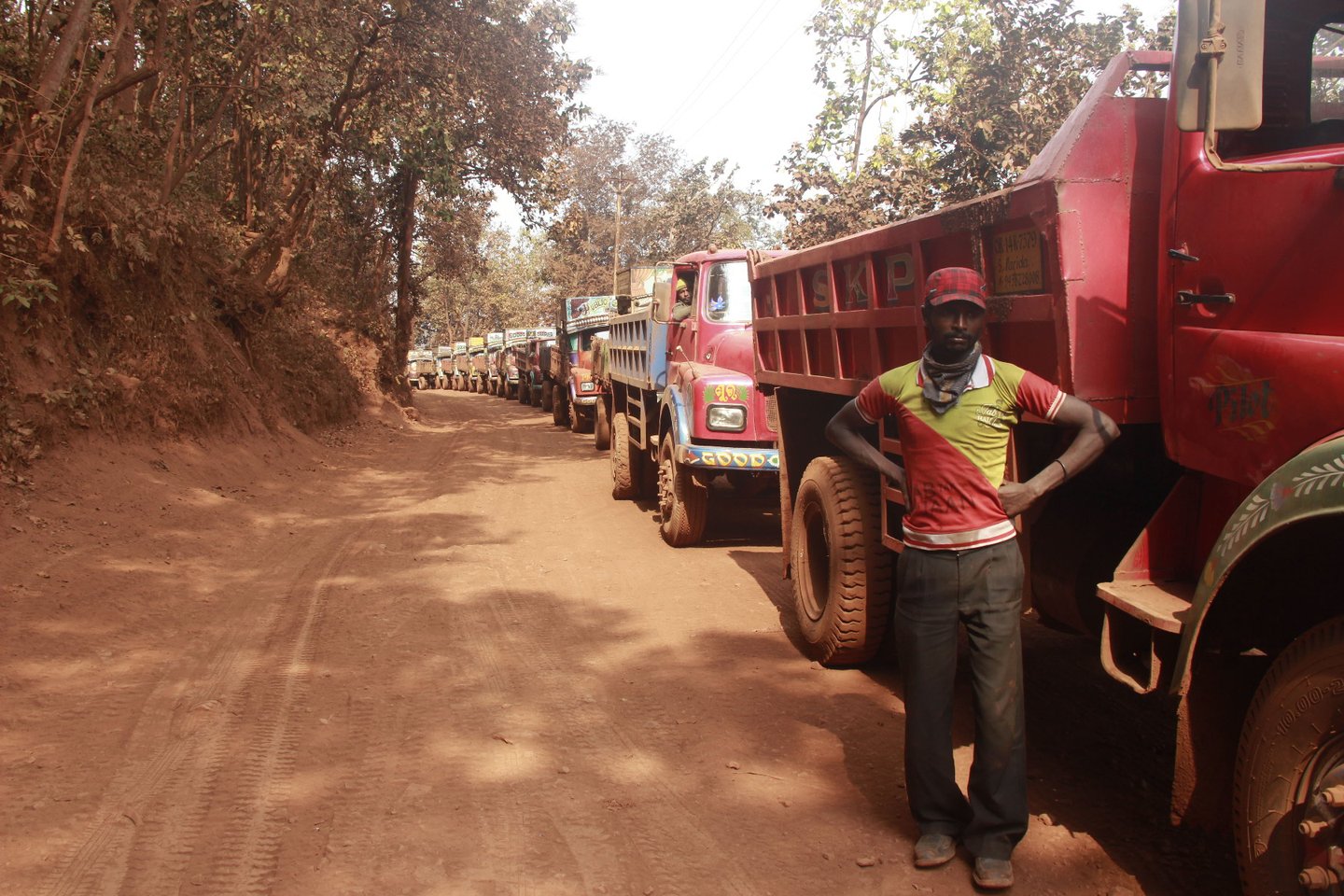 Trucks jam the road leading up to the mines in the Kurmitar mountain range. The Shah Commission estimated that at current rates of extraction, quality iron ore reserves in this region could run out in 35 years—the government rejects the claim. 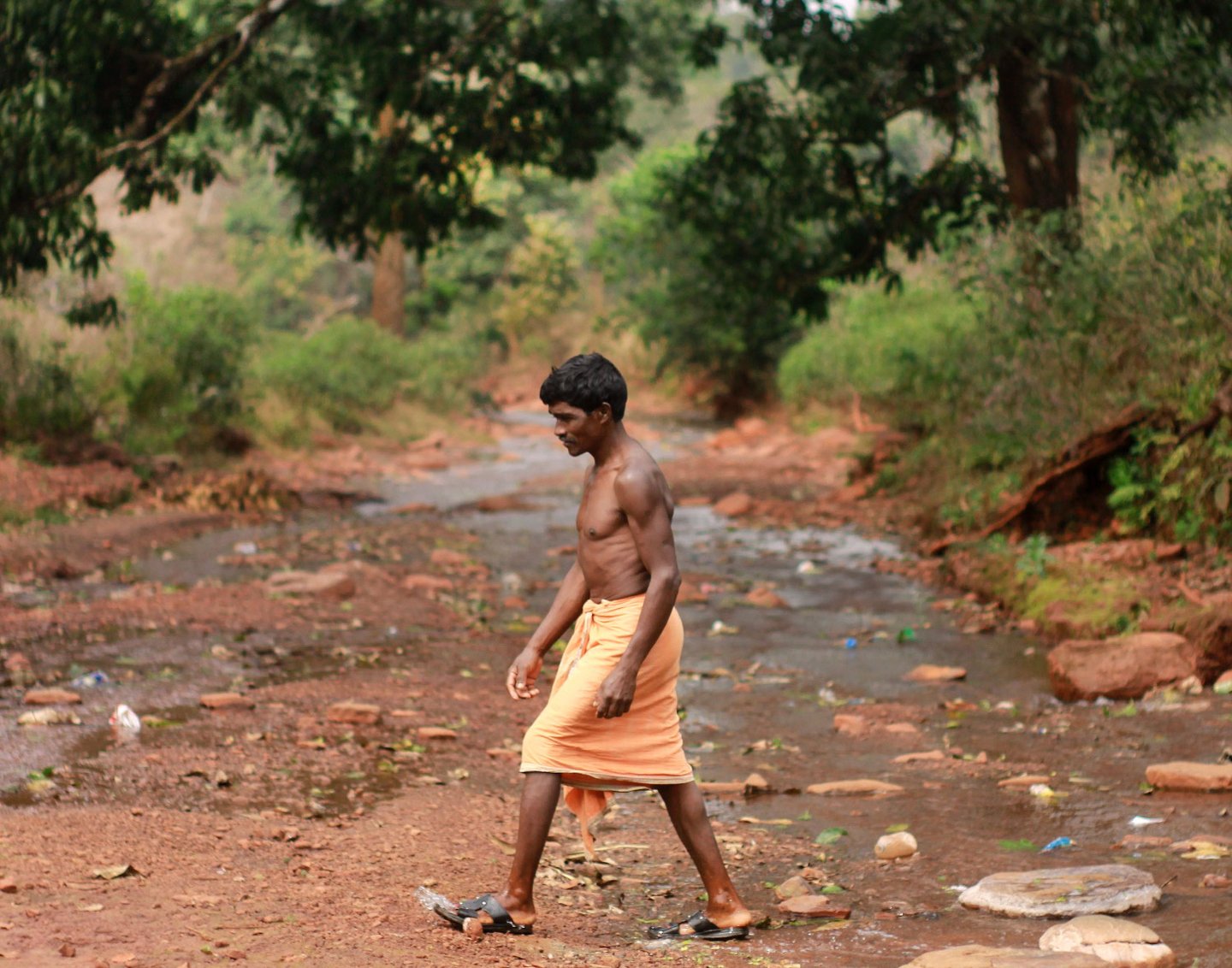 Prabhu Sahay Toppono, from the indigenous Pauri Bhuiyan community, walks across a dried mountain stream—the only source of water for his hillside hamlet on the edge of a mine. He says residents have seen the stream’s fish population disappear in the past seven years. During the rainy season, waste from the mine flows downhill into the stream, making it impossible to cultivate the kharif crop. “We took the red polluted water in a plastic packet to the officers and complained,” Toppono said. “They said they would act, but nothing happened.” 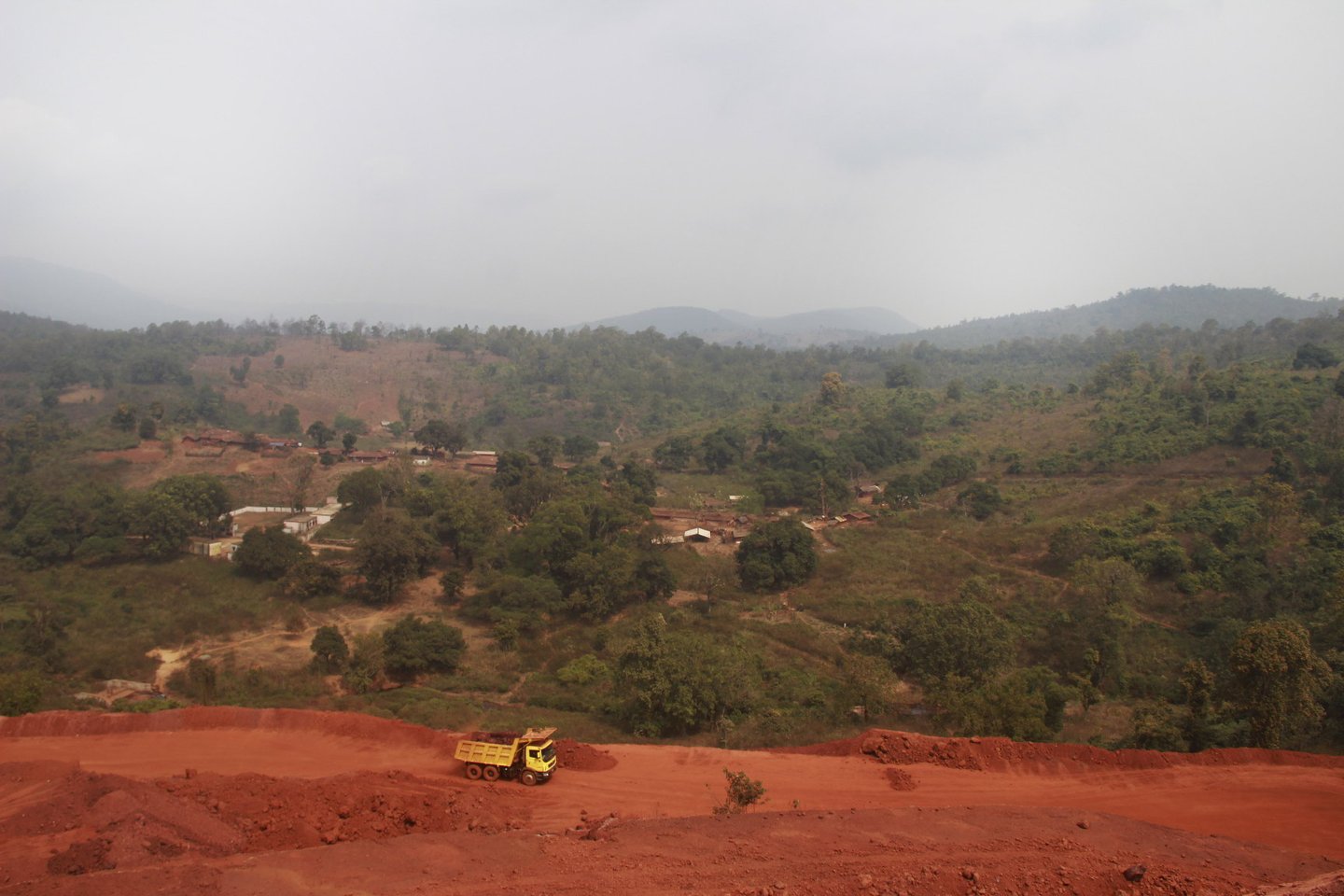 Remote villages, spread across large distances, ensure that the limited safeguards which adivasi communities have, such as participating in environmental public hearings or consenting to proposals to cut forests for projects, are effortlessly violated by mining companies and government officials. 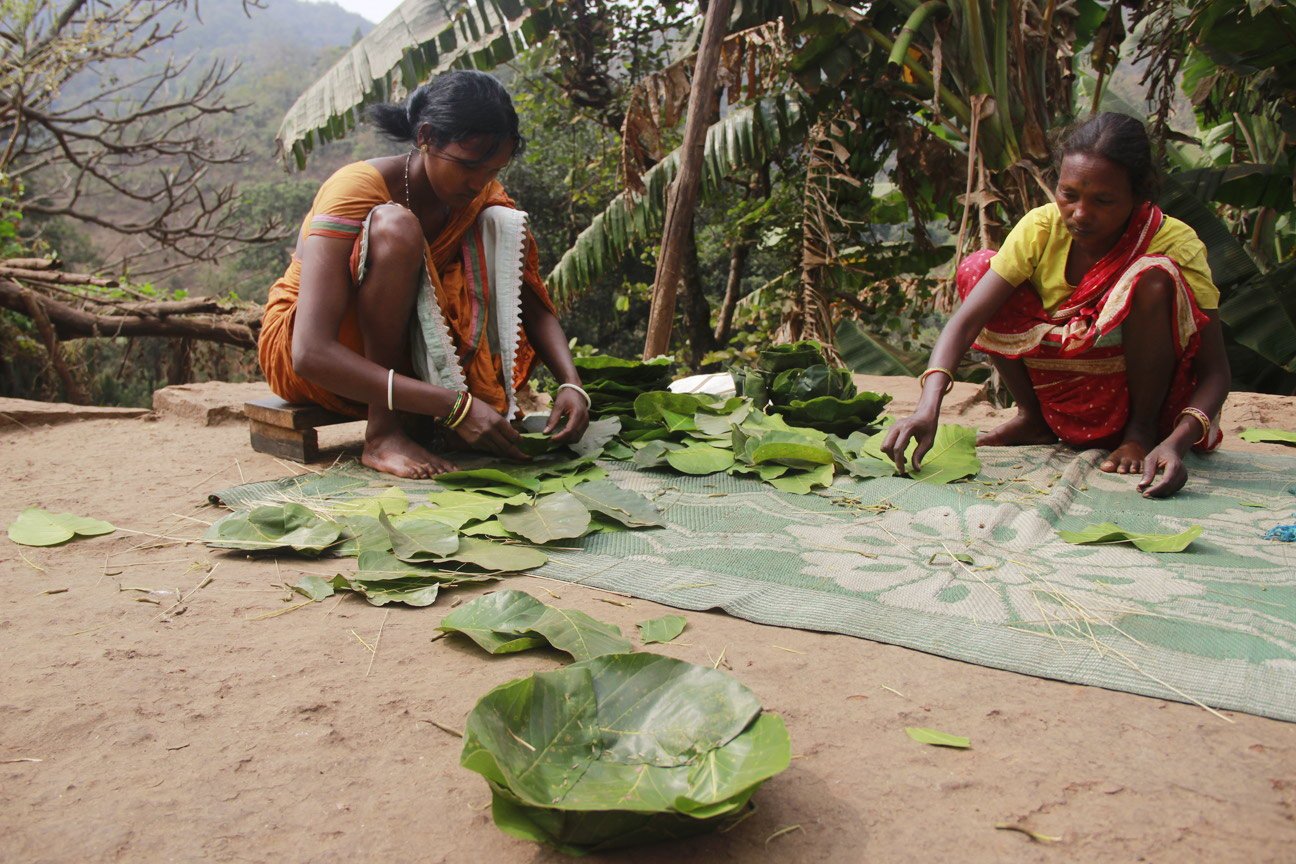 The area’s indigenous adivasi communities are deeply dependent on forest produce, including lac, mahua, and sal for food, fuel and livelihood.

After a nine-hour workday in the Orissa Mining Corporation’s iron ore mine, Jaitru Giri and his family return to the shack they live in, at the mine’s outskirts. The Shah Commission criticised mining companies for not paying labourers—overwhelmingly made up of adivasi men and women—a fair wage or benefits, despite making “super normal” profits from illegal mining. 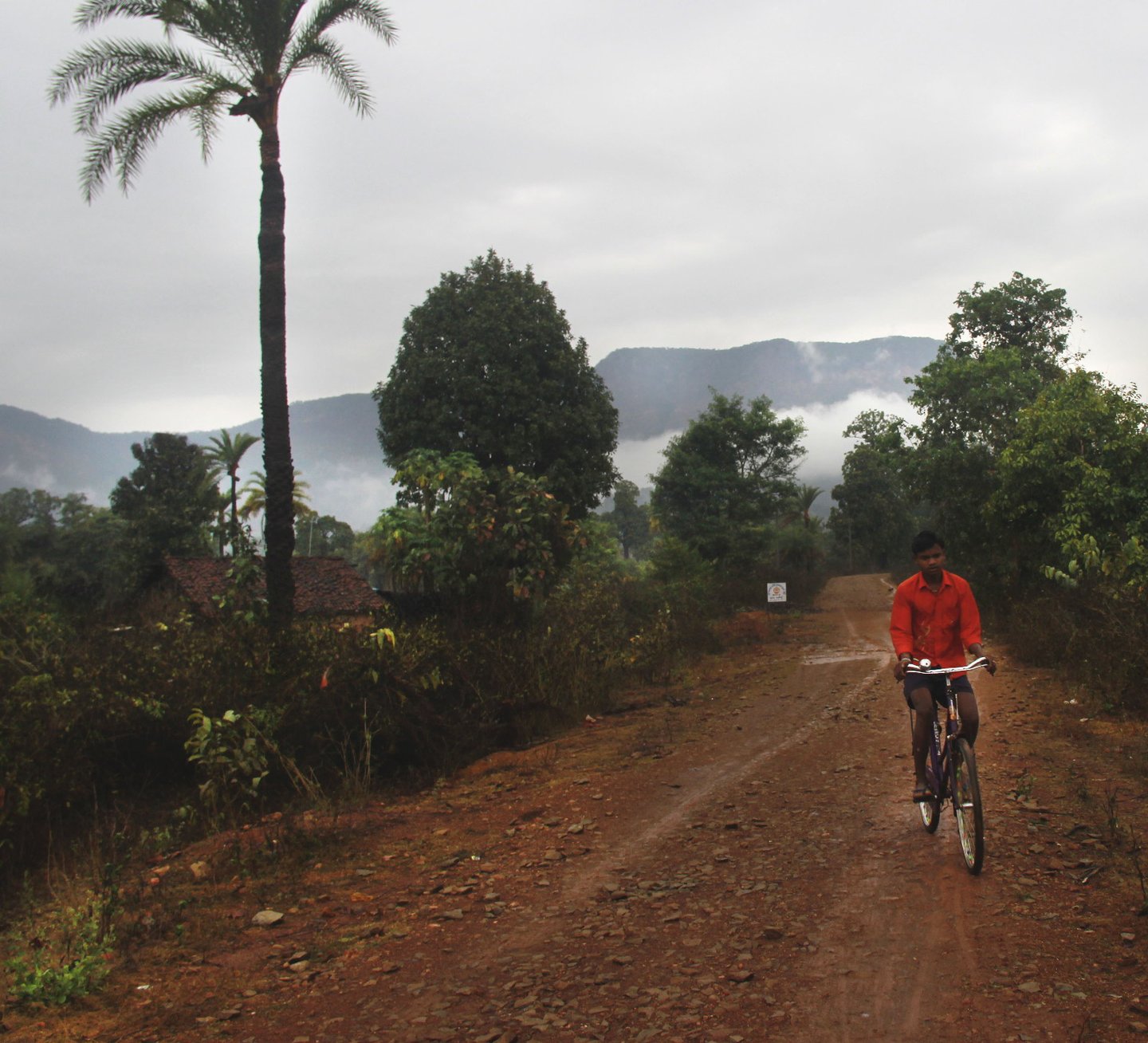 Clouds encircle the 3,000-metre high iron-ore rich Chheliatoka range. Villages around the range, such as Phuljhar pictured here, are opposing South Korean steel giant POSCO’s plans to start a 2,500 ha mine in the area, even as the state government has recently recommended mining. Residents said their primary fear was the mine’s environmental impacts on the area’s network of mountain streams, which currently irrigate their farms, allowing them to grow crops all through the year. 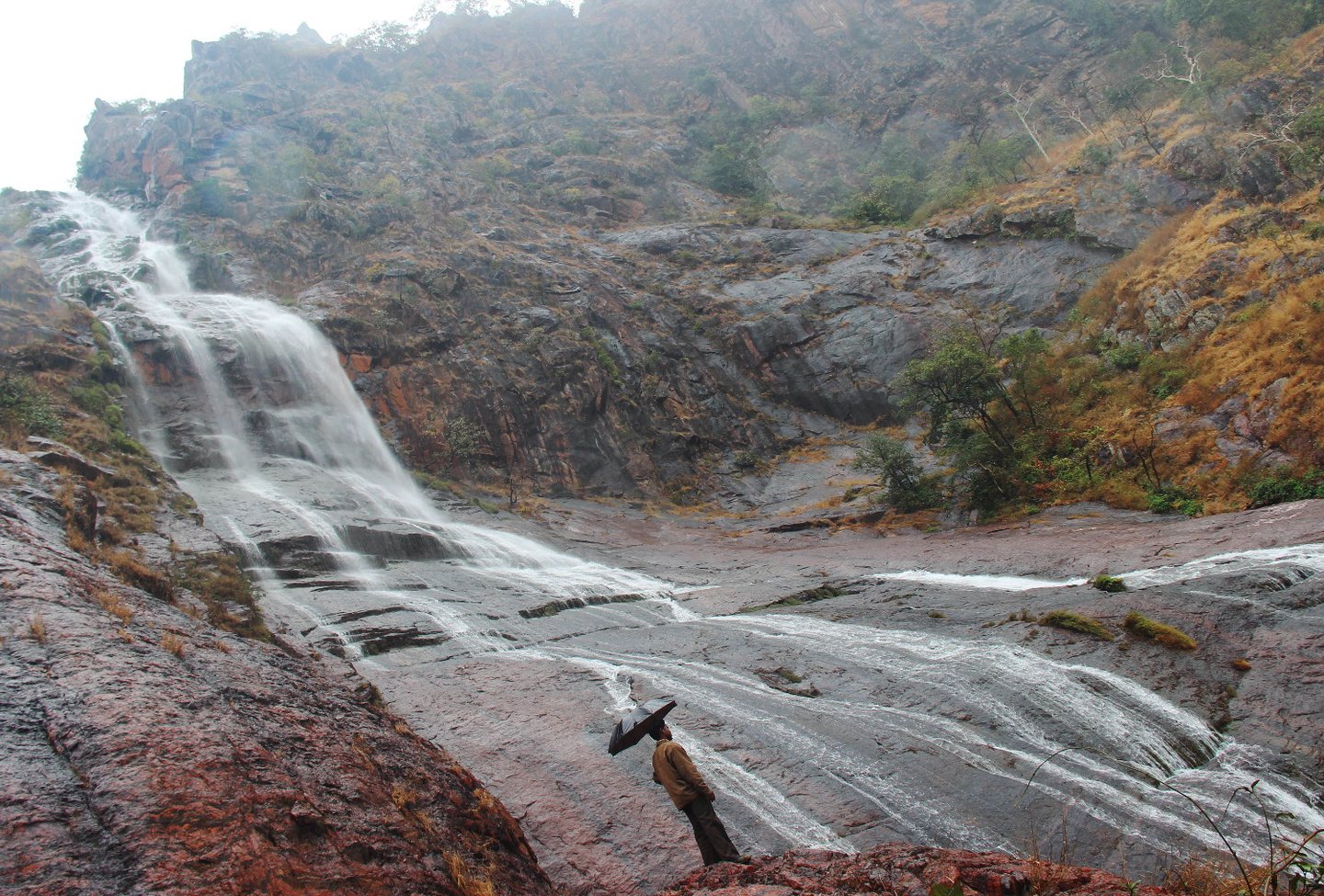 The Chheliatoka range is home to the Khandadhar waterfall – at 800 feet, it is the state’s second highest.

A version of this story first appeared in Down To Earth in May 2014 and can be accessed here.